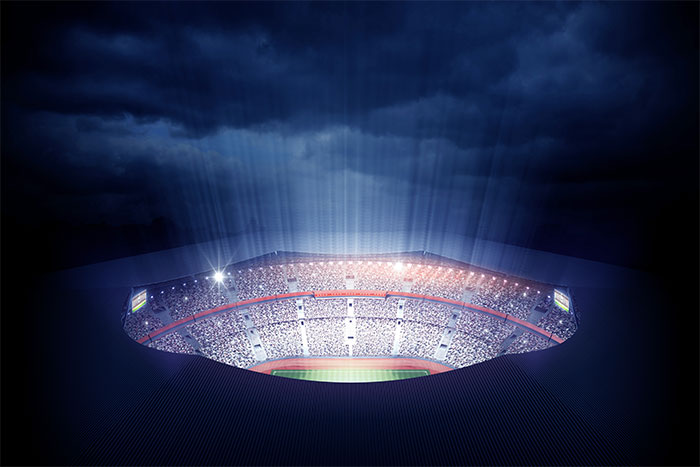 Maybe nothing binds us or divides as perfectly as sports, starkly offering only the far reaches of the emotional spectrum—love and hate, and nothing in between. Sports create villains and heroes, bringing us to our knees, to our feet, to unexpected tears.

And when the cheers have echoed off into the ether and the fields of play have emptied, meaning remains.

LeBron James said sports were his way out of a life that might have been waiting for him otherwise. Mike Singletary said his favorite thing about sports is simply the opportunity to play. And for dozens of Dickinson alumni, sports represent the professional arena they now inhabit.

Bringing Sports to the World

Dickinson alumni can be found in every corner of sports—from Andy MacPhail ’76, president of baseball operations for the Philadelphia Phillies, to Juliet Baker ’14, the Dalton School’s assistant volleyball coach and dance instructor. And all of them would probably agree with the assessment offered by Stephen Hildebrand ’99, NBC Sports’ vice president of technical & digital operations.

“There are worse things in the world than getting paid to think about sports all day,” says the two-time Sports Emmy winner and former computer science and political science major, whose group is responsible for delivering the company’s content—such as the Super Bowl and the Olympics—to pretty much any platform that can stream video.

“Sports are deeply personal and emotional for both the fans and the athletes, and … it’s an honor and privilege to be able to bring those moments to people across the country.”

With Super Bowl LII and the Winter Olympics now in the rearview mirror, sports fans might be turning to Major League Baseball, the NBA playoffs or the PGA Tour. Representing the tour is Kirsten Nixa Sabia ’92, vice president of integrated communications, who touts diverse facets of her Dickinson experience.

“Playing a Division III sport called for passion; writing for The Dickinsonian allowed me to get out of my comfort zone; belonging to Delta Nu instilled a spirit of volunteerism and a sense of community; studying abroad inspired a sense of adventure and comfort for travel,” says Sabia, a former soccer player and political science major who notes that Dickinson taught her how to change course, adapt and be comfortable doing so.

"I credit my time at Dickinson in large part to who I am today.”

And so does Brian Jankovsky ’99, director of entertainment & sports partnerships at Google.

“What’s always jumped out to me about a liberal-arts education is that it offers a flexible and creative learning environment that gives students the opportunity to pursue their passions,” says the former American studies major, who notes that flexibility comes in pretty handy in a burgeoning realm that he says has “no playbook. The faculty essentially worked with me to create a custom curriculum that allowed me to pursue my interests but still grow and learn in areas like writing and public speaking, which are transferable to all facets of life.”

When someone who had a great college experience gets to relive it, to an extent, by working in a collegiate atmosphere, and then pass down what they’ve learned to the next generation of students and student-athletes, it’s a serious win-win. Dickinson has more alumni in such roles than can be easily counted, but Susan Baldwin Troyan ’88 is a great place to start.

“I’ve never looked at my job as a ‘job’; I’ve always looked at it as a lifestyle choice,” says the former Red Devil basketball player, who’s in her 30th year as head basketball coach at Lehigh University.

“I love competing, I love working with student-athletes who truly embody what it means to be successful in the classroom and on the basketball court, and I love being able to make an impact on young people’s lives.”

A common thread emerging is students who had a great college experience becoming adults who want to make a difference to younger athletes in their spheres.

“I get to work with some of the best and brightest people anywhere who are all passionate about one thing—providing the best opportunities for student-athletes in college and beyond,” says Eric Hartung ’90, the NCAA’s associate director of research for Division III.

Like Hildebrand (who met wife Danielle Perreault Hildebrand ’99 at Dickinson), Hartung met wife Heather (Hoover ’91) while an undergrad. And beyond the obvious benefit of that, Dickinson keeps on giving.

“When I look back on my Dickinson experience, I’m deeply indebted to the notion of seeking intersections. Why couldn’t I find a career where I could combine everything that I was passionate about—sports, research, higher education? It took a little while, but I did it.”

Connections like that seem to define someone like Chris Cox ’15, a former Red Devil basketball star and international business & management (IB&M) major who is now Dickinson’s assistant director of the McAndrews Fund for Athletics—a position that combines Cox’s love of sports and his alma mater.

“Being able to talk about Dickinson is my favorite part of the job,” says Cox, whose new career at his old home allows him plenty of opportunities to reminisce. “It’s no pitch. It’s not forced. Everyone I encounter can have an organic conversation about how Dickinson shaped them, why they chose it or why they decided to let their children attend. I just ride that wave.”

Riding a wave of pure professional athletics engagement is Kiki Jacobs ’89, who has worked her way up through positions and institutions to become athletics director at Roger Williams University. “The liberal arts makes you take courses in all areas of studies,” says Jacobs, an economics and political science major and swimmer at Dickinson. “Careers in athletics vary greatly. We need people as coaches, administrators and compliance experts, and in finance and sports communications, just to name a few. A liberal-arts education has all of this.”

And Jenna Lamb ’16 is mounting a dual-pronged attack as director of women’s soccer operations at Santa Clara University and as coordinator with the U.S. Soccer Federation. Her jobs get her out from behind a desk, taking her all over the U.S. and to Belgium and Australia, where the former IB&M major works with both soccer legends and future soccer stars. And Dickinson has made it all a little easier.

“I often feel that the liberal arts are beneficial because they provide such a well-rounded education. I can chat with people about differences in international business cultures, but I can also talk about some aspects of Buddhism or … how to identify different hawks,” she says with a laugh. “For me, it just means that I can find more ways to connect with people.”

‘Dickinson Gave Me That’

Garrett Horan ’12 is another alum who seems to have found the perfect career to extend his Dickinson experience into the professional realm, as baseball operations senior coordinator with Major League Baseball. “My experiences as a [Dickinson] baseball player have obviously translated nicely into my current profession, but it’s definitely the leadership skills and ability to work effectively with a group that stand out,” says the former political science major. “It certainly helped me and gave me the confidence to pursue my passion for baseball as a career after I graduated.” Working out of the Office of the Commissioner, Horan feels lucky to pursue a passion as a profession. And he’s definitely not alone.

“My playing career ended a long time ago, and this job allows me to stay in touch with something that has been a part of my life since I was 6 years old,” says Eric Amsler ’99, director of scouting and assistant director of player personnel for the NBA’s Miami Heat. “I was a psychology major at Dickinson, and believe it or not, the major is well suited for what I do. Not only am I dealing with different personality types of people in the office—agents, coaches, etc.—but I have to learn the makeup of future players who could be a part of our team.”

Two other Dickinsonians—both with the NFL—are equally well acquainted with the futures of their teams, in uniquely different ways. Scott Cohen ’91 is an assistant coach and opponent analyst for the Baltimore Ravens. And besides watching football nonstop to gather opponent information, Cohen builds the future of the organization in another way, through hiring interns.

“I found that the best interns and the best future workers in the NFL that I’ve been associated with are people who came from liberal-arts backgrounds, and particularly Division III football,” says Cohen, who is deeply involved with Dickinson’s new Alumni Football Leadership Council for fundraising, recruiting, networking and mentoring. The whole package—athletics and academics—is something Cohen sees as giving Dickinson athletes a leg up.

“Generally the big picture views, the multidimensional views that we develop going to a school like Dickinson translate well to the work environment.”

Like Amsler, Mark Gorscak ’79 has found that a background in psychology has served him well as an NFL scout, a position he’s held with the Pittsburgh Steelers for the last couple of decades.

“I wouldn’t be where I am without Dickinson, number one, that’s the main thing,” says Gorscak, who served as a Dickinson football coach in the 1980s and has several notable claims to fame. Gorscak might be a familiar face to anyone watching the annual NFL Scouting Combine, where college football players showcase their raw skills for NFL teams. He’s been the starter at what many consider the marquee event of the combine—the 40-yard dash—for 15 years. He also has two Super Bowl rings and happened to be the center hiking the ball to Joe Montana in high school. But for Gorscak, who remains actively involved with the college, a big part of his history was made in Carlisle.

“The relationships I made with people, they will be with me for the rest of my life,” Gorscak says. “They’re lifelong friends, and we always talk, and we still get together. Dickinson gave me that.”