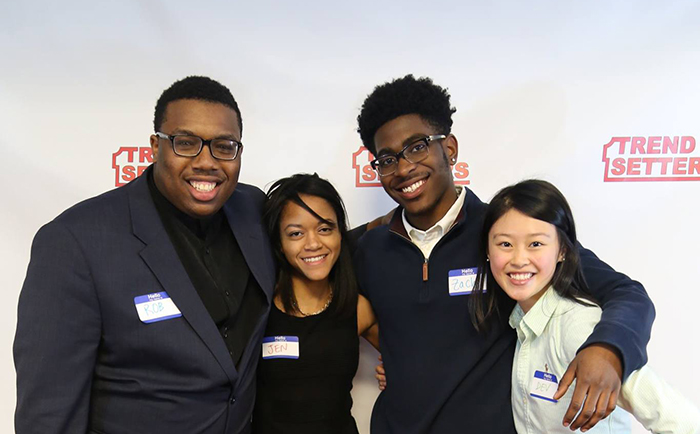 Toni Ortega ’18 (international business & management, policy management) values hard work and self-sufficiency, so when it came time to ask for help, she hesitated, unsure how to proceed. That made it hard to build close relationships with professors and advisors. Zachary Penny ‘18 (biology) is also industrious and resourceful, with a track record of academic success. Still, he couldn’t shake the feeling that his classmates were better prepared for college and that maybe he just didn’t belong.

“It was very easy for me to feel as though I did not deserve to be here,” he recalls.

These are common experiences for first-generation college students, the first in their families to attend college. It has nothing to do their abilities and everything to do with cultural difference, say scholars who study these boundary-breakers, like Senior Associate Provost of Academic Affairs Brenda Bretz.

“A college campus has a unique culture that’s geared to middle- and upper-class norms, and there are all of these rules, expectations and terminologies that students from college-educated families learn by osmosis,” but that first-gens need to learn on the fly, explains Bretz, a first-gen whose research focuses on this group. “So while first-gens are absolutely qualified to be here, they struggle to catch up. It can take a while for them to figure out the rules, and some never do.”

No one understands the struggles of today's first-gens better than educators like Bretz, who can draw from personal experience while helping these students adjust—except, perhaps, an upper-level student who’s just weathered the storm. Dickinson is bringing those two powerful resources together to provide the 77 first-generation college students in the class of 2021 the information, tools and supportive peer network they need for success.

The definition of “first-generation college students” can vary slightly; at Dickinson, they are students whose parents do not have four-year college degrees (this applies to one parent, in the case of single-parent families, and both parents in the case of two-parent households). As the demand for a college-educated workforce has grown in recent decades, so too has the number of first-gens who enroll at four-year institutions across the U.S. These students make up about 13 percent of Dickinson’s class of 2021, based on information included in the cohort's Common Application pool.

They are a heterogeneous group: Some grew up in small towns; others grew up in urban, suburban or rural areas. Roughly 60 percent of Dickinson’s class of 2021 first-gens identify as female, and 61 percent identify as students of color. Nearly 30 percent hail from non-Northeastern states. Some, but not all, are Posse Foundation scholars. Most come from working-class backgrounds, but not all.

Simply by entering college, these first-gens—like international students, who share a few of the same challenges—have already proven that they are resourceful and visionary, and as a group they are more likely than the average student to graduate within four years. If successful, they will become masters of intercultural competency and cross-cultural communication. So what gets in the way of a smooth transition to college life?

Some challenges are deep-rooted. The importance first-gens usually place on independence is a great strength, but it can get in the way when, as in Ortega’s case, they need to ask for help. While peers from professional families are primed to see extracurricular and co-curricular activities as pathways to skill-building and networking—having been shuttled to sports practice and play rehearsals since childhood, often by parents who belong to professional organizations—first-gens often don’t see the point of joining in. They feel they are already too busy with schoolwork and jobs. They also believe that success should be earned by merit alone and may miss connections that could lead to a fruitful internship.

Small knowledge gaps also factor in. A self-sufficient first-gen might think that office hours are a time for professors to get grading and lesson plans done, and they might not feel comfortable “interrupting” their elders during these times. First-gens who graduated from schools in lower-income communities typically haven’t enjoyed the same educational opportunities and experiences, like field trips and hands-on learning experiences. While classmates from private schools likely already know their way around a syllabus, first-gens can mistake it as a guide for the professor’s use and fail to read it. And although they go to class, do all their reading and turn in homework on time, they can be blindsided when a test arises or a paper is due.

When roadblocks like these come up, students like Penny conclude that they do not belong and cannot keep up. The first step: helping them understand that some of their challenges are culturally based and that assistance is out there. Starting this fall, that process begins before the launch of the academic year.

During the summer, class of 2021 first-gens received an invitation to first-gen information sessions and to a luncheon, held the day before Convocation, during which they met fellow first-gen students, professors and administrators. These included members of the student group Trendsetters, founded last year by Robert Hill ’17 with Penny and class of 2017 members Devlynn Chen and Jennifer Zapata.

Throughout the academic year, Trendsetters will continue to provide peer-to-peer support through weekly meetings, information sessions and social events. Working under Bretz’s guidance, these student leaders also will put a formal peer mentoring initiative into action and present workshops on physical, mental and spiritual wellness.

An interdepartmental working group, formed last year and co-led by Bretz and Associate Vice President for Student Leadership & Campus Engagement Becky Hammell, is also devoted to the first-gen population. Most of the administrators and educators in this group are first-gens who formally and informally help students throughout the year. Using the resources available through the Mellon Grant for Civic Engagement, the working group launched a faculty study group, led last spring by Bretz and Donna Bickford, director of the Women’s & Gender Resource Center, to help more faculty members join the effort.

“A lot of the professors in the group were first-gens, and you could just see the lightbulbs start to go off as we talked about some of the common first-gen experiences,” says Bretz, who will co-lead a second study group this year. Armed with this knowledge, the professor whose first-gen student did not turn in her paper after receiving comments for revision, for example, can now understand that the student simply may not know that a revision is possible, let alone expected. A quick inquiry—and an explanation about the syllabus and office hours on the first day of class—clears up the misunderstandings.

Each of these levels of support is necessary, says Zapata, who stresses that the community she found with fellow Trendsetters was as vital to her success as the guidance she received from academic advisors, professors and mentors.

Hammell, a fellow first-gen, agrees. “So there are a lot of points of access, but first-generation students may not know about all that’s available to them to make this an incredible experience,” she says, adding that for those first-gens from lower-income backgrounds, financial concerns can intensify the pressures, often invisible to those on the outside. “We’re all here to help them comfortably access those resources so they can find their place here and see themselves as part of the fabric of the college.”

Penny looks forward to helping to make that happen. Asked for his advice to the newest first-gens on campus, he draws the big picture.

“The best advice I can give is to remember that they are not alone,” he says, “and that being a first-generation college student is something they should be proud of, as they set [an example] in their families and communities.”