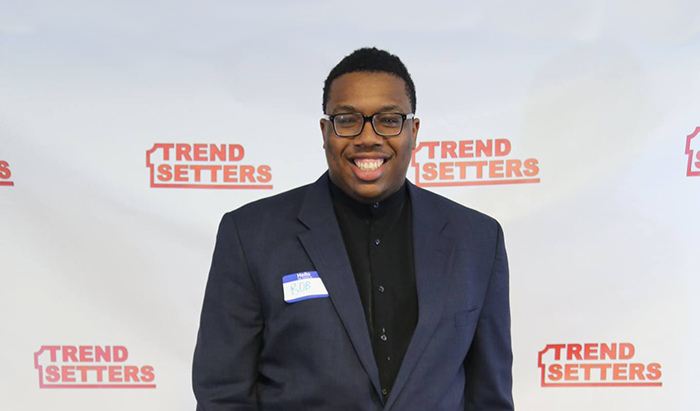 College life is an adjustment for all incoming students, but for first-generation college students, who may not enjoy the same supports and frames of reference, it’s a particularly steep hill to climb. That was the case for Robert Hill ’17, a first-generation student who came to Dickinson well prepared but initially struggled to find his place.

After taking part in a panel discussion during an event led by Sigma Lamda Gamma, Hill decided to give back by helping others make that difficult transition. He hashed out ideas with Jennifer Zapata ’17, Devlynn Chen ’17 and Zachary Penny ’18, and then drafted a constitution for a new student-run initiative, Trendsetters, providing academic and social support and a sense of community to first-generation college students. Trendsetters meets weekly, bringing first-generation mentors together with first-generation participants. Hill’s dream is to continue to aid others through work as college and career counselor and educator.

The Souls of Black Folk by W.E.B. Dubois.

I decided on a sociology major because sociology gives me a better understanding of the world around me. I came from an urban, low-income area that really restricted my views of the world. My sociology classes made realize the structural and systematic differences that have stopped people of the same race and social class as me from having the same opportunities as other people. I fell in love with narratives, perspectives and ideas one can obtain from sociological qualitative research. I learned so much from ethnographic research and sociological studies that I knew that I wanted to study sociology for my four years at Dickinson.

The academic quads in the summer.

Getting this close to graduation, because no one in my family made it this far.

The most important thing I have learned so far is that to forget to give back is a disservice to yourself more than anyone else. When I created Trendsetters, it was to make sure that no one felt the same way I did during my freshman and sophomore years of college. As a first-generation college student, I struggled tremendously—socially, academically and financially. It took a lot of resilience to grow into who I am today. In my senior year, I am reflecting on all the things I didn’t know but wish I did—things that no one told me but should have. As a first-generation college student, there are numerous trap doors you have to navigate to be successful. If I didn’t create Trendsetters, I would be subjecting yet another person to some of the same things that really hurt my Dickinson experience. That would be a major disservice to myself.

… everyone gets an equitable amount of resources; everyone has everything they need to be successful.

My dream is to work as a college and career counselor for students in low-income areas and, eventually, get my Ph.D. in sociology or education with a focus on race, maybe even teach at a college level after that.

Hear more of Robert’s story in the inaugural episode of 1st Up, a podcast by Brady Hummel ’17.