Taking It to the Next Level 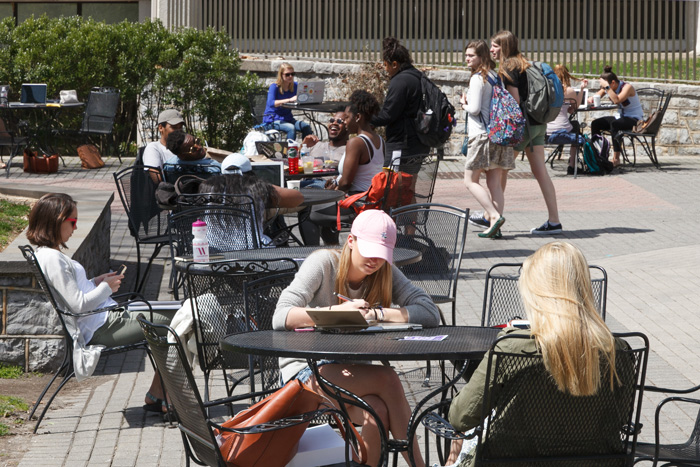 Dickinson once again celebrates its most diverse first-year class to date. At the same time, the college welcomes a new president committed to enhancing the intercultural competency of all students, faculty and staff.

Dickinson’s student body has seen remarkable increases in diversity and inclusion in recent years, with each new incoming class breaking records. Factoring in the class of 2021, student diversity has increased by an average of 100 percent during the past decade, with 82.3 percent more students of color in the class of 2021, versus the class of 2012, and 134.3 percent more international students during the same period. To ensure that members of the community are equipped to bridge intercultural gaps on campus and in the increasingly global world, President Margee Ensign has launched an intercultural competency task force.

Formed in June and led by Samantha Brandauer, associate provost and executive director of the Center for Global Study & Engagement, and Brenda Bretz, senior associate provost of academic affairs, the task force seeks to:

“It’s important work, and it’s baked into our core mission and our unique approach to global education,” says Brandauer, stressing that learning to communicate effectively within, and to flourish as part of, a diverse society begins not when students step onto a foreign shore to study abroad, but when they first arrive at Dickinson and become part of a diverse campus community. The task force is studying ways to make global-education and inclusion efforts even more visible, strategic, and holistic by providing a framework for all faculty and staff members to recognize, and act on, their part in this work.

The first steps are to take an inventory of the college’s progress so far and to explore models of intercultural communication competency-building. Then the task force will evaluate the approaches and determine the best ways for Dickinson to go forward.

To enable members of the college community to join in, the task force is sponsoring a series of workshops. An email, providing information about the workshops, will be sent to the campus shortly.

As Bretz notes, we know this is a priority for us, and the Dickinson community understands how important it is both to recognize and learn from the greater variety of people now on campus. As we articulated in the Report on Strategic Direction, we seek a campus where every member of the community experiences “full citizenship, in principle and practice.” To do so, we must better understand our own actions and reactions to that diverse voice of each individual and turn our good intentions into powerful action.

It boils down to practicing a series of small, intentional acts based on new intercultural insights, Bretz says, recalling a lesson learned during a recent faculty study group on first-generation college students. Instead of building rapport by asking students, “So where are you traveling for spring break?”—and unintentionally alienating students without the means to travel—they learned to pose a more effective question, like, “So what are your plans?”

“These aha! moments are little, but they're powerful,” Bretz explains, “because they can affect a huge number of students in very positive ways.”