A Career for the Books 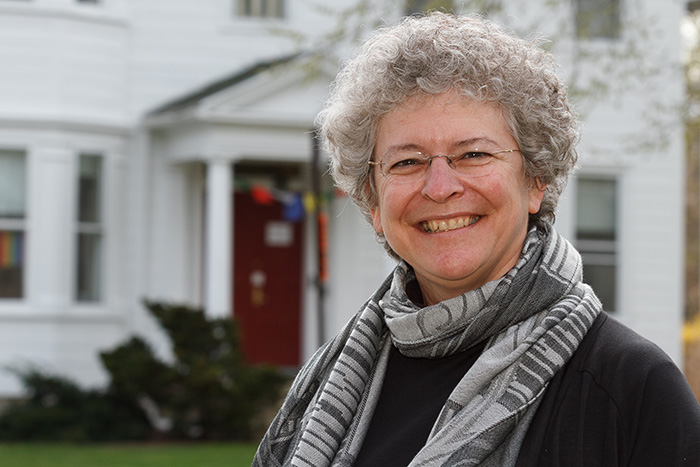 Donna Bickford was a teenager when she first declared herself a feminist. It was 1970s America—second-wave feminism was very much in the air—and to her, this declaration was a pathway to independence, relevance and rebellion. It wasn’t until graduate school that she came to understand what “feminism” really means, thanks to the power of literature.

Today, Bickford is the director of the Women’s & Gender Resource Center. During a recent faculty research lunch, she discussed her past and ongoing scholarship, which draws from social justice, social science and literature; her love of teaching; and the key books that inspired her along the way.

A first-generation college student, Bickford’s scholarly journey began with her first undergraduate course in 1978. It took 14 years of night courses at several community colleges and universities before she would get her degree in English from Eastern Connecticut State University, all while working full-time during the day. Another eight years later, she had completed her Ph.D. at the University of Rhode Island.

Bickford lectured at the University of Rhode Island for six years before accepting a position as director of the Carolina Women’s Center, University of North Carolina (UNC)-Chapel Hill. She excelled in both roles, and in 2011, she was named UNC’s associate director for the Office for Undergraduate Research, a position she held until joining the Dickinson community in January.

Bickford names Marge Piercy’s Vida, a novel set in the 1960s and 70s, as the book that offered her a peek beyond the media-filtered understanding of the women’s movement. That sparked an investigation into the ways in which other fiction written by U.S. and Latin American women can open readers’ eyes to the needs and experiences of underserved and oppressed persons, such as women of color.

Socially conscious detective novels by women come into special focus under Bickford’s lens, because she believes that the incremental ways in which information is meted out in these novels can raise consciousness in interesting ways. Specifically, Eulogy for a Brown Angel and Cactus Blood, both by Lucha Corpi, described the Chicano/a experience as well as the institutionalized racism and overt and covert violence committed by the criminal justice system. Sara Paretsky’s Tunnel Vision shed light on homelessness by telling the story of a woman who does not fit the stereotypical “homeless” mold.

Throughout her career, Bickford retained a passion for teaching, and her experiences as an educator have led her to publish on the ways in which campus activism and service learning can (and, in the years since, do) connect. At UNC she was involved in a number of anti-human-trafficking initiatives, including organizing a major conference on sex trafficking and helping to create the North Carolina Coalition Against Human Trafficking. She points to authors Patricia McCormick and James Levine as sources of inspiration.

More recently, Bickford co-published articles on the alt-ac phenomenon—the experiences of Ph.D.-holding college and university administrators who remain engaged in scholarship and teaching throughout their administrative careers. Her current book hearkens back to the author who sparked her feminist journey. Bickford’s forthcoming literary critique on the works of Marge Piercy is under contract with University of South Carolina Press and is expected to be published in 2017.

Asked about her current role, Bickford said that she is excited to do social justice and inclusivity work within the small, liberal-arts community, and she’s eager to begin teaching again in the fall, in true alt-ac style. “I’m having a wonderful time getting to know students and colleagues,” she says, “and learning what issues, challenges and areas of growth are most relevant to our varied college constituencies, so I can help build responsive strategies, programs and co-curricular initiatives.”