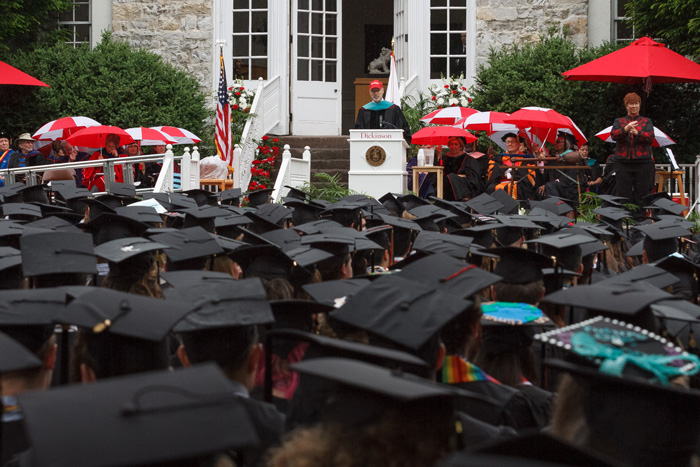 Graduates encouraged to balance individualism with social responsibility during Commencement

Five-hundred and twenty-seven students became graduates of Dickinson on Sunday, May 22, during Commencement, which marked the official end of the 2015-16 academic year. In addition to the presentation of student and faculty awards as well as the bestowing of three honorary degrees, the ceremony featured advice from Commencement speaker and Governor of Pennsylvania Tom Wolf, who encouraged students to balance individual success with social responsibility.

“We need you to be strong and free,” Wolf told members of the class of 2016, which features Dickinsonians from 36 states, the District of Columbia and 19 foreign countries. “And we need a strong society that helps you to be just that.”

Despite gray skies and a slight drizzle throughout the ceremony, Wolf assured graduates that a bright future lies ahead of them if they understand that blazing their own paths should not be opposed to strengthening the communities to which they belong.

“You will have to navigate your life between the twin challenges of life as an individual and life as a member of society,” he said. “And while there are conflicts between these two, they are not contradictory—they are mutually supportive. … Use the things you learned here to enrich your lives as individuals, pursuing your own dreams and your own life goals, but use these things, too, to enrich the social institutions that you will need to ensure that you will be free forever to pursue those dreams and life goals.” 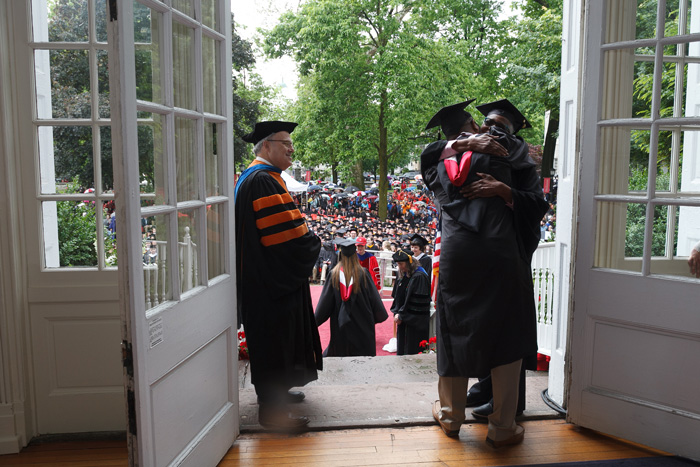 A student takes a moment to embrace Joyce Bylander, vice president and dean of student life, before making the ceremonial walk down the steps of Old West. Photo by Carl Socolow '77.

College President Nancy A. Roseman opened the ceremony by recognizing retiring faculty, a tradition she started last year. This year there was only one retiree, William Bellinger, professor of economics, whom Roseman recognized for 35 years of service.

John Dinsmore (international business & management), president of the class of 2016, announced Suman Ambwani, associate professor of psychology, as the winner of the Constance and Rose Ganoe Memorial Award for Inspirational Teaching. Awarded annually, the honor is determined by a secret-ballot vote conducted by members of the graduating class. 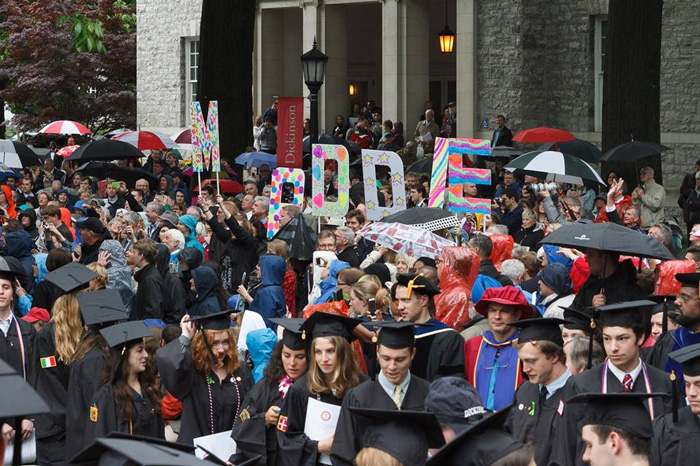 Additionally, four members of the class of 2016 received special honors:

During each Commencement since 2011, Dickinson’s Board of Trustees has chosen a Young Alumni Trustee from among nominated seniors to represent young alumni on the board. This year Ethan Andrews (economics) was selected and will serve a two-year term. 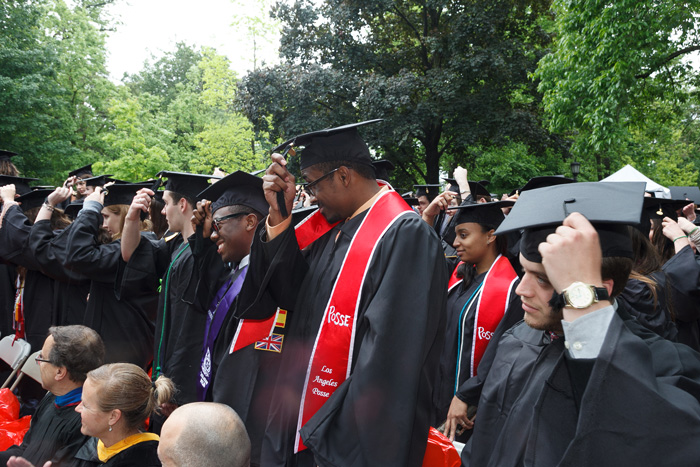 Students move their tassels from the right to the left as they become graduates. Photo by Carl Socolow '77.

The Sam Rose ’58 and Julie Walters Prize at Dickinson College for Global Environmental Activism was presented to Pulitzer Prize winning writer Elizabeth Kolbert. The prize recognizes Kolbert’s work as an author and journalist who has helped explain global warming and its impacts in such books as The Sixth Extinction and Field Notes from a Catastrophe: Man, Nature, and Climate Change.

Kolbert, who will visit Dickinson for a short residency in the fall, was unable to attend the ceremony because she was at her son’s college graduation. However, she prepared a statement for the class, which was read by Neil Leary, the director of Dickinson’s Center for Sustainability Education. Much like Wolf, Kolbert urged students to remember their larger obligation to the world around them as they set out on the path toward the future.

“If the world is to become a better place, it will be through the changes you help to make possible,” she advised graduates, noting that, like it or not, we are all actively changing the world—and its climate—with such ordinary activities as driving and turning on the air conditioning. With that in mind, she offered a slightly different “change the world” message to Dickinson’s class of 2016: “The great challenge for the next generation—for your generation—is, I think, not only to change the world, but also to figure out how not to.” 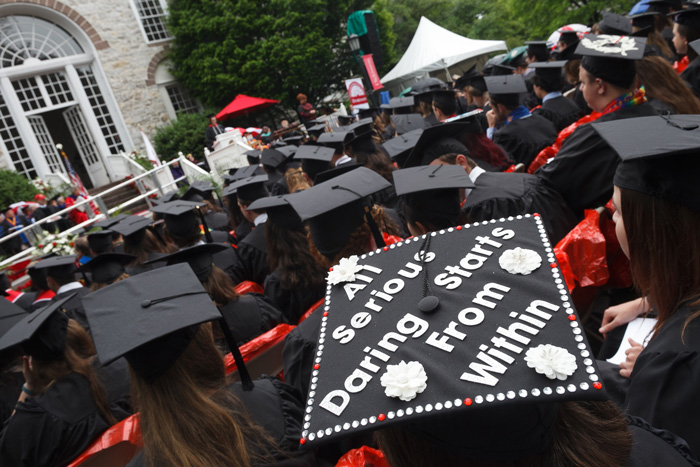