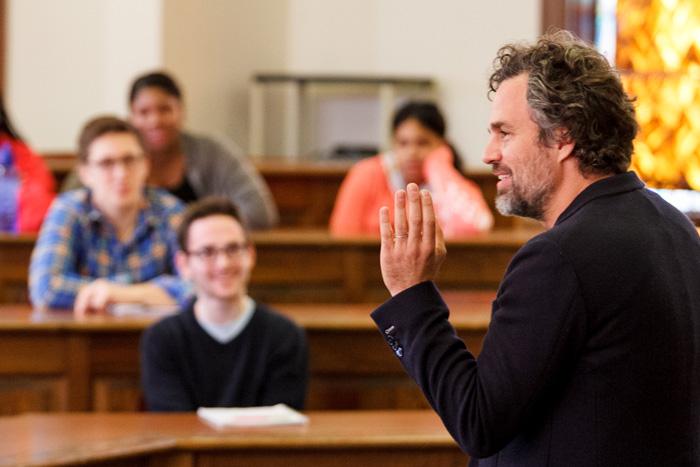 In the 2015 summer blockbuster The Avengers, Mark Ruffalo fought the good fight as a musclebound superhero who, when provoked, turned an angry shade of green. In real life, he’s more Bruce Banner than Hulk, but he’s no stranger to righteous anger, and he knows how to channel it to help effect positive change.

Ruffalo, a two-time Academy Award nominee and celebrated environmental activist, is the 2015 recipient of the Sam Rose ’58 and Julie Walters Prize at Dickinson College for Global Environmental Activism. He visited Dickinson this week for a residency on campus that included five classroom presentations, meetings with Treehouse residents and student-interns from the Center for Sustainability Education and Alliance for Aquatic Resource Monitoring (ALLARM), meals with students and faculty, and a public address in the Anita Tuvin Schlechter Auditorium.

Long outspoken on social-justice issues, Ruffalo began to work in environmentalism a decade ago, after moving with his family to upstate New York, a seat of the Marcellus Shale hydraulic fracturing (fracking) controversy. He’s since advocated widely for environmental issues, contributing works to The Guardian and Huffington Post, and has co-founded two nonprofits, Water Defense, which enables citizens to monitor local water supplies, and The Solutions Project, which shares science, business and culture that demonstrates the feasibility of renewable energy.

Ruffalo was named to Time magazine’s 2011 People Who Matter list and earned a Gandhi Giving Back award and a Bafta Humanitarian Award. He will donate the $100,000 Rose-Walters honorarium to his nonprofit organization Water Defense.

During his Rose-Walters Prize acceptance speech last spring, Ruffalo encouraged the students to “act up” and “buck the system.” He revisited that theme during his residency, most notably during Monday evening’s public address, a Q&A with John J. Curley '60 and Ann Conser Curley '63 Faculty Chair in the Liberal Arts Amy Farrell.

“When money and people intersect, morality can become cloudy, and we need to remind people of their humanity,” he told the crowd of approximately 800. “Where you see change needing to happen, act up. It’s fun. It’s enlivening. It creates community, and the alternative is an inner deadening. I say, go for life, always.”

Ruffalo also stressed the importance of partnering with those of like minds and complementary skills and asserted that when we fight for a cause we love, we are more likely to persevere and succeed. “Love makes the discomfort [of speaking out] bearable, and it’s what saves us from the toxicity of anger … when you have love on your side, you’re unbeatable.”

Ruffalo underscored those points during his classroom visits. Speaking with a science-writing class, he talked about how his nonprofits communicate scientific data effectively to decision makers. In a nature-writing course, he stressed the ways in which storytelling can effect change.

“He was able to defeat the fracking industry through a grassroots movement which relied heavily on telling the stories of people affected by fracking,” said Jeremy Slovin ’18 (environmental science, economics), a member of the latter class. “This made me reflect on the fact that the nature writing we are studying is necessary.”

Speaking in a theatre-arts class, Ruffalo discussed how artists can deepen national conversations and offered acting advice. Students in an environmental-policy class got the chance to present original research to Ruffalo and Scott Smith, chief scientist at Water Defense.

For Zev Greenberg ’16 (chemistry, biology & molecular biology) the lightbulb moment arrived when Ruffalo asserted that while celebrities can shine a spotlight on issues they care about, anyone with enough passion and perseverance can be a driver of change.

“I realized that Mark was like everyone else at Dickinson—he’s passionate, and when he didn’t have the means to independently make change, he sought out the help he needed to make his vision for improved water quality and monitoring a reality,” said Greenberg, who attended a dinner with Ruffalo along with fellow student leaders, faculty and administrators, and also introduced Ruffalo at the Monday-evening event.

“I realized that the people who are making a difference are not always those in red capes, or with bulging green muscles,” Greenberg added. “What it takes is a passionate group of people who care about an issue and want to see a resolution.”