Weiss Center for the Arts 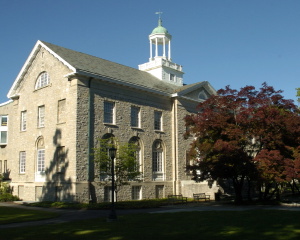 After the completion of the Kline Life/Sport Learning Center, Dickinson College’s Alumni Gymnasium underwent a two year, $3.4 million renovation in 1981 to become the Emil R. Weiss Center for the Arts. The renovated center, designed by Robert A. Spillman of Spillman Farmer architects, was dedicated on May 21, 1983. It was named in honor of Emil R. Weiss, Dickinson College class of 1953 and a member of the Board of Trustees, whose generous gift made the renovation possible. Major renovations included the addition of a second ceiling to the gymnasium area to create a fourth floor, as well as an addition to the south side of the building.

The Weiss Center houses the Departments of Music and Art & Art History, providing classroom and office space as well as practice rooms and art studios. The basement and first floor are home to the Howard Lane Rubendall Recital Hall (named in honor of the alumnus and former College president), and the Trout Art Gallery (a tribute to Brook and Mary Trout by their daughters Ruth, class of 1936, and Helen), which was dedicated on October 14, 1983.

Directions to the Weiss Center