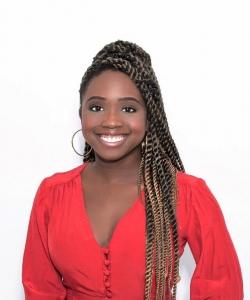 Cogan Alumni Fellowship - Spring 2021
Monday, February 22, 2021 - Cogan Virtual Talk - "Covering Race in the Age of Trump — and After"
Fabiola Cineas '12 - Fabiola Cineas is a staff writer at Vox where she covers race, politics and policy, and culture and is a host of Vox Media Studios Emmy-nominated YouTube series "Glad You Asked." Cineas was previously the senior editor at the Philadelphia magazine, where she led the publication's coverage of the city's innovation scene, from its startups and corporations to its jobs and leaders. Cineas regularly interviewed CEOs through her monthly live event series Secrets From the C-Suite. Before covering the local economy, she covered education in Philadelphia and in her hometown of New York City. And before launching her career in journalism, she taught seventh-graders in Camden, New Jersey through Teach for America. She is a graduate of the University of Pennsylvania and Dickinson College.

Spring 2020 - John Orlando ’96 - John Orlando is the Senior Vice President of live-action production at Universal 1440 Entertainment, responsible for long-term slate strategy and day-to-day development/production of the studio’s films. Mr. Orlando was formerly Head of Content at the digital video streaming network Sony Crackle, where he oversaw the full content cycle and the teams responsible for the development, production, and acquisitions of content. His successes include “The Oath,” “StartUp,” “SuperMansion,” and others. Mr. Orlando pushed Sony Crackle to produce the first studio based digital feature and subsequently oversaw a full slate of digital feature films. Before joining Sony, Mr. Orlando began his career at the William Morris Agency, WMA, where he worked in the feature and television literary departments. He then worked in features development at Wells Productions and United Artists and as a talent and literary manager at Circle of Confusion. In 2007, Mr. Orlando joined Contradiction Films, an independent producer/financier based in Canada to run production and development. Mr. Orlando lives in Los Angeles with his wife and two young daughters. He earned degrees in English and Environmental Studies from Dickinson College. You can view John's talk here on "The Evolution of Entertainment and the Practical English Education."

Spring 2019 - Rev. Dr. Annie Lockhart-Gilroy ’97
Rev. Dr. Annie Lockhart-Gilroy ’97 - Annie is a scholar in Christian education and practical theology at Phillips Theological Seminary with a focus on youth ministry and emancipatory pedagogy. She has taught students on many levels from middle school to doctoral students. She has worked with youth as a teacher, coach, youth minister, and Christian educator for almost two decades. She earned her PhD. in Christian Education and Congregational Studies from Garrett-Evangelical Theological Seminary and her M.Div. from Princeton Theological Seminary. Her teaching and research interests include: womanist approaches to working with Black girls, emancipatory pedagogy, faith and developmental theories, and ministry to, with, and for, youth and young adults. Here is Annie's 2019 Cogan lecture on "In Between the Lines and Outside the Canon: Learning from What They Don't Teach You."

Spring 2018 - Melissa B. Lareau ’03 is the Founder and CEO of Dirt Revolution.  Prior to Dirt Revolution, Melissa worked for fast moving and successful start ups such as Postmates in Business Development and Data Analytics.  With over a decade of combined experience in agriculture, food systems, food distribution and a Masters in Landscape History from UEA, Melissa and her company are uniquely poised to help solve major problems humanity is facing such as global warming, toxicity in our environments and food security. In her free time, Melissa volunteers as the Director of Development and Lead Organizer for San Francisco's annual Día de los Muertos celebration in the Mission and is a founding member of the New Orleans Food Co-op. Melissa discussed her life story and events such as Hurricane Katrina shaped her career path and life vision. You can view Melissa's 2018 Cogan Talk on "Decide: How the Unexpected in Life Affects Career, Choice and Vision."

Spring 2017 - Roger Brubaker ’03 is currently a Graduate Teaching Fellow at Oregon State University where he is completing a Master’s of Public Health in Epidemiology studying the traumatic effects of intimate partner violence.  Before that he counseled perpetrators of family violence in a Batterer’s Intervention Program.  Previous to finding his passion for violence prevention, Roger’s career path since Dickinson had been anything but linear.  Upon graduation, he worked as an arborist, taught Natural Resource Science in a vocational program for at-risk youth and served as a Peace Corps volunteer in Central Thailand working on Dengue fever prevention initiatives. Here is Roger's Cogan Talk from February 27, 2017.

Spring 2016 - Lindsey Officer '09 is the Brand Development Director at Marie Claire, specializes in the creative development, packaging, and communication of advertiser- and consumer-facing marketing initiatives. Prior to her role at Marie Claire, she was Senior Integrated Marketing Manager at Vogue, where she conceptualized and executed 360° marketing programs for the beauty, contemporary fashion, footwear, and liquor categories. Previously, she was Special Projects Manager at Harper's Bazaar, serving as the chief copywriter on staff and spearheading video production. She jump started her career at Hearst Corporation with a marketing internship at Cosmopolitan, landing at Bazaar shortly after graduating from Dickinson. Lindsey graduated Summa Cum Laude and Phi Beta Kappa with a BA in English and a minor in French.

Spring 2015 - Maggie Andrews '03 discusses her adventurous path to a fulfilling career. A 2003 graduate of Dickinson College, Maggie Andrews is currently the Director of Development for 826 National, a national network of creative writing and tutoring centers. With more than a decade of nonprofit administration experience, her work has taken her to Baltimore, Boston, and since 2009, the Bay Area. She has had the privilege of helping to cultivate and secure funding for a variety of youth-focused organizations including Teach For America, Stanford Jazz Workshop, and NPR's From the Top. Maggie has an MS in Arts Administration from Boston University, and served as part of the leadership team of genARTS Silicon Valley.

Spring 2014 - Chris Maier ’99 has worked as a writer of various shades for more than 15 years. He began his career as the staff writer for Dickinson Magazine and has since co-written nearly two dozen guidebooks for the Princeton Review, taught college-level composition and creative writing courses, co-founded a boutique design agency, and, most recently, signed on as a creative director at 50,000feet, a national creative agency. His publications include short stories, creative nonfiction, and journalism. He started the literary/arts magazine, Ninth Letter, and served as the founding editor of the online magazine Smile Politely. He holds a BA in English from Dickinson College and an MFA in fiction writing from the University of Illinois. Chris presented his talk on March 3 entitled "The Other Story: What Your Resume Won't Reveal."

Spring 2013 - Martha Mihalick '01 is an editor at Greenwillow Books, an imprint of HarperCollins Publishers. In more than a decade there, she has worked with many of the most acclaimed authors and artists in children's books. She acquires and edits books for children and teens of all ages, from picture books to young adult novels. Her books include the William C. Morris Award and Andre Norton Award finalist "The Girl of Fire" and "Thorns" by Rae Carson, as well as its sequel "The Crown of Embers," "Breathe" by Sarah Crossan," "Entwined" by Heather Dixon, "Masque of the Red Death" by Bethany Griffin; and the "Last Apprentice" series, among others. She was also the founding chair of the Children's Book Council's Early Career Committee shortly after entering the publishing industry. She speaks regularly across the country at conferences for the Society of Children's Book Writers and Illustrators. You can find her on twitter as @marthamihalick. Martha's talk was titled "Writing in the Margins: A Children's Book Editor in the Big City."

Spring 2012 - Carrie Scott Lazarus ’01 is currently curator and director of the SHOWstudio Shop in London. She has been working in the art world for almost a decade. Before starting her own company CS&P Art Advisory in 2009, where she develops Modern and Contemporary art collections as well as curates exhibitions worldwide. Scott was director of  the Nicole Klagbsrun Gallery in New York, and the James Harris Gallery in Seattle previously. In addition to her curatorial experience, Scott also is an arts writer with a Master's in art history. Her talk was titled “Not Just A Titular Hero: How an English department taught me to think.”

Spring 2010 - Frank James '79, who has had both a stellar career as a print journalist (The Wall Street Journal, Chicago Tribune) and a pioneering position in new media (as the co-founder of NPR's blog "The Two-Way")—is uniquely qualified to speak about the changes in media, American culture and the skills he learned as a Dickinson English major. He also is a member of the college's Board of Trustees. His talk was titled "There's A Place for Us: An English Major's Journey from Old to New Media."

Spring 2009 - Susan Stewart '73, well-known poet and cultural critic,is currently the Annan Professor of English at Princeton University. She gave the talk, "Learning to Write: A Discussion with Susan Stewart."

Spring 2008 - Christopher Kennedy '85, sports writer/editor for The Republican, Springfield, Mass. gave the talk, "Local Today, Pro Tomorrow" and Brock Clarke '90, associate professor of English, University of Cincinnati, and award-winning author gave the talk, "It's Better to Write About An Arsonist Than Be One, and Other Lessons I Learned at Dickinson."

Spring 2006 - Kerry Folan ’01, editor of Women in the Arts magazine. Talk: "Great Expectations or Bleak House: What Can You Expect Your First Five Years After Dickinson?" and Ron Simon ’73, curator of television at The Museum of Television & Radio. Talk: "From Shakespeare to The Simpsons: My Journey In Becoming a Television Curator."

Spring 2003 - Laura Seeff ’87, an epidemiologist at the Centers for Disease Control and John Balitis ’84, attorney with Fennemore Craig

Spring 2002 - Mara Nicastro '88, assistant headmaster at the Nora School and Byron Quann '61, president and CEO of the Whitaker Center for Science and the Arts.