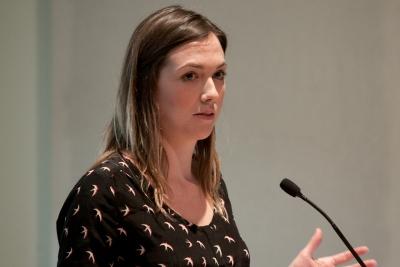 When Carrie Scott Lazarus ’01 finished her first semester at Dickinson with a less-than-stellar GPA, her First-Year Seminar professor, Tom Reed, sat her down for a conversation that would change the course of her life. “He told me that if I wasn’t going to try any harder, I shouldn’t waste his time,” Lazarus recalls.

Reed remembers the interaction as well, though he did not anticipate the impact it would have on her. “I certainly remember the conversation,” the professor of English says. “For all of the importance to me of having had something useful to say to a promising student, it seems to have been a bigger thing for her. I’m really glad it worked out the way it did.” By the time Reed taught Lazarus again, in her senior seminar, “she had found so much purpose and direction—she was really a leader, just through the force of her enthusiasm and energy.”

Eleven years after Lazarus’ graduation, following a decade of traveling and working in a variety of venues in the art world, Lazarus has settled in London to curate and direct the SHOWstudio Shop. On Feb. 26-27, the English department welcomed her back to campus as the Cogan Alumni Fellow to talk about her career path, her experiences living abroad and her engagement with London’s active art community.

The Cogan Alumni Fellowship is an annual event named in honor of Eleanor Cogan, a former Carlisle resident who audited more than 50 classes at Dickinson—32 of them in the English department—after her retirement as a research chemist. Each year, the English department invites to campus an alumna or alumnus who exemplifies the benefit and range of an English major; each Cogan Fellow offers a new answer to the question, “What can you do with an English major?” Recent fellows include NPR journalist Frank James ’79 and literary critic and poet Susan Stewart ’73. This year is the first fellowship since Cogan’s death in December at the age of 102.

The English department chose Lazarus this year in part because she has pursued a career overseas. “We liked her for the abroad aspect at first,” says Colin Tripp ’14, a member of the Cogan committee. “We got a lot of that interplay about being abroad [during her visit].”

Tripp was Lazarus’ campus liaison in the months leading up to her visit. When he first got in touch with her in early November, “she was right away really enthused,” he recalls.

Lazarus is also the first fellow who knew Cogan personally. “I was lucky enough to have Eleanor sit in on two of my classes while I was at Dickinson,” Lazarus recalls. “She was an inspiration. To now be part of her legacy is a profound honor.”

Lazarus spent two days on campus meeting with students and alumni. During the Cogan dinner in her honor on Sunday, she was the official judge of the dinner’s literary-dessert contest, granting first prize to “One Flew Over the Cookie’s Nest,” submitted by Kaitlin Lilienthal ’12. On Monday, Lazarus joined a group of English majors for lunch at local favorite Amy’s Thai and delivered her talk that evening in the Stern Center Great Room.

Not just a titular hero

In her talk, Not Just A Titular Hero: How an English Department Taught Me to Think, Lazarus recalled the suburban malaise and rebellion of her high-school years in Greenwich, Conn., and the accident that left her with a broken leg and a lot of time on her hands to find her life’s direction. “I’m telling you, [the accident] is what got me into this place,” she said. After spending months crafting her college-admissions essay about the epiphany that accompanied her broken leg, Lazarus was admitted to Dickinson and arrived in the fall of 1997.

Lazarus then projected her first-semester grades onto a screen behind her. She was met with a few giggles and some gasps. Once Professor Reed found that college-admissions essay and could see the kind of work she could accomplish when she set her mind to it, Lazarus explained, he knew she had unfulfilled potential. That’s when he sat her down for the fateful conversation that changed her attitude toward her studies.

Lazarus’ career path took her from an M.A. program in art history at the University of Washington in Seattle to the Nicole Klagsbrun Gallery in New York City before she founded her art-advisory company, Carrie Scott & Partners. Through her firm, she connected with fashion photographer Nick Knight and became director and curator of the SHOWstudio Shop. With Knight, Lazarus explores the relationship between fashion and fine art, tackling issues like race and gender along the way in innovative, interactive exhibits. Lazarus has worked with celebrities like Naomi Campbell, Kate Moss and Lady Gaga, as well as artists like Beth Campbell and Rashid Johnson.

“I’m not at all surprised to see how well she’s done for herself,” Reed says. “Finding her best self in both settings [at Dickinson and professionally] made for an inspiring narrative.”

For her part, Lazarus was pleasantly surprised by the changes Dickinson has undergone since she last set foot on campus 11 years ago. “It was wonderful to see how the college has changed over the years and nice to be able to recognize that the quality and strength of the professors sits at the core of that change.”

Lazarus wasn’t the only alumna on campus for the Cogan event. Megan Liberty ’11, who has just been admitted to University College London’s art history master’s program and currently works as a curatorial intern in Brooklyn, N.Y., returned to learn how a fellow art lover turned her passion into a successful career.

“Professors [Wendy] Moffat and [Carol Ann] Johnston both told me that Carrie would be the Cogan speaker a month or so before the talk,” Liberty explains. “They heavily encouraged me to attend. I was really excited about meeting Carrie because we have almost identical undergraduate backgrounds, and she has successfully achieved a career in the arts. It was really comforting and inspiring to see someone only 10 years away from where I am who had already accomplished so much. And there she was, encouraging me that I could—and would—also be able to succeed.”
Tripp agrees that Lazarus’ accomplishments in such a short time are encouraging, especially in difficult economic times: “It was comforting to hear what little idea she had of what she wanted to do [while at Dickinson], and now she’s doing such cool things.”