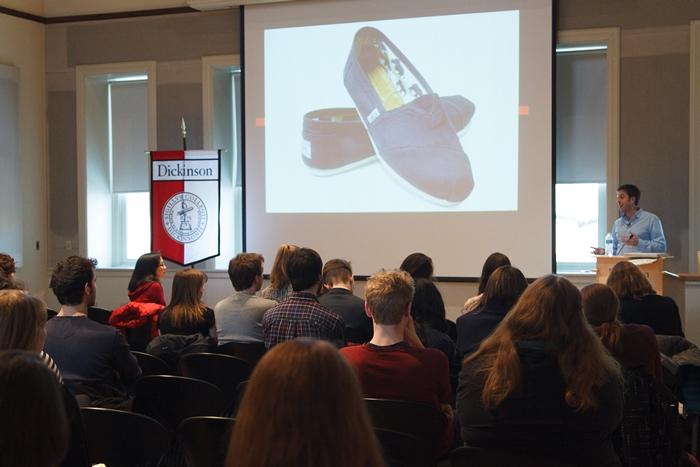 Here’s a story for you, courtesy of Chris Maier '99:

After he graduated from Dickinson, Maier traveled to the West Coast, a little aimless, and then he came back to Carlisle. “I started working in a health-food store. And I popped in to see Professor [of English Wendy] Moffat, and she sat me down and said, ‘What the hell are you doing?’ ” He laughs at this point. “Now that’s a mentor!”

But that little kick in the pants made Maier articulate, maybe for the first time, what he really wanted to do—write and tell stories—and he and Moffat put together a plan. Fifteen years later, the plan finds Maier as creative director with 50,000feet, a Washington, D.C., and Chicago-based agency specializing in branding strategies, and it finds him back on campus, this time as Dickinson’s newest Cogan Alumni Fellow.

At heart, and professionally, Maier has always been a writer, and he spent some time with students discussing how to tell a good story and why knowing how to do so is its own reward.

“My objective today is not to tell you all to go out and become professional storytellers, which you could,” Maier said, addressing a rapt audience in the Stern Center’s Great Room. “But it’s really to say that no matter what you do, you’re going to benefit from your ability to tell a better story, to engage people around that story and to communicate that story.”

Starting his career in a self-created staff writer position at Dickinson Magazine (where he often “got stuck writing the obituaries”), Maier told students that his storytelling seed was planted while he was still an undergraduate.

With one more look over the crowd, Maier passed on a kernel of his own, something everyone venturing beyond the limestone one day will appreciate, and something Maier himself has been living for 15 years.

“The cool part is that you can leave here and not just tell stories,” he said, “but you can actually make a living doing this.”

The Cogan Alumni Fellowship program is named in honor of Eleanor Cogan, a scientist, homemaker and mother who dedicated herself to lifelong learning and to the study of English literature. After taking 52 courses at Dickinson as a returning student, she was awarded an honorary doctor of letters from Dickinson at age 90 for her enduring scholarship. Each spring, the Department of English invites a graduate back to campus to share life and work experiences with current students as a Cogan Alumni Fellow.