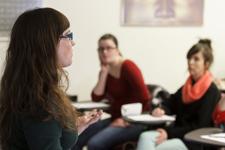 England in 1999 was an exciting place to be for a young bookworm like Martha Mihalick '01. After all, it's the land of Harry Potter, that fictional boy-wizard who sailed the wave of one of the most successful publishing ventures of all time. And Mihalick, who had a penchant for children's and young-adult literature, had the good fortune of being there just as the full force of Pottermania began to take hold.

"That's when I realized that it was possible to actually have a career editing children's books," said Mihalick, who spent her junior year as a study-abroad student in Norwich. When she returned to campus for her senior year, she wrote her senior thesis on the Harry Potter series and set out to find a job in the field.

Today, Mihalick is a children's-book editor at HarperCollins' Greenwillow Books, a job that allows her to indulge a lifelong passion while helping to build authorial works and careers, shaping library collections and curricula and sparking the minds and imaginations of a generation of young readers. This week she returned to Dickinson to meet with students in and out of the classroom and deliver a public talk about how she discovered the job of her dreams.

Mihalick is the 2013 Cogan Alumni Fellow, an honor bestowed on accomplished alumni who are invited to visit campus to discuss their experiences with students with similar interests. Past honorees include an art curator, a physician, journalists and editors for major news outlets, a celebrated poet, a sportswriter, a lawyer, leading educators, a child advocate, a state deputy-general counsel, the president of an arts center, a national-news anchor and directors of local and national nonprofits.

English majors Larissa Albright and Hailey Weiss, both of the class of 2015, were among the approximately 60 students who attended Mihalik's Monday-afternoon lecture in hopes of picking up some useful career tips. "I've been interested in reading and creative writing, and I wanted to see what some of my options might be," Albright said. "It's definitely inspirational to see a younger alumna who's made it in this field."

In her lecture, A Book Editor in the Big City, Mihalick told the students that she caught her first glimpse of her future career when she worked as a peer tutor at Dickinson's Writing Center, saying, "I realized how much I loved the puzzle of helping other people with their own writing." She went on to intern at a publishing house in the summer after her sophomore year and then traveled to England for a junior year at the University of Norwich. After graduating from Dickinson in 2001, she earned a publishing certificate at the Denver Publishing Institute and was hired by Greenwillow. And before long, she moved up the ranks.

Today, Mihalick acquires and edits books for children, teens and young adults; selects books for publication; and works closely with authors through every step of the editorial process. She also presents titles to librarians across the country a few times a year.

Mihalick told the students that while she knew that her experiences in literature classes and at the Writing Center would be helpful to her in her professional life, she didn't realize that she would tap what she'd learned in her liberal-arts courses, too. "I took an art course, and that gave me a basic vocabulary in art, which comes in very handy when editing picture books and talking with authors and artists," she explained. And, she said, when she was tasked with editing a children's book about the body's organs, the information she learned in her introductory-biology course saw her through.

That was good news to Alison Pogust '14, an English major who is considering a career in publishing. "It's nice to get confirmation that everything I'm learning in class right now can benefit me, and I like the idea of a job that would require me to keep learning about a lot of different things," she said. "It's good to see that she is clearly happy where she is, and she seems very passionate about what she is doing after 11 years in this field."

That passion, Mihalik stressed, is the critical element of her success.

"There are a lot of resources here to help you indulge your own interests, whatever they might be," said Mihalick, who helped launch a student literary magazine during her undergrad years. "It's a really valuable thing, to have a supportive community that encourages and supports you. You should be unafraid to embrace your passions, all of them, to the degree that they interest you. You just have to do what you love best."

Who Was Eleanor Cogan?

The Cogan Alumni Fellowship program was founded in 1990 in honor of Dr. Eleanor Clayton Cogan, a beloved member of the Dickinson community and an impassioned supporter of lifelong education.

In 1931, a time when few women pursued careers in the sciences, Cogan earned a B.S. in chemistry at the University of Illinois and launched a teaching and research career. And when it came time to retire, she and her husband moved to Carlisle, where they could enjoy the intellectual and cultural benefits of college-town life.

Cogan was 70 years old when she enrolled in her first Dickinson course. Twenty years later, she had audited 52 courses, 32 in the English department. She was awarded an honorary doctorate of the liberal arts at age 90 and died at age 102.