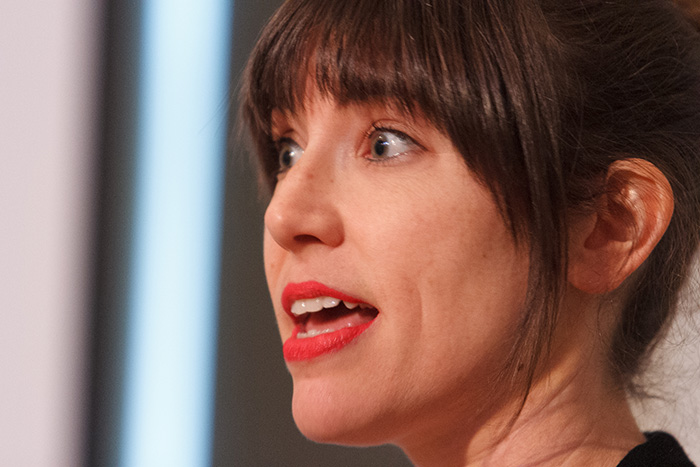 Passion was never the problem—Maggie Andrews ’03 had it in spades. But a clear path was harder to come by.

“I knew I wanted to work in social justice, and I knew I loved writing and art, but I had no idea how all of those interests could fit together in a career,” Andrews said, remembering the flurry of her senior year at Dickinson. “And I was OK with that. I gave myself permission and time to explore.”

The recipient of the 2015 Cogan Alumni Fellowship, Andrews returned to her alma mater to talk with students about her journey as an English major. During her recent stay, she visited classrooms, met informally with humanities majors and delivered a public address.

Andrews’ story begins with a move to Baltimore, just after graduation, where she roomed with a classmate who was pursuing a graduate degree at Johns Hopkins University. “Grad school was in the pipeline, but I didn’t know when, and I didn’t know what I wanted to do,” she recalled. So to pay the bills while she figured out next steps, she found a waitressing job at an Inner Harbor restaurant—just across the water, as it happens, from the Port Discovery Children’s Museum.

Andrews had enjoyed working with children during summers as a camp counselor, and the museum presented an opportunity to funnel that experience into meaningful work. So she signed up as a museum volunteer.

“It was so fun and rewarding that it didn’t feel like work,” she said, noting that just a few months later, she was offered a paid position, working with Port Discovery’s young visitors. That led to a position that also enabled her to participate in program development, which, in turn, provided a glimpse of the behind-the-scenes work that goes into running a nonprofit.

“That’s when it occurred to me that every museum, every afterschool program and every nonprofit had someone who ran it,” Andrews told students during her visit. “I knew that it was something I wanted to try. And I had an idea of how to get that experience.”

To that end, Andrews sought out an internship in the museum’s development office, tapping writing and communication skills she’d honed as an English major and student worker at Dickinson. And two years later, when she learned about a development opening at the Boston-based, NPR-produced From the Top—a radio program, hosted by Christopher O’Riley, about young musicians—she seized the opportunity.

The next few years were a blur of intensive learning, as Andrews transitioned from a being development associate to being director of annual giving for the NPR show and simultaneously pursued an M.S. in arts administration from Boston University. “I learned financial management, copyright law and everything that goes into managing an arts nonprofit or program, and I also had the opportunity to do a weeklong immersive course in Barcelona,” she said, recalling a development meeting with the head of the Picasso Museum (Museu Picasso). “It’s definitely not a bad way to travel the world.”

Andrews also found time to volunteer with 826 Boston, one of seven city-based tutoring and writing centers powered by 826 National, an organization devoted to providing inventive programming to under-resourced students across the nation. “I made it clear that if a job ever opened up [with 826], I was interested,” Andrews said. “My whole professional life has been all about planting seeds and watching them grow.”

One cross-country road trip later, Andrews relocated again—this time to the West Coast, where she worked in development leadership first for the Stanford Jazz Workshop and then for Teach for America. Five years after her move from Boston, she got that job offer from 826.

That was seven years ago, and Andrews has been living in San Francisco and working as 826 National’s director of development ever since. During her visit to Dickinson, Andrews met Janel Pineda ’18, who’d once participated in the very program she supports.

It’s that kind of interaction that feeds her on long or challenging days. “In fact, whenever I feel frustrated, I make sure to interact with the kids, and I remember why I do this,” Andrews said. “That’s why I still volunteer.”

Speaking with students about careers for humanities majors, Andrews encouraged them to seek out internships and service-learning experiences in areas where they are likely to thrive—in her case, a large city.

“That will put you in the type of environment where you will learn about work that might interest you, while introducing you to people who share your interests,” she told them. “If you’re passionate about something, you sometimes have to work in the trenches, but if you work for [organizations and causes] you believe in and stay open to the possibilities, you can throw your hat in the ring when the opportunities arise.”

Shireen Montgomery ’15, a double major in religion and sociology, was grateful for the advice. “It’s comforting to hear that you can hit the ground running—and climb the ladder—in different ways, as you develop a rhythm for your life,” she said.

Andrews’ philosophy also resonated with Julia Mercer ’18, who launched her own adventurous route during a gap year that included work in sustainable farming and nonprofits in Costa Rica, Zambia, England and Ireland. “There are so many things I’m interested in, so many things I want to do,” Mercer said with a laugh, “and it’s good to know that we have a lot of unofficial mentors here—people who have been there and can help you and tell you what worked for them.”