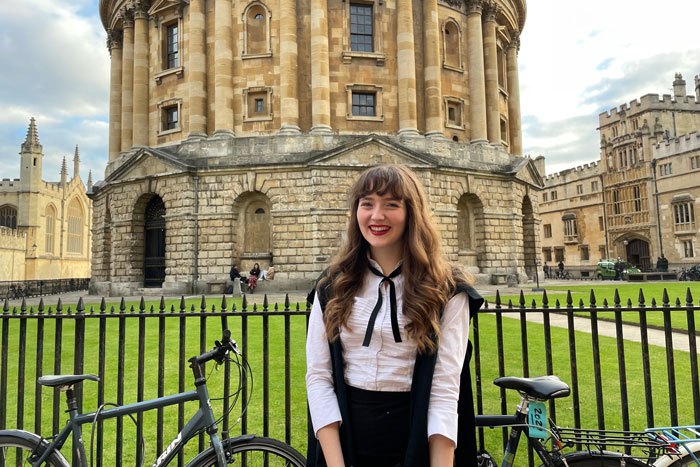 Since 1977, the award has recognized an elite group of future leaders

Established by Congress in 1975 as a living memorial to President Harry S. Truman, the Truman Scholarship supports the country’s next generation of public service leaders. And ever since the scholarship was first granted in 1977, this highly selective award has only been given to roughly 60 students each year.

This year, of 705 candidates nominated by 275 colleges and universities, 58 Truman Scholarships were awarded. And for the first time, a Dickinson student received one: Erin Lowe '23.

“This is a moment that I have been dreaming about since I was in high school,” says the philosophy and political science double-major, noting that the good news came in the form of a Zoom call from President John E. Jones III ’77, P’11; Amity Fox, Dickinson’s dean and director of internships and fellowships; and Amy McKiernan, assistant professor of philosophy. “It always seemed so daunting and impossible, but I applied because I knew that I wanted to pursue public service, and that this scholarship would make that a reality by helping to fund a graduate degree.”

According to the Truman Award website, the scholarship recognizes college juniors who “demonstrate outstanding leadership potential, a commitment to a career in government or the nonprofit sector and academic excellence.” And it provides funding for graduate school, leadership training, career counseling and internship and fellowship opportunities with the federal government.

“We are incredibly proud of Erin and her accomplishments," says Fox. "To be named a Truman Scholar is a true testament and recognition of Erin’s academic excellence and deep commitment to public service. I'm honored to have had the opportunity to support her in this process, and I cannot wait to see where her journey will lead.”

Lowe has a long history of public service work, starting in high school with participation in the YMCA's Youth and Government program, as well as Model U.N. and the Conference on National Affairs. In 2020 she worked as a field organizer for the Medicaid Expansion Campaign in Missouri, a campaign that helped make nearly 300,000 people eligible for health care coverage. She also took a year off from school at the onset of the COVID-19 pandemic to join AmeriCorps full-time at a food bank in Topeka, Kansas, followed by a stint as a volunteer civics instructor with the International Rescue Committee.

“[The Truman Scholarship] embodies much of my vision for the world and the change-making potential of our generation,” says Lowe, who looks to pursue a J.D./M.A. to prepare for a legal career focused on advocating for refugees and asylum-seekers. “I’m incredibly grateful to the many wonderful people who helped me throughout this process. Amity and Amy were constant sources of encouragement, along with my former supervisor and all the Dickinson professors who wrote recommendations and took the time to engage in mock interviews to aid my preparation."