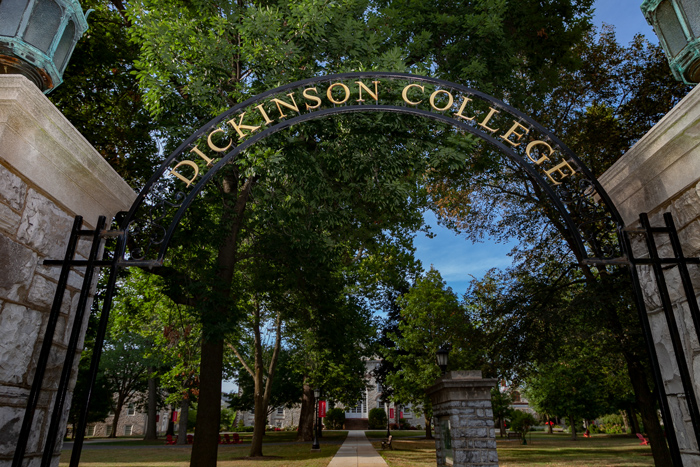 The distinctive Dickinson arch frames a view of Old West.

Major events at Dickinson will now begin with a carefully considered statement—one that acknowledges a difficult truth about our shared history and affirms the culture and sovereignty of those who were wronged. It’s called a Living Land Acknowledgement. And it’s endorsed by the United Nations, the U.S. Department of Arts and Culture, and Canada’s Truth and Reconciliation Commission as a means to formally recognize and honor Indigenous communities and work to mitigate past efforts to erase their cultures.

For Dickinson, this new, formal acknowledgement is a critical step in the college’s ongoing commitment to inclusion. And, as Assistant Professor of American Studies Darren Lone Fight notes, it’s also important for the Indigenous community and in the broader fight for social justice in America.

“Land acknowledgements are important because Indigenous peoples are important,” says Lone Fight, a scholar of Indigenous literature and an enrolled member of the Three Affiliated Tribes and Mvskoke Creek. “Our culture, history and peoplehood precede the formation of the United States, continue to brilliantly fluoresce in the present and extend indefinitely into our Indigenous future. These features both derive from and are reflected by the land. So land acknowledgements are a way of recognizing and honoring these important dimensions of Indigeneity wherever and whenever such an acknowledgement is given.”

Dickinson has developed a land acknowledgement in response to the outsized role that the college’s hometown plays in social-justice history as well as the college’s historic participation in those events.

Carlisle, Pennsylvania, is a Revolutionary-era town established on unceded Indigenous land. From 1879 to 1918, it also was home to the Carlisle Indian Industrial School (CIIS), a federally funded, off-reservation boarding school that aimed to assimilate Native American children by removing them from their homes and families—and their cultures. During the CIIS’ nearly 40 years of operation, 234 students died while enrolled there, compounding a legacy of suffering that continues to be felt in Indigenous communities and families.

Dickinson once shared ties with this federally funded institution on the north side of town. Some Dickinson professors taught at the CIIS. Two CIIS officials were conferred honorary degrees at Dickinson.

During the past decade, Dickinson hosted a national conference on the history of Carlisle and the CIIS and its lasting effects in the lives of the CIIS descendants. The college also established the Carlisle Indian School Digital Resource Center (CISDRC), which makes available a website and comprehensive searchable database of more than 300,000 related documents for descendants, historians and scholars and also provides teaching kits to educational institutions. And in 2020, the college created a tenure-track position in Native American studies.

Beginning last year, Dickinson took the college’s work in this area to the next level when it formed a working group to develop the land acknowledgement. It included Lone Fight, the lead writer; CIDRC codirectors Jim Gerencser, college archivist; and Susan Rose, Charles A. Dana Professor of Sociology and director of community studies and mosaics; Donna Bickford, director of the Women’s & Gender Resource Center; Espoir DelMain ’21; Greg Moyer, assistant vice president and director of admissions recruitment; and Cody Nielsen, director of the Center for Spirituality & Social Justice.

In a recent email to the campus community announcing the new land acknowledgement, interim President John E. Jones ’77, P’11, thanked the working group members and noted that the scholarship and social-justice work continues.

“I encourage all members of the Dickinson community to use this resource to educate yourselves, and to include a version of the Land Acknowledgment in your events,” Jones wrote. “This is an important step in acknowledging our complex past.”