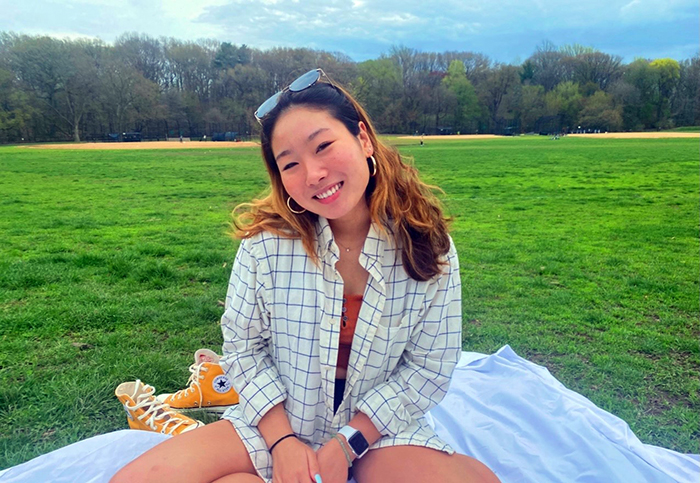 Himeno Yamane ’22’s parents were young when they immigrated to the U.S. from Japan and didn’t have an opportunity to attend college. Now, as a Dickinson first-generation college student, she’s learning about the language and culture of her parents’ homeland—and about her own heritage. Below, Himeno discusses what that means to her. She also reflects on her journey from a first-year student, unsure where she fit in on campus, to a rising senior and student-leader who knows what works best for her, and has found her “tribe.”

International business & management, with a double minor in economics and Japanese.

This Side of Paradise by F. Scott Fitzgerald.

Professor [of Earth Sciences and Moraine Chair in Arctic Studies] Ben Edwards has always been there for me during my time at Dickinson. Not only is he an amazing professor, but he is also a Posse mentor who supports, listens, advocates and goes above and beyond for us. Like many college students, I had a rough transition to college, coming from a large city to a small town. Everything was different. When I felt homesick as a first-year, Professor Edwards always made sure I was OK. During our weekly check-in meetings, he has always been there for me during my ups and downs. I have never met an individual who would put in so much work for his students, as I do not think I would have been at that place I am today without him.

I hope to work in New York City. I also plan to eventually travel to Japan and learn more about my own culture. I did not have many Japanese friends in New York to share the culture with, and before coming to Dickinson, I wanted to learn Japanese, as it was difficult to communicate with my family back in Japan. I started taking Japanese as a first-year, and although it has been very challenging, I find myself not only learning the language but also learning my own Japanese heritage.

Playing on the LPGA tours. Golf has always been a passion of mine, and I would see amazing women on television playing a sport that they loved. I wanted to be like them one day, but I recognized throughout the years that I have other passions as well.

Today, I play on the women’s golf team as a hobby, and I have had such an incredible experience with my teammates. Being out on our home course, the Barracks, is something that I always look forward to during the week, as it allows me to give myself a break from school.

I am a sales and analytics intern at Bloomberg in New York City. I’m working with Bloomberg’s terminal and its responsibilities. Bloomberg’s main mission is to deliver data, news and analytics through innovation quickly and accurately to 325,000 subscribers globally. I’m excited to be introduced to their culture and business and create new professional connection.

Being a first-generation college student. My parents immigrated from Japan when they were incredibly young and did not attend college. With this, I was incredibly late to the college application process, as I did not know what the SATs were until junior year of high school. Students around me were going to tutoring sessions, after-school SAT programs and so forth. It was embarrassing to talk about college, as I had no idea what I was doing. I did not have a mentor to navigate me through the process, but here I am at Dickinson today, chasing my degree with the help of the Posse Foundation. I will never forget the smile that my parents had at the Posse Ceremony. They were proud of me for trying my best to become the very best. I hope to continue and create more accomplishments throughout my life, but for now, my biggest accomplishment and focus is to be in college, receiving an education.

You are the only person who knows what works best for you. A great example of this would be my sleep schedule. I would see my friends sleep very late, studying for their exams that they had the next day at the library, but I like to study during my free time and sleep early. After I tried holding all-nighters before my exam, I noticed that it was an awful idea, as I messed up my sleeping schedule for the next month. You know what is best for you, and if it works, it works.

Finding out what I liked and did not like. I joined clubs and I left clubs, and eventually, I was able to find the groups that I was passionate about: Women of Color Summit, Hypnotic and the AAAC. I think this is very similar to my experience with certain classes. During my time at Dickinson, I found out what I am interested in and what I was good at as well as what I am not interested in and what I was bad at. I failed and succeeded, but it has been amazing to get to learn more about myself.