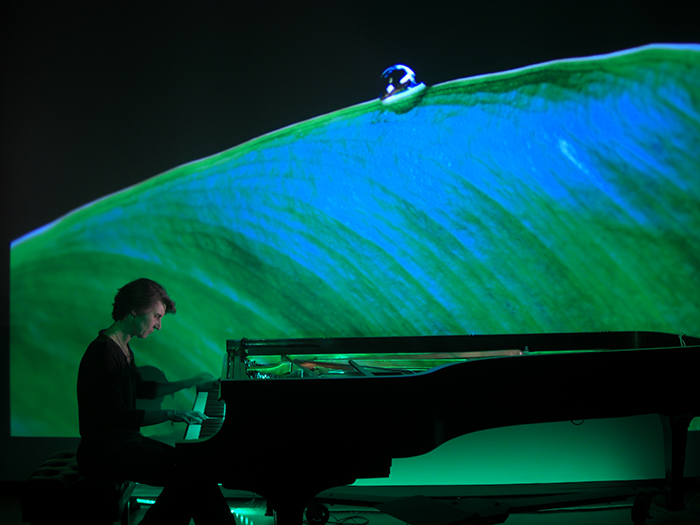 Fall 2019 is an exciting time at Dickinson, with two major interarts events on tap and a lineup of visiting artists who bring an array of perspectives to the mix.

The interarts productions begin in September with a Trout Gallery exhibition of large-scale photographs examining water conservation and two complementary performances by Professor of Music Jennifer Blyth and Associate Professor of Art Todd Arsenault '99 on intersecting themes. Inspired by the exhibition of works by photographer Edward Burtynsky, Blyth, and Arsenault will premiere Current, a new musical and artistic production, and also will partner with Assistant Professor of Music James Martin and Heare Ensemble in a concert setting Arsenault's video work to compositions by Ravel, Cowell, Crumb, Copland and Rzweski. (Interested in further exploring sustainability themes through art? Be sure to also check out the Dickinson College Choir's November concert, funded by the Center for Sustainability Education, with faculty guitarist James Hontz.)

The second major interarts event, Art Works, comes to campus in November. Choreographers Sarah Skaggs, director of dance; Erin Crawley-Woods, visiting instructor in dance; and guest-artist Christopher Williams collaborate with the visual arts, music, creative writing and theatre departments to explore the nature of art and art-making, asking questions such as, “What is the ‘work’ of art?” and “What are the various ways that art does its work?”

Global artistic traditions are considered in two Trout Gallery exhibitions. An October exhibition of statuettes, made for use in Buddhist practice, from Burma, China, Japan, Java, Korea and Thailand, was curated by Bizz Fretty ’20, working in conjunction with faculty members in the departments of East Asian studies and religion. In November, the Trout Gallery opens Abstract Traditions: Postwar Japanese Prints From the Depauw University Permanent Art Collection, illuminating developments in Japanese printmaking during the second half of the 20th century.

Music of the world is highlighted in October by Reverón, a salsa/merengue ensemble that visits Dickinson to present masterclasses, workshops and a public performance; and by the Faculty Winds Ensemble, which performs works from around the globe. The following month, the Dickinson College Orchestra will perform works by Mozart and his contemporary, Joseph Boulogne de St. Georges, the first African-European composer. Also in November, James Martin meditates on issues closer to home in a concert dedicated to American voices of resistance against civil and racial injustice.

Gender perspectives take center stage during a Mermaid Players' production of We Are Pussy Riot (or Everything is P.R.),  highlighting the true story of a Russian feminist art collective that was imprisoned after performing a 48-second punk protest song. Toward the other end of the gender spectrum, issues related to masculinity are explored by two contemporary authors: Thomas Page McBee, a transgender man, and Carlos Andrés Gómez, a Colombian American poet and actor.

Check out the full Fall 2019 Calendar of Arts.