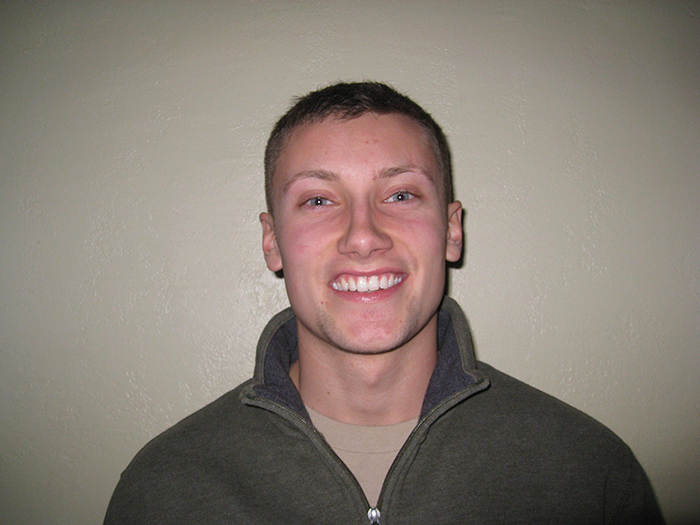 It was a sense of injustice that spurred Pentti Hanlon ’19 to dig deeper into big life questions, and the chance to dive into a major that “has room for emotion and reason” inspired him to declare a philosophy major. During his time at Dickinson, he’s studied abroad in India, led Outing Club excursions and researched Buddhism and water harvesting technology.

Philosophy, with an earth sciences minor.

One Hundred Years of Solitude by Gabriel García Márquez.

Beasts of the Southern Wild.

After being accepted, I took a road trip with my family to see Dickinson in person. While touring the campus, a student offered to show my family and I around. We were impressed that a college student, without being asked to do so, was willing to show a prospective student around. That was a good indicator to us that there are students at Dickinson who take initiative and are proud of where they go to school.

There’s a tree on the academic quad that’s good for sitting under. It’s near the flag pole; you’ll know it when you see it!

I took an intro-level philosophy class taught by [Associate Professor of Philosophy] Chauncey Maher during my first year. Professor Maher showed the class a video of the 1992 Los Angeles riots set to a soundtrack of Ice Cube’s “Tear this Mother Up.” If you don’t know, the rioting in L.A. was a response to the acquittal of four police officers who brutalized Rodney King; the video shown in class began with footage of King being beat down. As a class, we were already thinking about instances when rage is warranted and useful. A discipline that has (or should have) room for both emotion and reason? Sign me up.

I spent a semester living with a family in northwestern India. Jai Hind!

I was asked the same question while shopping at a corner store in Carlisle. The owner, Natasha, wasn’t satisfied with my “I don’t know” answer. Since she knows I’m studying philosophy, Natasha suggested that I answer with “I’m thinking about it” instead of “I don’t know.” So, I’m still thinking about what I’m going to do after graduation. If you find yourself at the intersection of North West and West North streets in Carlisle, you should stop by Natasha’s store. She sells African beauty products, some select foods in bulk and everyday household items.

[Professor of Philosophy] Susan Feldman has been described by other philosophy professors as the “smartest person in the department.” Professor Feldman has a rice pudding recipe that’s hard to beat, and she might share it with you, if you ask nicely.

I’d love to have another meal at my grandma’s dinner table. I should have asked her for more stories. You should listen when your grandmother talks!

During my first and second years at Dickinson, I led a couple of backpacking trips through the Outing Club. Both trips, one to North Carolina and the other to upstate New York, came with their own challenges. Being responsible for a group of people is scary, and I was relieved that everyone walked away happy and injury-free.

In fall 2017 I did an independent study project on a water harvesting technology native to the Thar Desert in India. I decided to take on the project since the technology involved has bearing on water security, an interest of mine. The project revealed that the use of the technology is declining for several reasons. Among them are changes in faith and land use as well as the introduction of other methods for getting water. More work needs to be done concerning the sustainability of those other methods.

During summer 2018 I worked as a research assistant under [Professor of Religion] Dan Cozort. As a research assistant, I reviewed sources in preparation for the pending publication of a book on Buddhism and the environment. Sources of interest showed how ideas that appear in Buddhism (dependent-arising, nonharm and meditation) can be used to guide our reaction to the environmental crisis we now find ourselves in.

My folks, of course. If I know how to love other people at all, it’s because they modeled a loving relationship for me. It’s funny that way: I feel like I had the privilege of growing up simultaneously watching and being the project that a couple undertook together.

Yikes. If you want the equipment to think about questions like this, check out Dickinson’s philosophy department.

I’ve been taught more personal lessons than great big truths. I need to listen more, which means tabling that reflexive white-guy defensiveness and not being so eager to show off what I think I know.