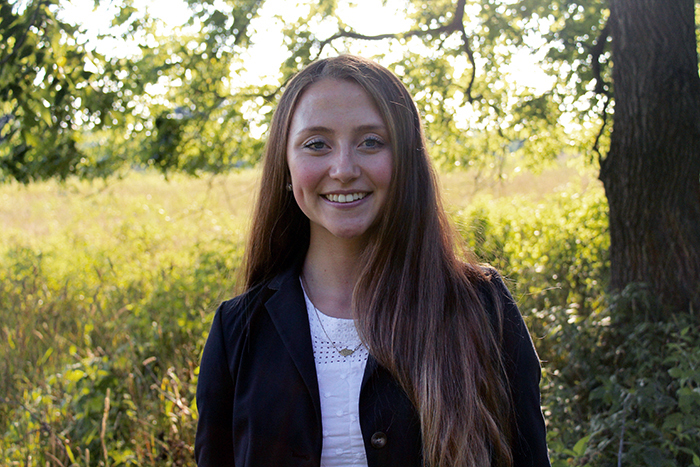 “Opportunities for research, suggestions from professors and trips to conferences abound, but you have to step up and take them," says Grace Ingle ’20, a Middle East studies major who’s pursuing a security studies certificate and a minor in Arabic. Ingle interned with the United Nations Association of Rochester, teaching English as a Second Language and citizenship classes to immigrants and refugees in her hometown. She also studied abroad twice in Moscow, Russia, and served an internship at the U.S. Army War College.

Middle East studies and Russian, with a certificate in security studies and minor in Arabic.

From childhood: The Phantom Tollbooth by Norton Juster. For inspiration: The Alchemist by Paulo Coelho. As a source of academic interest: The Looming Tower by Lawrence Wright.

The Pink Panther. I reference it as if it’s a cinematic masterpiece, and I’ve watched it more times than I care to admit.

When I started at Dickinson, I was sure that I would be an international studies major with a concentration on the Middle East. I realized that Middle East studies offered the specificity I wanted, and the security studies certificate was the perfect pairing. The curriculum flexibility in both programs has allowed me to study two languages, which was important to me. The two semesters of Middle East history I took with Professor [of History] David Commins this past year opened up new academic interests and confirmed I’d made the right choice. I declared a Russian major after studying abroad.

Weiss Center for the Arts. It’s home to The Trout Gallery, where I work. It’s also home to the piano practice rooms, which are a quiet sanctuary on campus.

Arabic classes. Since my first year, I have studied with a small group of classmates. [Lecturer in Middle East Studies] Mohammed Abu Shuleh and [Senior Lecturer in Middle East Studies] Magda Siekert are our mentors and advocates. We laugh at ourselves, we have fun and we struggle through grammar together. We watch great films, we have great discussions and sometimes there’s baklava. Given that the classes meet five days per week, the Arabic program is an essential part of my time at Dickinson.

I studied in Moscow, Russia, through the Summer Immersion Program, and I returned there for the fall 2018 semester. I started studying Russian sophomore year, and I never would have taken the leap for the semester program without encouragement from [Associate Professor of Russian] Alyssa DeBlasio. I’ve met up with local students who I Skyped with while in class at Dickinson, and my language proficiency has dramatically improved. These programs offer us so many opportunities, and our on-site director, Irina, is an amazing resource.

I took piano lessons for seven years as a kid. This past spring, I took a semester of private lessons to fulfill part of my art credit, which was a fun challenge. I have studied four foreign languages. Studying Spanish and French in high school is what inspired my current studies.

Last summer I interned with the United Nations Association of Rochester. I taught English as a Second Language and citizenship classes to immigrants and refugees in my hometown. The people I worked with taught me a lot about the value of patience, gratitude and perseverance. This spring I was a research intern at The United States Army War College.

Advocate for yourself. Opportunities for research, suggestions from professors and trips to conferences abound, but you have to step up and take them. These experiences have been the highlights of my semesters, and they’ve shaped my trajectory as a student and person.