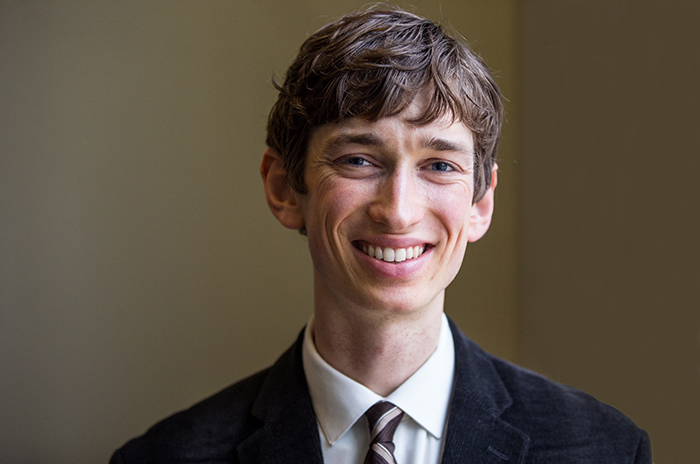 Alexander Kasznel ’15 isn’t one to eschew a good challenge. It was true during his junior year, when he crossed an ocean to present at a professional conference, and also the following fall, when he decided to pursue a career in engineering, just a few months shy of earning a chemistry degree.

Today, Kasznel is a Ph.D. bioengineering candidate at the University of Pennsylvania. He recently came back to campus to share his experiences with students.

A Writing Center tutor and Dean’s List student at Dickinson, Kasznel played trombone in the Jazz Band, Orchestra and DICE, joined Alpha Lambda Delta and earned several grants, scholarships and awards. In 2012, he served as writing assistant for a First-Year Seminar led by Associate Professor of Earth Sciences Peter Sak and went on to collaborate with Sak on a geochemistry student-faculty research project, testing soil along the Appalachian Trail, coauthoring a paper on the findings. Kasznel also took part in an undergraduate summer-research fellowship program at Drexel University, studying a biological process that allows DNA to be converted into protein, and worked on an independent research project on DNA crosslinking while studying abroad for a semester at the University of East Anglia, England.

As a study-abroad student, and with help from a Kenderdine grant, Kasznel traveled from England to Texas to present on his Drexel University work at the American Chemical Society conference. He’d been considering several career options—private industry, pharmacy, law—but after meeting a biochemical engineer at the conference, he found a new career path.

Kasznel had already settled on his fall course schedule at Dickinson when this epiphany arrived. Rather than make a late-game switch to Dickinson’s 3-2 engineering program, he sought advice from his professors and crafted grad-school application essays highlighting his diverse research experiences. He entered the University of Pennsylvania’s master’s program in 2015, switching to the doctoral bioengineering track last July.

As part of a Penn research team that’s synthesizing and characterizing collagen-model peptides, Kasznel admits he’s had to quickly ramp up on specialized software programs that colleagues with B.S. degrees in engineering already knew. “The flip side is when you’re working in a group, there are people from electrical engineering backgrounds who didn’t know about cell biology,” he adds. “Everyone brings something different to the table.”

For Kasznel, that includes razor-sharp writing skills—essential for scientific reports, abstracts, papers and grant proposals—and the intellectual courage he finds in his liberal-arts background.

“When you go to a place like Dickinson, you’re forced to go into a lot of classes that are not necessarily in your playing field, so it’s not an unfamiliar experience to take on something new,” he explains. “As a chemistry major taking a history class, you might think you will never need to know about the Peloponnesian War, and that might be technically true, but the experience of learning about a subject you know nothing about will be extremely helpful.”

It’s an inspiring message for Hannah Hartman ’18 (biochemistry & molecular biology), who attended Kasznel’s Feb. 3 career chat. “When you come here, you don’t know where your Dickinson education might take you,” she says. “It’s helpful to be able to connect with someone who was in your shoes, not long ago.”