Rising to the Musical Challenge 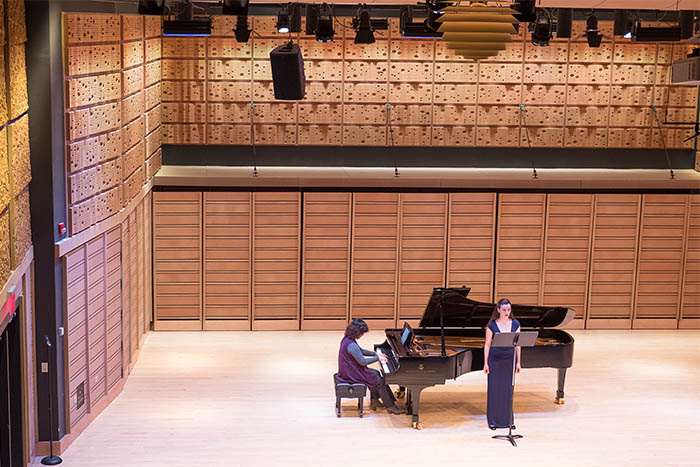 Four students took to the stage to compete in the annual concerto competition Dec. 6, each giving their all in hopes of winning the chance to perform as a soloist alongside the Dickinson College Orchestra at its spring concert.

Although the competition has been an annual feature of the music department since Professor of Music Robert Pound revived it in 1999, this was only the second year it was open to an audience. Auditions were previously held in a closed room in front of Pound and a panel of three judges made up of professionals selected from the community.

“It’s a significant performance, and sometimes students are playing at their very best, so we all felt that it should be witnessed,” says Pound of the change. “I think the ability of our players has come to the point where they welcome that challenge.”

And the performers rose to that challenge. Cailin Smith ’18 (soprano), Sara Tillett ’17 (soprano), Isaac Ward ’18 (viola) and Anna Ferry ’19 (violin) performed a difficult program that consisted of works by Wolfgang Amadeus Mozart, Laci Boldemann, Paul Hindemith and Antonin Dvorâk. And even though the performance was a competition, the students were enthusiastic about just being able to perform.

“My goal was to perform as best I could and showcase something I am personally proud to present,” says Smith, who performed Mozart’s “Voi avete un cor fedele.”

Once the performance concluded, judges deliberated for 20 minutes before Pound announced Tillett as the winner of the competition. She performed Boldemann’s 4 Epitaphs, Op. 10, which she will perform again with the college orchestra on April 30.

“Sara is exemplary as a student and a young performer,” says Pound. “I am very pleased with and proud of this year’s competition. There were four very strong performances, and I think the judges had a hard time deciding.”

Tillett  looks forward to the new experience of learning to sing while accompanied by an orchestra rather than a piano. “My studies in the music department are aimed at singing opera professionally, and performing with the Dickinson College Orchestra will help me grow as an artist and move me toward this goal,” she says.

Also this fall, seven Dickinson voice students competed in the National Association of Teachers of Singing competition, and five came away from the Oct. 29 competition with awards. Smith, Chelsea Mia Pierre ’18, Fiona Farrell ’18 and Sarah Benamati ’18 were all semifinalists in their category, and Tillett was awarded first place in her category.

Listen to the performances