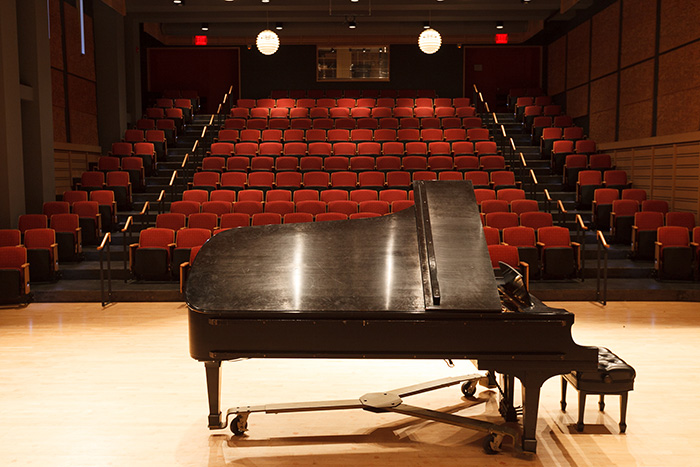 Competition was fierce during the annual student concerto competition, as student-musicians vied for a chance to take the spotlight during the high-profile, end-of-year orchestral concert. For 15 years, it was a closed-door process, as student competitors auditioned, one by one, before a panel of three judges. But this year, everyone was invited to listen in.

Staged Dec. 1 in the Rubendall Recital Hall, the first public student concerto competition brought seven student-musicians head to head before a live audience for the very first time. “We are all very excited about this, as we believe the musical abilities of our students overall are strong, and we have a great variety this year,” said Professor of Music Robert Pound, who has led the competition since its founding in 1999.

“The opportunity to play with a full orchestra is huge for any musician, so being able to do this now, in college, will give me valuable ensemble and solo performance experience at the same time,” said Bates, who has been playing trumpet since sixth grade but did not study it formally before beginning lessons with Contributing Faculty in Music Jeffrey Wohlbach last year.

Tillett, a fellow music major, also earned accolades this month. Three weeks before the concerto competition and just one week before her junior recital, Tillett won top honors in her category at the 2015 Allegheny Mountain Chapter (AMC) National Association of Teachers of Singing (NATS) Auditions, and she and her accompanist, music faculty member Eun Ae Baik-Kim, performed during the winners’ concert.  First-year student Julia Smouse earned semi-finalist honors during the event.

This marks the second year in a row that Tillett, who studies with Visiting Instructor in Music/Voice Jonathan Hays, has won in her category at the rigorous regional competition. "Because of student achievers like Sara, and because other students are hungry for a larger pool of competitors, I am considering taking students to compete in future auditions sponsored by the Eastern Region of NATS, which includes institutions from Delaware, New Jersey, New York, Pennsylvania, Quebec and West Virginia," Hays said.

Ultimately, all of these achievements are wins for the group, said Bates, who was heartened by the collaborative spirit she witnessed among competitors during her first music competition at Dickinson.

“It was amazing and humbling to compete against six music peers who are also friends. … We were all so supportive of one another,” she said. “I consider this a defining example of the camaraderie paired with extraordinary talent of the student musicians here at Dickinson. It gives me one more reason to love the music department.”