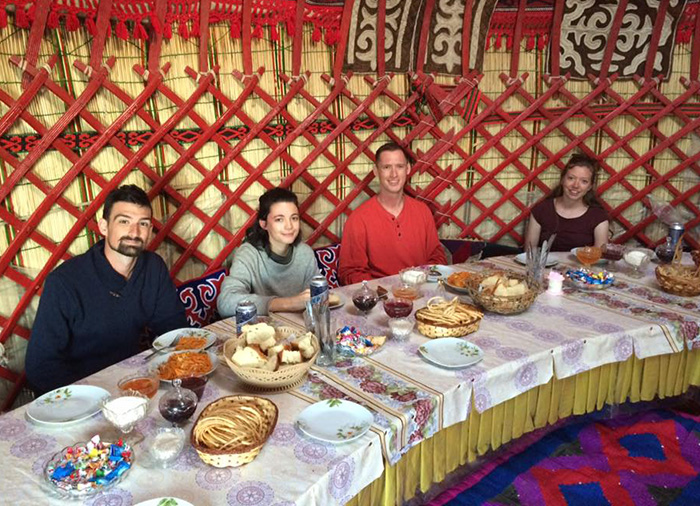 Austen Dowell '17, with some of the scholars who worked with him as he conducted research as a study-abroad student.

Before he boarded a plane for Russia and Central Asia, Austen Dowell ’17 accepted a parting gift from his mother—a classic collection of writings by Russia’s Anton Chekhov, set on that country’s largest island. “She said, ‘Maybe you can visit there while you’re overseas,' ” Dowell recalled with a smile. “Little did we know!”

A year later, Dowell is back on U.S. soil after conducting three research projects and attending two international conferences—including one on that very Russian island. He is one of two students who conducted original research while studying abroad last semester, with help from Dickinson’s Student International Research Fund (SIRF), a small-grant program that helps students dig deeper into their host cultures by conducting original research abroad. 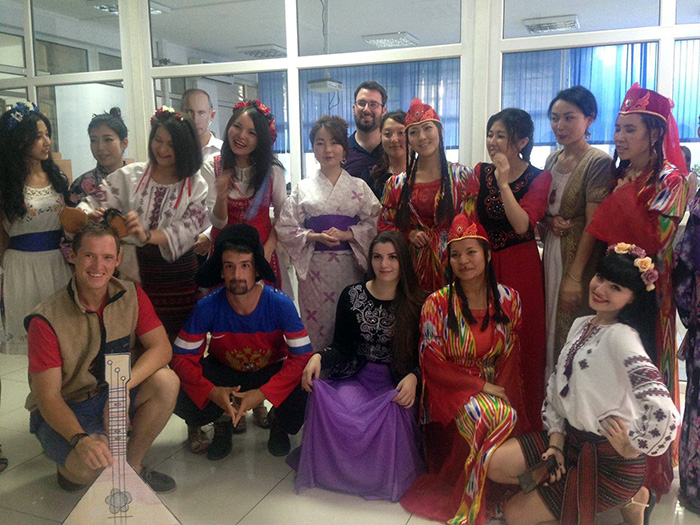 Austen Dowell '17 (first row, second from left) spent two semesters in Russia and one in Kyrgyzstan.

A double major in Russian and international studies with an eye toward a State Department career, Dowell studied abroad for two semesters in Russia, which included an internship with Moscow’s PIR Center and a semester in Kyrgyzstan. His research projects were supported by Dickinson's SIRF and by the Geldrich/Leffman Fund, another Dickinson award that focuses on foreign-language majors with a passion for literature.

While studying at Russian State University for the Humanities through the Dickinson-in-Moscow program, Dowell became fascinated with “Swan Song,” a story by Anton Chekhov, one of Russia’s foremost literary and cultural figures. After writing a paper comparing that classic with Shakespeare’s “King Lear” and outlining Chekhov’s significance in Russian culture, literature and identity, Dowell traveled to Crimea to participate in an international academic conference on Russian literature along with approximately 40 presenters.

Soon after, one of Dowell’s Russian professors invited him to take part in a second academic conference—this one on the North Pacific island of Sakhalin, the setting of the book he’d received from his mother. It’s a collection of travel writings by Chekhov, who visited the island’s penal colony in 1890. Dowell joined Chekhov scholars as they traced the acclaimed author’s steps around the island, and he interviewed several Chekhov and Russian-history experts as he researched historical narratives of Chekhov’s travels and his legacy in Sakhalin. Through this work, he explored shifts in the ways the author has been regarded by Russian and Soviet society.

Dowell took on two more research projects—a study of issues surrounding Central Asians who immigrated to Russia for better educational and professional opportunities, and an analysis of the changing landscape of national identity and history education in Kyrgyzstan after the fall of the Soviet Union. That final research project, conducted during his semester in Kyrgyzstan, led him to interview four Kyrgyz teachers and administrators about the teaching of Kyrgyz history and culture, specifically the changes ushered in after the fall of the Soviet Union in 1991.

“It was a fascinating experience,” said Dowell, who published an article about his research in the journal of the School of Russian and Asian Studies (Vestnik, Russia). “Soviet legacy is incredibly complex.” 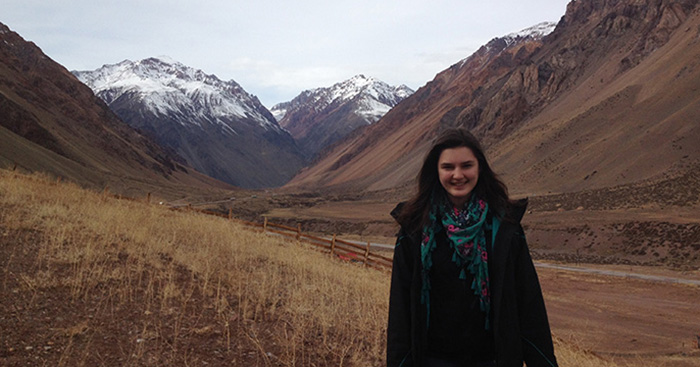 Stephanie Mazur ’17 studied in Ecuador and Argentina through the Dickinson-in-South-America program.

Stephanie Mazur ’17 tapped her Spanish-language skills and both of her majors—international studies and anthropology—when she conducted ethnographic research as part of her Dickinson-in-South-America experience. Like all Dickinson students who participate in that program, she began her studies in Cuenca, Ecuador, and then enrolled at the Universidad Nacional de Cuyo in Mendoza, Argentina.

Inspired by a geography class at the Argentinian university, Mazur traveled with classmates to migrant communities in Mendoza to further research the history of immigration in Argentina. Speaking exclusively in Spanish, she interviewed fellow students and their families about their experiences as immigrants, including why they had chosen to immigrate to Mendoza. “Through this experience, I gained personal connections, learned about cross cultural immigration and immigration law, and gained knowledge of regional issues,” said Mazur, who will include information about her work in her anthropology thesis.

Mazur and Dowell are among a growing number of Dickinson students who are tapping the college's SIRF program to make the most of their study-abroad experiences through original research. Last year’s recipients compared male students’ views of masculinity in the U.S. and in Denmark, explored German identity through German literature, examined graffiti-as-youth-identity in Peru, and surveyed attitudes toward women’s health issues in Cameroon. Other recent SIRF scholars studied coastal erosion (England), migration (Mexico), AIDS (France) and cultural integration (Spain).

The student researchers are encouraged to build on their projects after they return to Dickinson by incorporating what they’ve learned into a senior project or thesis. They also are required to present their work publicly on their return to campus so that others in the Dickinson community may learn from their experiences.

During the Nov. 16 Fall International Research Symposium, which also included a presentation by students who traveled to Israel and Palestine as part of a Mosaic on conflict resolution, Mazur reflected on the personal benefits of investigating a foreign culture through on-the-ground, original research. “I used this experience to really engage with Argentina in deeper ways than I would have otherwise,” she said. “It’s part of what I love about the liberal-arts experience.”