A Suitcase of Data 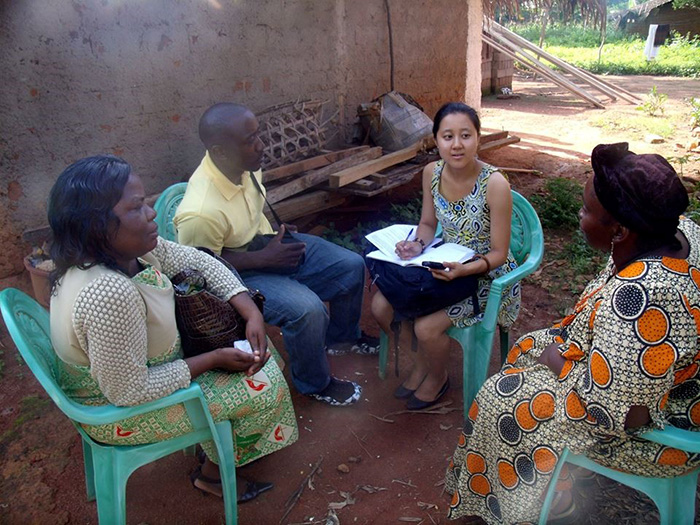 To relive and share what they’ve learned while abroad, study-abroad students bring back photos, mementoes and stories. Some also bring back hard data to back up what they learned.

These are the students who conduct original research while studying abroad, often with aid from scholarships. And when they return to campus, many continue their work, folding raw data they gathered into senior thesis projects.

While studying abroad in Cameroon last year, Park conducted two research projects on family planning and contraception. First, she interviewed a mix of urban and rural women around these issues; then, she interviewed women in a rural village where approximately 60 percent of the population is polygamous.

Park reports that the majority of women in polygamous marriages—nine out of 14—had never used any modern contraceptive method and that many of them associated contraceptives with side effects that would harm their bodies. Most also expressed a preference for monogamy, citing problems, such as land conflict, jealousy and tension, that polygamy can create.

“Through this research, I was able to apply experience, knowledge and skills I gained at Dickinson in Cameroon while deepening my connection with Cameroonian culture and people,” says Park, who plans to work with public health organizations and pursue a master’s degree in that field. “I also learned the critical importance of adaptability, flexibility and patience and the need to respect the limits imposed by different cultural norms.”

Simon Ciccarillo ’16 spent his junior year at the Russian State University for the Humanities, conducting research that combined his passion for Latin American social history with what he’s learned as a double major in international studies and Russian. Using Russian textbooks, primary resources, Internet data-mining and personal interviews, he researched Latin American-Russian diplomacy during the past 200 years and the ways in which the ebb and flow of the Latin American population in Moscow reflected and influenced those diplomatic exchanges.

After returning to Carlisle last fall, Ciccarillo wrote a senior thesis for his international studies major about how Russia is making inroads into Latin America and what this means for U.S. policy and standing in Latin America. For his Russian senior thesis, he is investigating why Russia is motivated to make those inroads.

“I believe we are in the middle of a changing political and foreign policy environment that will not be the same as what we have been used to historically, specifically in relation to Russia and Latin America,” he says. “Being able to cope with these changes is something we have not considered or been able to do, so I hope work like mine can be used to create some sort of perspective on the changing international system.”