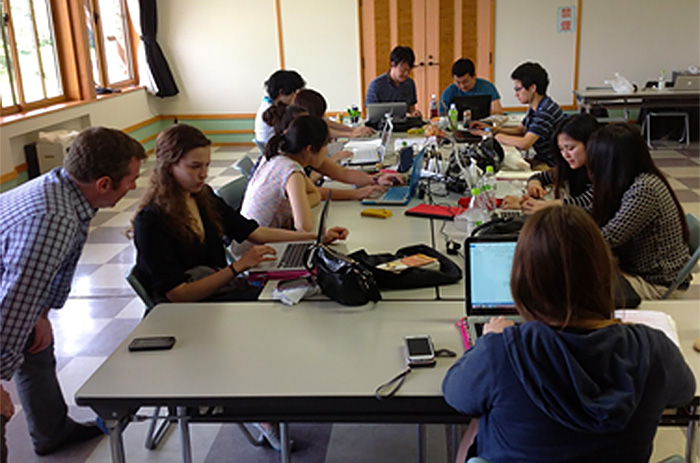 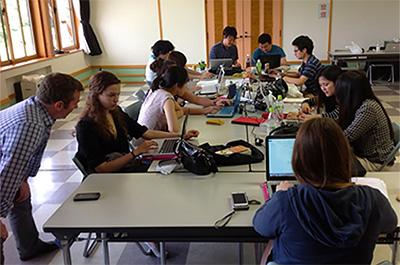 There’s a rising percentage of older citizens in many parts of the world, and policymakers and caregivers need to know how best to meet growing health care needs. How do seniors perceive quality of life, and what roles do cultures and caregiving systems play in their assessments? An international team of student-researchers examined the issue closely with a multicultural eye last summer when they enrolled in the Global Scholars U.S.-Japan program.

Spearheaded by Akita International University (AIU) in partnership with Dickinson faculty and with funding from the Japanese government, the program brought five Dickinson students and five AIU undergraduates together for cross-cultural research on senior citizens’ mental and psychological health as well as access to and use of related services. Madison Alley ’16, Faith Park ’16, Juliana Schneider ’15, Su Yadana ’17 and Sara Tyberg ’16 were the first Dickinson students to join the 10-member, dual-hemispheric team.

“Instead of just learning about aging as a broad phenomenon, we were really able to see how it impacted small communities in two cultures,” says Tyberg, a sociology major and East Asian studies minor who is pursuing health-studies certification and has studied Japanese since her first year at Dickinson. “It was an incredible experience.”

From Cumberland to Akita

The program began last spring with a semesterlong course on health care and aging in Japan, which rolled out a universal health care system about a decade ago, and in the U.S., which provides services to seniors under the Affordable Care Act, Medicare and Medicaid. Associate Professor of East Asian Studies Shawn Bender provided instruction on Japanese culture and elder care in Japan, while health-studies professors John Henson (biology) and David Sarcone (international business & management) drew from their expertise in research methodology and in the American health care system, respectively.

The international student-research team next spent four summer weeks in Cumberland County, Pa., followed by four in Yurihonjo, Akita Prefecture, a region in northern Japan that—like Central Pennsylvania—has a higher-than-national-average elderly population. The students also enjoyed a brief home-stay in Japan, with one Dickinson student and one AIU student staying in each host home.

In both locations, they met with regional and national health care professionals and policymakers and distributed a standardized, international survey to senior citizens (average age 74). The team also interviewed senior citizens, gathering context for their self-assessments, which included life histories and stories about themselves and their experiences.

“It was interesting to see some of the cultural differences and similarities,” says Park, an international student from South Korea, who noticed some correlations between Japanese and Korean attitudes toward aging. She also noted that American senior citizens were much more likely to talk about their families and about religion than were their counterparts in Japan.

Interestingly, the Japanese senior citizens had better self-reported, overall physical health and did not take advantage of government services as often as the Americans, possibly because of their slightly younger average age.

“Every single one of them had a story to tell and advice to share,” says Schneider, a biology major who is planning a career in medicine. “It opened my eyes to the need to provide optimal care for older populations.”

At the close of each four-week trip, the students analyzed their results and presented their preliminary findings, first at Dickinson (in English) and then in Japan (in English and Japanese). In all, they transcribed 171 interviews and collected 164 completed surveys.

“If you think about the length of time they had to prepare and present their work, you realize that this is an amazing accomplishment,” Bender says, adding that the students were conducting senior-thesis-level research.

“When we were working smoothly, it was because we had made connections with each other and were listening and communicating effectively. When we had problems, it was because we had disconnected on a personal level, and we really had to refocus and reconnect with each other to bring our research together again,” says Tyberg. “It was an amazing opportunity to work with new people and explore a new place while you learn.”

Students interested in health care, health policy and/or East Asian cultures are invited to apply to the 2015 Global Scholars U.S.-Japan session. The application deadline is Oct. 15.