Men of the World 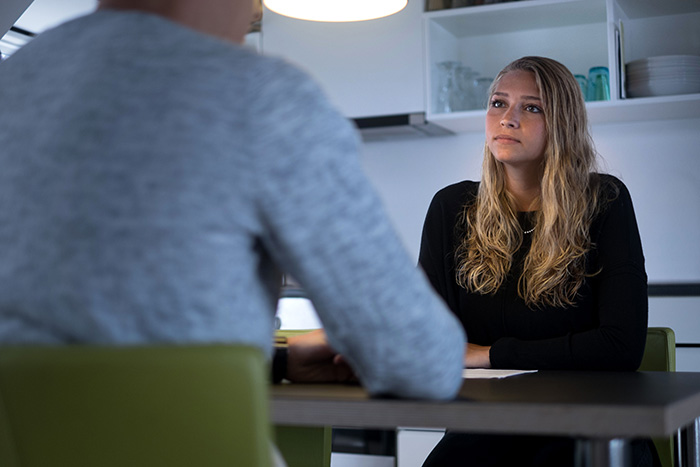 Sarah DiMuccio '15 interviews one of her male subjects during her junior year abroad. Photo by Ole Bo Jensen.

The young men at Sarah DiMuccio ’15’s Danish high school were different from those she’d known back home in the U.S. More open and affectionate with one another, they didn’t seem to feel a need to prove their own toughness. Observing them, DiMuccio began to wonder how notions of manhood are defined, culture to culture.

That was five years ago, during DiMuccio’s gap year in Denmark—just before she began her first year at Dickinson. Today, the recent graduate is a principal author on a paper on precarious manhood—the idea that one’s status as a man must be earned and continually proven—and young men’s ideas about their own male identities, across two cultures. Her paper, “A Qualitative Analysis of Perceptions of Precarious Manhood in U.S. and Danish Men,” will appear in the October issue of Psychology of Men & Masculinity, an American Psychological Association publication.

A psychology major and member of Psi Chi and Phi Beta Kappa, DiMuccio began to research ideas of manhood in Denmark and the U.S. during the spring of her sophomore year, as an independent study project with Megan Yost, associate professor of psychology and women's, gender & sexuality studies.

Yost was surprised when DiMuccio approached her about the project, not only because she had not had DiMuccio in class, but because it’s highly unusual for students to propose a research project so early in their undergrad careers. But Yost was intrigued by the topic and impressed by DiMuccio’s well-conceived plans, so she agreed to take it on. And she was not disappointed.

DiMuccio also applied for a Student International Research Fund (SIRF) grant through the Center for Global Study & Engagement so she could continue the work while studying abroad in Denmark the following spring. Because Yost was then on maternity leave, and because the interviews would be conducted in Danish, DiMuccio completed this part of the study under the direction of the psychology department’s Danish-language expert—her mother, Professor of Psychology Marie Helweg-Larsen.

During her semester abroad, DiMuccio interviewed young Danish men—a daunting task, despite her language skills, since the lengthy interviews delved into abstract concepts about culture, gender and identity and included ideas, concepts and references that were not always easily translated.

Back on campus for her senior year, DiMuccio analyzed the data—her favorite part of the project—all while completing a separate senior project on the precariousness of womanhood and manhood, as seen in a diverse group of adults and working as Helweg-Larsen’s teaching assistant.

She held weekly meetings with Yost, who continued to oversee her work with English-speaking subjects, and with Helweg-Larsen, who oversaw the overseas work. After graduation, DiMuccio moved to Denmark to work as an academic assistant at the Danish National Research Foundation, where she assisted on research funded by the country’s National Institute of Health. She continued her weekly conversations with Yost and Helweg-Larsen via email and Skype.

The research team found some similarities between the two groups: Both U.S. and Danish men talked about manhood—or "manddom" in their language—in terms of acting like an adult and protecting others. There also were significant differences: U.S. men contrasted manhood to womanhood, while Danish men contrasted manhood to boyhood. DiMuccio completed the paper outlining these findings, with input from both professors, last fall.

“The process taught me a great deal about conducting interview research and conducting research internationally, and the fascinating results made it all worth it,” says DiMuccio, who was particularly intrigued when one Danish respondent stated that he believed feminine attributes were important to manhood—a sharp contrast to the responses she’d received in the U.S.

Hillary, Donald and beyond

Today, DiMuccio is back in the U.S. and enrolled in a graduate program in social psychology at New York University, with full funding from a Henry M. MacCracken Fellowship. She plans to become a professor at a liberal-arts college like Dickinson one day. (“That would definitely be the dream,” she says.)

Meanwhile, she’s examining the constructs of masculinity and the precariousness of manhood in the context of political attitudes toward presidential candidates Donald Trump and Hillary Clinton. DiMuccio also is principal writer on a paper-in-progress that’s based on her honors thesis, and she hopes to co-publish that work, with Yost, in the coming year.

“It really is unusual for an undergrad or new graduate to publish a paper, particularly as first author, because it means that you do more of the writing, make more of the decisions and are responsible for all aspects of the paper,” says Yost, noting that it’s even more unusual to have an additional pending publication just one year out of college. “Sarah did all of those things, and she did a great job. It looks like this is just the beginning of a very bright career.”