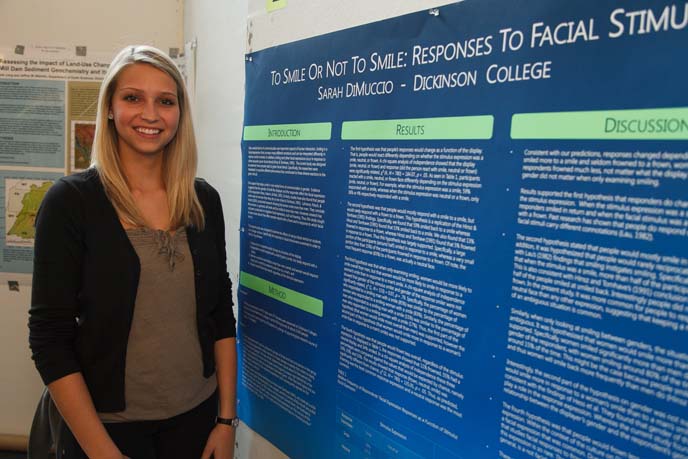 The 28th-annual Science Student Research Symposium brought together science students to share what they’d learned in the lab and in the field the previous year.

“An event like this is really important, because it prepares us for grad school and for the experimental aspects of our fields,” said biochemistry and molecular-biology major Rizwan Saffie '14. “It’s made me much more confident in my research and presentation skills.”

Held in the Rector Atrium, the symposium showcased 62 student and student-faculty research projects and reflected the recent work of approximately 100 students at different points in their academic careers. A handful walked into the symposium as award winners—having already earned honors for their research within their departments—but only five seniors walked away with interdisciplinary-symposium awards.

Biology major Megan Stekla ’15 earned accolades for work she conducted over the summer at the University of Richmond that supported the hypothesis that myosins—a family of organelles that generate a source of chemical energy—figure prominently in several human diseases.

Neuroscience/biology/psychology major Songhui Zhao ’13received notice for her research on the interaction between mechostimulation and chemostimulation in the larval feeding and swimming structures for a species of mollusk. And Melia Bonomo ’13, Casey Caslin ’13 and David Lifschitz’13 were recognized for their use of video and geometric modeling to analyze the singularity that forms at the tip of water droplets that have frozen on a flat surface.

At home and afar

Many of the presenters, like Miguel Rodriguez ’13 and Sarah DiMuccio ’14, conducted research on campus and in nearby communities, while others, like Brett Weidman ’13 and Emma Sanborn ’13, worked at partnering organizations across the country or across the globe.

Rodriguez, a mathematics major, developed a program that creates detailed crop-rotation plans for the Dickinson College Farm. DiMuccio, a psychology major, tracked on-campus passersby responses to others' facial expressions and discovered that people were more likely to return a smile than a frown and that women were more likely to smile in response than men.

Sandborn, a neuroscience major, incorporated original research into her study-abroad experience at the University of East Anglia (England), when she assisted with research on patients who suffered complications during cataract surgeries. Closer to home, Weidman, a biochemistry & molecular-biology major, analyzed chemicals in hazardous oil-production waste at a major Central Pennsylvania laboratory, and plans to explore career options in that realm.

The atmosphere in the Atrium was energized as the students outlined the details of their work to interested professors and peers, but this was not an overly anxious crowd. Each presenter had plenty of practice, having previously described their work in class and at departmental presentations. Many had even participated in regional, national or international professional conferences.

DiMuccio, for example, had presented her work at a psychological-association conference in New York; Aaron Brumbaugh ’14 had received a prestigious grant to present green-chemistry research to biochemists in New Orleans; and  Saffie, Eric Epstein ’14, Tracy Campbell ’13, Pheobe Oldach ’13, Natalie Stanley ’13 and Stuart Changoor ’13 presented findings on the expression of acute myloid leukemia cells at an annual cancer-research symposium in Washington, D.C.

"That [symposium] opened my eyes to the complexity of the problem of finding a cure for cancer, because all cancers are different, and individuals respond differently to them," said Changoor.

Still, the majority of students related that while the big conferences were thrilling, it was also gratifying to share their results with friends, classmates and professors in different disciplines.

“A lot of us have dedicated so much time to these projects, and it’s great to see what everybody’s been working on,” said Weidman. “What you see is that, across the college, we’re doing research that actually matters.”