One Woman, Many Voices

During her senior year at Dickinson, Brittany Barker ’15 produced two major works exploring her identity as a young black woman and on the importance of community for women of color. A little more than a year later, her one-woman show expands on—and exemplifies—that work.

Barker staged Black Girl Third Space: Standing Upright in the Crooked Room Aug. 4-5 at Theaterlab, a midtown Manhattan venue dedicated to promoting experimental arts and emerging artists. The spoken-word performance offered an emotionally charged account of her own search for self and community and included an onstage appearance by Dickinsonians who are part of that journey.

A New York native and Posse Scholar who competed in a prestigious spoken-word poetry competition as a high-schooler, Barker majored in English with a minor in creative writing and made her mark on campus as cofounder of Exiled Poetry Society.

She says the idea for her recent show originated in discussions with friends and crystallized during a class discussion, led by Associate Professor of American Studies Jerry Philogene, about Homi K. Bhabha’s third-space theory. If identities are shaped by multigenerational experiences, and if people of color occupy a separate space in society because they’ve been displaced, Barker wondered, how can women of color transform this “third space” into a place of healing? 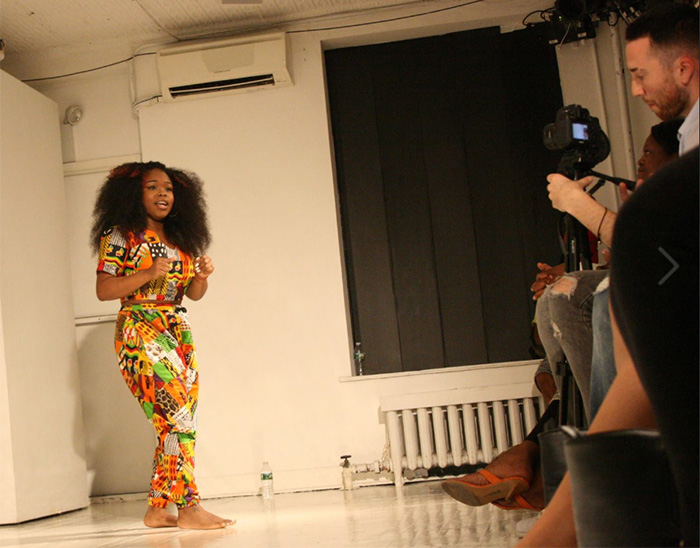 Inspired, Barker wrote her English senior thesis analyzing the work of singer-songwriter Lauryn Hill through a third-space lens and also incorporated the idea of a healing third space into a creative-writing manuscript, “Black Girl Third Space.” She continued to work on her poems after graduation, using some of them in her new, full-length theatrical work.

In her one-woman show, Barker used autobiographical verse to describe black women’s struggle to forge an authentic identity in the face of racism and sexism. The work applies Bhabha’s theory and also draws on writings by feminist scholar Melissa Harris Perry, whose book Sister Citizen: Shame, Stereotypes and Black Women uses a “crooked room” metaphor to explain the oppression, shame, identity renegotiation and other factors inherent in black women’s experiences. And because those identity-forming experiences are both personal and shared, Barker adapted one poem to include a theatrical chorus, representing the greater community of women of color.

“These are women I love deeply and have learned from, women who have challenged me and created figurative homes for me,” says Barker, who met with the chorus members several times for rehearsals in the weeks leading up to opening night. “They made the poem their own and even gave me advice on how to work other sections of the show.”

There were still more Dickinsonians in the audience, including Philogene and Associate Professor of Africana Studies Lynn Johnson, who both traveled to New York by train with students to attend the performance. Both professors were deeply moved as they watched a former student apply classroom lessons to her art.

“It was really beautiful to watch,” says Philogene, who notes that Barker drew a full house in the white box theatre. “The poems were incredibly heartfelt and poignant—many people in the audience were crying.”

The performance was the first in a series of original works exploring the black female experience, says Barker, who plans a final show “centered solely in joy.” Meanwhile, she’s in her final year of a master’s program at Relay Graduate School of Education and teaches at a charter school in Brooklyn. Her long-range plans are to develop a production company for female artists of color and, eventually, earn a doctorate in English.

She says she finds herself in excellent company. “What I learned [through this performance] is that there are cohorts of women whose life stories have followed a tune similar to mine,” Barker wrote in a recent blog post for Girls Write Now, a nonprofit organization that teams youth writers with professionals. “I learned that no matter how different our experiences are, we hum the same song.”