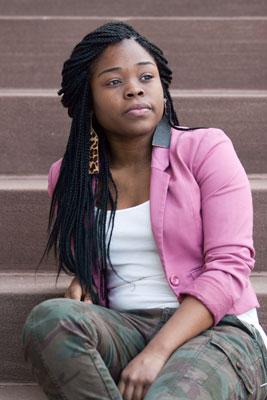 by MaryAlice Bitts-Jackson Walking down the street in New York City last year, Brittany Barker ’15 saw a person in need and gave what she could. Her childhood friend scolded her, asserting that the homeless create their own misfortune. For some, the incident would have been nothing more than a fleeting friction between friends, but Barker channeled it into powerful verse that brought down the house—and, possibly, opened a few minds—at a national poetry slam sponsored by the New York Knicks.

A Posse scholar and English major, Barker is an award-winning poet whose work has taken her to a Times Square theater and to the White House. But while her words sizzle onstage, it’s the ways they connect her to like minds that motivate her most.

Barker began writing poetry in sixth grade, filling a notebook with verse. Four years later, she caught a documentary about a national poetry slam and was hooked. The slam, which draws thousands of teen competitors each year, was sponsored by the New York Knicks and Urban Word NYC, an organization that presents youth programs in creative writing, journalism, college prep, literature and hip-hop. Barker signed up for a workshop.

“I was intimidated at first, because a lot of the poets were the ones I’d seen on TV, so they seemed like celebrities to me,” she says with a laugh. “But I got good feedback—I had a lot of people encouraging me. They helped me find my voice.”

Barker also tapped into Girls Write Now, an organization that pairs teenage female writers with professional women writers. After a dizzying, speed-dating-like interview process with a flurry of potential mentors, she was paired with a 71-year-old fiction and medical writer. “I thought, ‘What in the world will I have in common with this lady?’ ” she recalls. “But we had great conversations. And she encouraged me to get out there and compete.”

That encouragement paid off: In her first Knicks competition, Barker made it to the finals. The following year, she placed in the top three for “The Art of Giving,” the poem inspired by her friend’s response to the plight of the homeless. Last spring, Barker was one of 10 youth poets who participated in a White House workshop, hosted by the Obamas, that included performances by Rita Dove, Billy Collins, Steve Martin, Alison Knowles, Aimee Mann, Elizabeth Alexander, Common and Jill Scott.

Asked to comment on the White House experience, Barker credited her mentor for inspiring her to achieve, calling her “a miracle, guardian angel and my second mother, all wrapped up in one.” And she hopes to do the same for other young writers one day.

Meanwhile, she’s promoting poetry at Dickinson through Exiled, a new spoken-word student group on campus. Her vision for the group mirrors her larger life goals.

“Exiled’s mission is to talk about things most people are not comfortable talking about, and I’ve found that the more honest and personal a poem is, the more deeply people seem to respond to it,” she says. “It’s not about us, the poets, but about the people who hear our work and how they connect with it.”