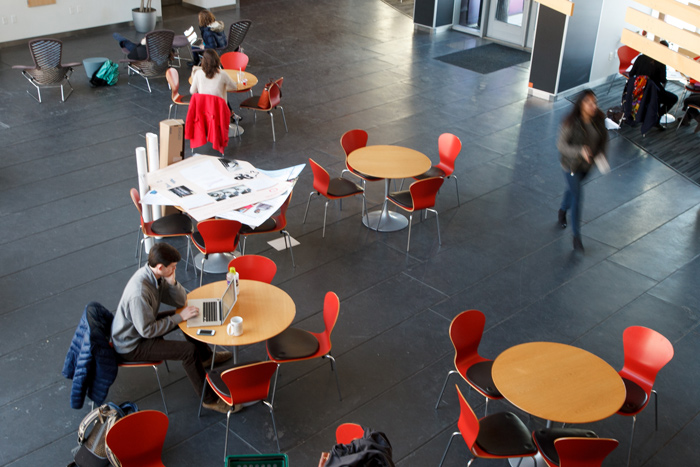 It’s been two months since we last checked in on the Innovation Competition at Dickinson (IC@D), a new student-led initiative that encourages student entrepreneurs to develop business ideas they’re passionate about. Now, in the contest’s final stretch, the five finalist teams are fine-tuning their budding ventures with help from alumni and parents who themselves have blazed paths on the entrepreneurial trail.

“I was always an entrepreneur at heart, but I couldn’t pursue [those dreams] as a student,” says cosmetics entrepreneur and chemist Vince Spinnato ’97, noting that back in the day, interdisciplinary business opportunities like these did not yet exist. “From my 20 years of being an entrepreneur, I know that this kind of experience will be invaluable for the students.”

Throughout April, Spinnato and four other professional mentors will share what they've learned with each of the teams they're mentoring. Their goal will be to help their team advance to the final round, April 30, when the three remaining teams will pitch their ideas to a panel of alumni and faculty judges to compete for the $2,000 grand prize.

Meet the alumni and parent mentors

For Arrix, who started his own sports agency in 2004 and purchased his third entrepreneurial venture, athletic-gear company LAX.com, in 2010, a clear strategy is key. “Many people have a lot of sound ideas, but executing them is a challenge, and most people don’t realize just how difficult it can be,” he says. “So as people look at entrepreneurial opportunities, practical advice about how to prioritize and where to focus can make a difference in whether their initiative is going to be successful.”

“It’s great, because I have no prior business experience,” says Team Gel-Sox’s Abbey Fisler ’17 (environmental studies, international studies, Italian studies), who teamed up with Nam Nguyen ’18 (undeclared) and Rita Stern ’17 (earth sciences) to develop a product aimed at busy athletes, “and I’ve learned a lot about how to strategize and write an effective business plan.”

Benjamin Compaine ’67, director of the fellows program at the Columbia University Institute for Tele-Information and lecturer at Northeastern University, mentor to Team Sharing

Compaine, a program director and software-company entrepreneur who has been a longtime reunion volunteer, believes there is much to be learned from missteps. While offering the students solid advice about how to drive profitability, he also encourages them to prepare for the inevitable bumps in the road.

A political-science major and editor of The Dickinsonian at Dickinson, Compaine went to Harvard Business School after graduation. He worked at a weekly newspaper while in grad school and launched his first startup venture, a weekly arts-and-entertainment newspaper in Philadelphia. Compaine quickly discovered that he needed more money in the company bank to keep a new business afloat, and he applied that lesson to an investment in another weekly newspaper—this time in Boston, where he co-directed a research program at Harvard. Though well-funded, his Boston startup was ousted when its competition upped its game.

“[An entrepreneur] must feel very strongly about the venture they are about to embark on, because rarely is a business venture a straight line,” says Compaine, who went on to co-found a software company and then sell his share to his partner after being offered an endowed chair at Temple University—a position that led to his current post in the entrepreneurship program at Northeastern’s business school. “Unless they are independently wealthy, entrepreneurs will need to be prepared for struggles, dark days of rejection or delay before success looks assured, if ever, and they must be prepared to redirect or revamp the original plan.”

Stang, who majored in biology, began with a dream and a basement office 12 years ago and now heads ProgenyHealth, a multimillion-dollar health care company that provides care-management solutions for premature and medically complex newborns. She was named Gold Winner for Female Entrepreneur of the Year in 2013 (Stevie Awards for Women in Business) and was recognized as one of the Ernst & Young's Entrepreneurial Winning Women in 2012.

“Dr. Stang is an amazing mentor, and her advice applies not just to the competition, but also to the future,” says Nguyen, noting that Stang spoke of the need to cultivate humility and self-awareness, and to find mentors who can guide them every step of the way.