There’s an App for That 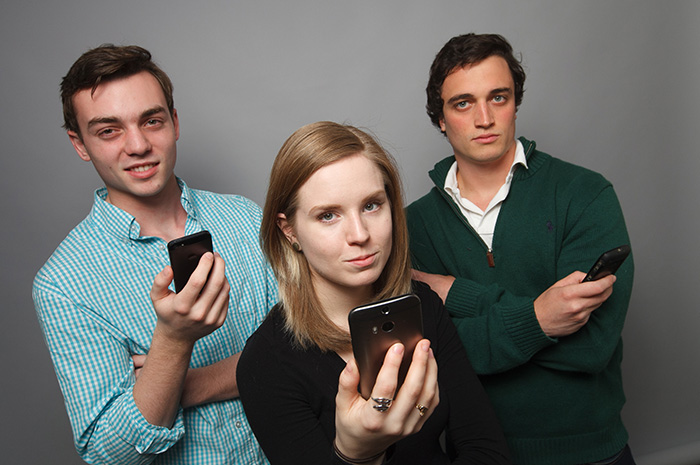 So you’re driving back to campus after spring break, and you get a text from a friend who doesn’t know you’re en route. You don’t want to text and drive, but you don’t want your friends to think you’re ignoring them. Back on campus, you stop by The Trout Gallery to check out the latest show. You want to learn more about the art, but you’re not sure how—especially since it’s hard to concentrate, given the avalanche of texts you’re fielding from friends in one of your clubs, as they decide on a time for the next meeting.

The good news: There’s an app for all of that, or soon will be. Student-entrepreneurs are pairing up with computer-science (CS) majors in Associate Professor of Computer Science Grant Braught’s senior seminar to bring everyday-problem-solving apps to life.

While senior computer-science students have taken on many faculty- and administrator-led app projects in the past, this marks the first time that this capstone course has brought three student-led projects to the table, partnering student programmers with their entrepreneurial peers.

Kevin Henwood ’18 was still in high school when he came up with the idea for his Clubb app, and, like many inventions, it was born of frustration. “I was involved in various groups and teams, but there was a huge problem with communication,” Henwood recalls. “It was hard to keep track of groups, planning events and meetings.”

Henwood’s app streamlines communications among members of a given student club, group or team via a group-messaging platform that also allows users to create, add to and access group to-do lists, votes, photo albums and event planning.

Computer-science majors Kevin Rosenberg '15 and Joanne Gilligan '15 built Clubb with Angel Shiwakoti ’17 (computer science, mathematics) and have already rolled out the beta version, as they work out the last minor bugs. Plans are underway for a new Club App feature, Clubb Events, which allows users to not just create group events, but to publish the event via community media outlets.

Together, Henwood explains, these tools not only help club members to interact more effectively, but also connect them with interested people outside of the club, such as audience members who might want to view a student performance or volunteers who might pitch in during a community-service event. "Our mission is for Clubb is to create a better, more involved community,” Henwood says.

Beyond the audio tour

Her vision: an interactive, exhibition-specific tool that draws inspiration from old-school gallery audio tours but is reimagined via sleek app technology. It also must be easily updated with each new exhibition.

Guan and Shang opted to build on the basics, using a WordPress plugin to convert a WordPress site into an app that includes zoomable images and audio clips that direct the user to important parts of the artwork, as well as external links for further investigation.

“It’s like carrying around a museum docent in your pocket,” says Kearney of the app, which is available for download and can be used through Web browsers and Wi-Fi. (While users can skip around to learn more about any artwork in the current show, Kearney recommends going in order so users can see the exhibition as intended, an idea passionately supported by a recent artist-in-residence).

The Trout Gallery plans to overhaul the app in advance of each new exhibition and to archive materials from past shows. The Trout Gallery also has purchased a fleet of iPad Minis, which visitors can use while taking in an exhibition.

The first incarnation of the app was rolled out in time for the opening of “Bones: Representing the Macabre,” an exhibition Kearney curated as her senior art-history project (on view through April 18). Response has been overwhelmingly positive, Kearney reports. “I took my Modern Art class through the exhibition the morning of the opening, and they all kept commenting, ‘This is so cool!’ ” she says.

The idea for the Android-based Text n Drive app came to Eddie Finocchiaro ’15 while he drove from his home in Farmingdale, N.Y., to Carlisle, the fall of his sophomore year. “My mom was worried about me driving alone but did not want me to use my phone,” says Finocchiaro, an international business & management major. “I thought of an idea to link SMS messaging to GPS software. So if you’re on a road trip, the software will automatically spit out updates as often as you like—such as every 50 miles, 30 miles, or every hour.”

Finocchiaro kept the idea under his hat until last semester, when he presented it to Braught’s senior seminar, quickly catching the attention of computer-science majors Matt Brown ’15 and Mark Nicosia ’15. “We really liked Eddie’s idea,” Nicosia says. “Texting and driving is a dangerous habit, and we hope this app will encourage users to stop doing it.”

Like all computer-science seniors, Nicosia and Brown had developed software for laptops and desktops, but this would be their first chance to develop an app from start to finish and their first attempt to apply the Java programming language to the Android platform. The team spent the first month of development learning the Android environment before diving in. According to Finocchiaro, Text n Drive will be ready to roll out in a few weeks.

While neither Nicosia nor Brown intend to pursue careers in app development after graduation—Brown will begin working as a cloud-support associate with Amazon Web Services in Herndon, Va., while Nicosia will join RDA Corp. in Hunt Valley, Md., as a software developer—they expect to tap many of the technologies they learned through the project.

It’s all excellent practice for the workplace, Braught notes, since those who work in computer science must regularly teach themselves new tools and programming languages on the job. And there are other far-reaching benefits too.

“Communications between technical software developers and non-technical clients is often challenging,” Braught explains. “Having a chance to experience that dynamic firsthand creates a great learning experience both for the CS students doing the development and for the student with the idea.”