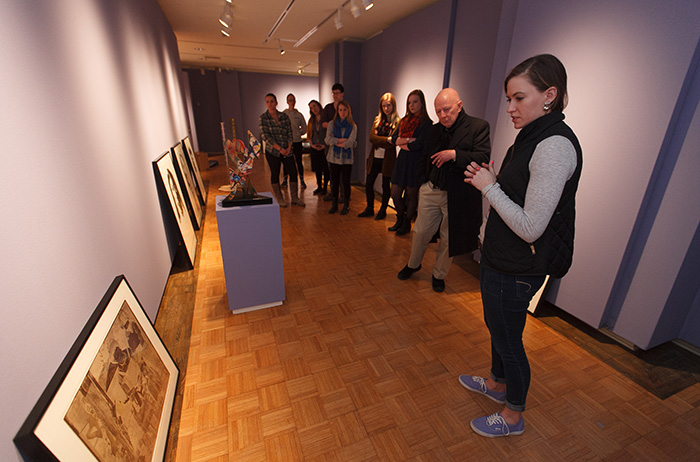 Excitement always runs high as the art & art-history majors prepare for their senior exhibition, and the 2015 show, The Spirit of the Sixties: Art as an Agent for Change, more than justifies the hoopla. But there’s a little extra sparkle and buzz this year as, just one week before the opening reception, the student-curators previewed their exhibition to one of the most celebrated art critics of our time.

That man was Holland Cotter, the Pulitzer Prize-winning senior critic for The New York Times, and the second distinguished figure this month who visited Dickinson to work with art & art-history students. During his brief residency, the man who has helped shape the New York art scene for more than four decades did more than just deliver a public address. He also visited studio-art majors’ studios, held a Q&A session with art-history majors and offered an insider’s advice to the students behind The Spirit of the Sixties as they prepared for their opening-night reception (Friday, Feb. 27).

The son of a Boston physician, Cotter harbored an early devotion to language—encouraged by his mother, who often read poetry aloud during dinners with her children—and an appreciation for art, sparked by a childhood picture book about the artworks in the Louvre. After studying with poet Robert Lowell and earning a bachelor’s degree from Harvard University in 1970, he began work as an art writer and editor for the New York Arts Journal, Art in America and Art News. His poetic style, cultural acumen and discerning eye distinguished him as an eloquent writer and a leading presence in the explosive 1980s art scene.

Cotter also worked as a freelance art critic for the Times for five years before going full-time in 1998. Over the years he earned an M.A. from the City University of New York in American modernism and an M.Phil. in early Indian Buddhist art from Columbia University, where he studied Sanskrit and taught Indian and Islamic art. Although versed in the gamut of art styles, from Renaissance to street art and everything in between, he’s perhaps best known for introducing readers to contemporary, non-Western art, a cause dear to his heart.

In 2009, Cotter won the Pulitzer Prize for Criticism for articles that included his coverage of Chinese art. He’s also under contract with Alfred A. Knopf for a book on New York City modernism; other writing projects include a study of contemporary Indian art and a poetry manuscript.

While at Dickinson, Cotter talked about his life and career, his love of literary writing, the current art world(s) and the changes he’s seen in New York’s art scene since he began covering it decades ago.

He inspired studio-art majors like Carley Zarzeka ’15 to remain persistent and passionate, and to think broadly and globally about contemporary art. When James George ’15, an English major enrolled in an art-history class, mentioned that he was writing a senior thesis on pop art and Frank O’Hara’s writings, Cotter, who knew the legendary critic, suggested an additional angle on the topic and then pointed to salient resources.

But perhaps the most significant conversations arose between Cotter and the senior art-history majors, who had just completed their first exhibition catalog and were eager to hear the critic’s feedback and learn his views on writing, the changing role of art criticism, the current art market and more.

Kimberly Drexler, who co-curates the show with Kyle Anderson, Aleksa D’Orsi, Lindsay Kearney, Callie Marx, Gillian Pinkham and Sebastian Zheng, especially appreciated Cotter’s behind-the-scenes description of his object-by-object technique. “He told us that he tries to create a map of the gallery in his mind in order to understand the curator's vision,” Drexler said. “Next time I visit a show, I'm going to try to apply Mr. Cotter's approach.”

“It was a once-in-a-lifetime opportunity,” added D’Orsi. “His insights into the art world are unique and fascinating, and his eclectic tastes inspired me to think out of the box, in terms of art and artists to research.”

The senior art-history exhibition The Spirit of the Sixties: Art as an Agent for Change opens with a reception in The Trout Gallery (5-7 p.m.) on Friday, Feb. 27 and runs through April 11. Students will be available at the reception to discuss their research and curatorial processes. Mr. Cotter’s residency was supported by the Robert H. and Jane L. Weiner Art Endowment Fund.