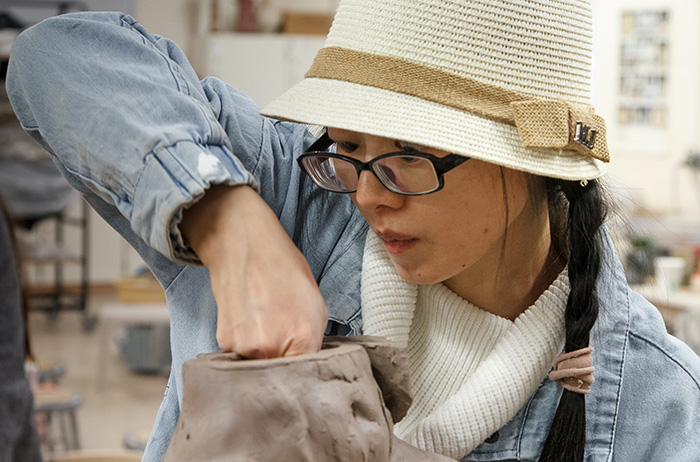 Tradition and postmodernism collide in new wave of Chinese art

Feng Weina recently kicked off the 2015 Sylvia J. Smith Visiting Artist Residency in the Goodyear ceramics studio, sharing the vision and techniques that distinguish her as a trailblazer in contemporary Chinese art.

The winner of coveted national awards in her native China, Weina was born in 1979 in Jingdezhen, a city south of the Yangtze River with an artistic tradition—and still-in-use kilns—dating back more than 1,000 years. It also is home to the Jingdezhen Ceramic Institute, where Weina, who earned a master’s degree in environmental pottery in 2005, now teaches.

Weina is best known for her series of ethereal-yet-earthbound angels, though she also creates abstract and figurative pieces. Her work springs from an artistic revolution in China that began in the 1980s and ’90s, as ceramic artists began to explore new and unexpected subject matter and techniques. A generation later, she and her husband, ceramicist Li Chao, are part of what’s become known as the second wave of Chinese artists who venture outside the bounds of tradition, producing works that recall ancient traditions in contemporary ways.

Weina will work in the Goodyear studio with small groups of students throughout her stay at Dickinson. She will present a public open studio and exhibition in the Goodyear Gallery on March 16.

According to Charles A. Dana Professor of Art Barbara Diduk, whose ceramics students draw inspiration from the country’s rich artistic heritage, Weina is the third Chinese porcelain artist from Jingdezhen to serve a residency at Dickinson in recent years. That includes Chao, who accompanies Weina on this residency, often serving as her interpreter.

Sophomores Megan Robitaille and Naviya Kafle were among the students who stopped by Weina’s earlier demonstration. “It’s interesting to see the traditions and cultural differences in her work,” observed Kafle, a double major in environmental science and biology, who is taking a studio-art class this semester.

“It’s really cool that the college brings in artists from across the country and around the world,” added Robitaille, a double major in art & art history and anthropology who also has enjoyed meeting with well-known professionals through Dickinson’s dance program. “We’re not in a bubble here—we are making contacts and getting a sense of what it is actually like, out in the world.”