Ellen Aldin ’13 wasn't particularly worried. She'd completed her outline—her first writing assignment as a study-abroad student in Toulouse—and was ready to hand it in. “It was a couple of bullet points … one page, tops,” she recalls. “But when I got to class, the person sitting next to me pulled out this giant packet of single-spaced [pages containing] every single detail that was going to be in their paper. That was a bit of a shock.”

The takeaway? Sometimes knowing the simple definition of a word—like “outline,” “test,” or “paper”—is simply not enough. Although French and American academic cultures share some ideas of what constitutes good writing and how to achieve it, study-abroad students like Aldin cannot perform at their best if they don’t understand their host country’s educational culture and writing conventions.

Additionally, they must learn to navigate this new educational landscape while adjusting to life abroad and while sharpening their foreign-language skills. “What we’re seeing is that in addition to culture shock, students can experience writing-culture shock,” says Writing Program Director Noreen Lape, noting that each can exacerbate the other.

A new satellite writing-center program, housed in the Dickinson Center in Toulouse, is there to help. 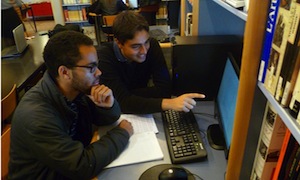 The Toulouse writing program is an outgrowth of the Multilingual Writing Center (MWC), an on-campus resource that Lape created a year after her arrival in 2009, in collaboration with a foreign-language faculty advisory committee.

“After listening to faculty, students and administrators across campus, I came to realize that when we say we have a global campus, we mean it. The MWC reflects and is part of that culture,” says Lape, noting that the foreign-language departments at Dickinson have worked together to create a truly global writing program where students can find peer language and writing tutors for 11 languages. “To the best of my knowledge, no other American college or university is doing anything quite like it.” And it is flourishing. MWC tutors logged 800 visits in 2010-11, 1,200 visits in 2011-12 and 1,500 last year.

A writing center offering support to students studying off campus was a logical next step. Lape collaborated with Sylvie Toux, director of the Dickinson Center at Toulouse, and Lucile Duperron, associate professor of French, to make it happen. In turn, Duperron modified MWC programming to meet the specific needs of Dickinson study-abroad students in France, with assistance from Toulouse Center intern Anna Ciriani-Dean ’12, who had studied in Toulouse during her junior year.

While the Toulouse center has always offered tutoring services, Duperron notes that the satellite writing center brings peer tutors, students and instructors together to create an intercultural space where American students can interact directly with French peer tutors who have experienced the American system. Together, they work on French linguistic and cultural writing conventions and practice French academic-writing genres. The result is a pedagogical roadmap to the French university culture and to French-language writing that mediates challenges in the classroom and helps students assimilate to their host cultures.

Asked to describe the differences between the French and American academic experiences, former study-abroad students easily tick off examples. In an interview podcast available on the MWC's Going International blog, Aldin says that her French professors “just go to the microphone, talk at you for an hour and then leave” and speculates that had her professors been more approachable, she would have had an easier academic transition. But after Aldin sought help from a tutor, she found her way. “It’s a different track of thinking, but it makes sense after a while,” she says.

Christina Socci ’13 reports that, like Aldin, she was taken aback by the intricacies of the French term-paper outline (“They color-coded them!”) and adds that French academic writing seems accordingly rigid. “All of your thoughts have to go into this pre-organized format,” Socci says, referring to a an academic convention that Aldin describes as “the difference between fitting things in boxes versus flow.”

Adding to the confusion, this writing structure is counterbalanced by open-ended tests. Socci recalls a midterm option that consisted entirely of a two-word prompt. “ ‘American feminism’—that was it," she says. "They give you this breadcrumb, and you have to extrapolate all this stuff out of it. It’s so counterintuitive to the way we think about writing and giving a presentation.”

Lape notes that while some study-abroad students regard differences like these as impositions, others— those who understand the culture behind the differences—can view them as in-depth intercultural experiences. The satellite learning center is helping Dickinson students in Toulouse to cross that bridge; a second satellite writing center is currently being considered for students studying in Dickinson's study-abroad program in Bremen, Germany.

Seen in this light, study-abroad students who are surprised by the open-ended nature of French test questions may gain new appreciation for France's national fondness for and comfort with philosophical argument, and their encounters with French student/professor dynamics could bring new insights to French views concerning individualism and autonomy. Socci makes a fascinating observation along these lines when she remarks that years of intricate outline writing has created a nation of students who process and organize some information a bit differently from most Americans. "They thought in outlines—it was incredible,” she says.

Looking back, Socci admits that it wasn’t easy to adjust her writing to conform to French standards, but she persevered. And while she calls the day she submitted her final paper to her French professor “the scariest day of my life,” she emerged victorious.

The paper was a dissertation—a form that includes a thesis, antithesis and synthesis. Her professor told her that she’d done very well.

“That took me completely by surprise—I was able to somehow, in spite of myself, figure out this system,” Socci says. “I realized that I could do this. I could conquer the dissertation.”