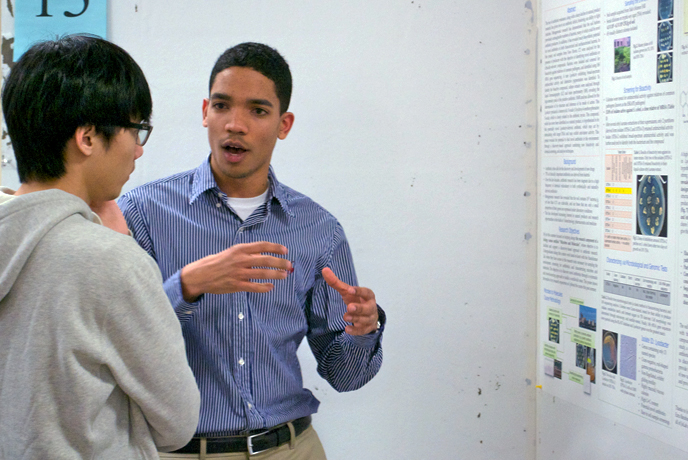 Suleiman Sudah '15, Nate Armistead '13, Samantha Levin '13, Emma Campbell '13, all students of Assistant Professor of Biology Missy Niblock, are using a cryostat machine this semester to carve sections of mice brains. They measure expression levels of key receptors related to respiratory disorders, in hopes of learning more about human respiratory disorders that are more prevalent in males, such as sleep apnea.

"It's been really cool to work with mice for the first time," says Armistead, who also studied NRK cells at the University of Richmond and held a summer internship at the National Institute of Health. "We noticed that the males had a lot more stimulation, and that's significant."

"A lot of people use statins to lower their cholesterol, and it's been suggested that [the drugs] might have some anti-inflammatory properties," says Gessay, who, just a few weeks into the project, has already learned sterile-lab techniques such as cell treatment, harvesting and plating. "That means that it could potentially help patients of lot of different diseases."

While Gessay, a neuroscience major, hopes to learn whether statins could have an effect on Alzheimer's patients, Marrero, a biology major with plans to pursue a career as a surgeon, focuses on the impact of statin use in surgery patients. "Our hypothesis is that expression is increased, and that's what we're seeing so far," Marrero says. "It's exciting, because a lot of Americans take statins, and a lot of Americans have surgeries."

While many students conducted research on campus, others worked at partner institutions in the United States or across the globe. Evan Johnson '13 studied the effects of human encroachment in waterways within Kenya's Mimana Rift Valley, while students of Assistant Professor of Biology Scott Boback worked at a local fish-hatchery pond, investigating teh relationship between environmental temperature and changes in the local painted-turtle population.

According to Marrero, experiences such as these help students pinpoint areas of interest and get a head start on their selected careers. "For me, this is a first step into surgical research," says Marrero, who researched leukemia at Hershey Medical Center last summer and will begin his studies at the center's medical school in July. "That's invaluable."

"You go from learning in a classroom, sitting and looking at pictures in a book about neurons and expression and protein, and then you actually go into the lab," Sulah adds. "All that you learned in the classroom absolutely helps you and takes you to the next step."

The reverse also is true, says Christine Tallo '13, who interned at the Moffit Cancer Center in Florida last summer, analyzing a population-based study of hereditary breast cancer in young African-American women. "What I learned [in the classroom] helped me do the research, and what I learned over the summer helps me this semester in my epidemiology class," said Tallo, who will pursue a career in genetic research when she graduates in May. "It's all coming together for me."

Learn more about the biology department.