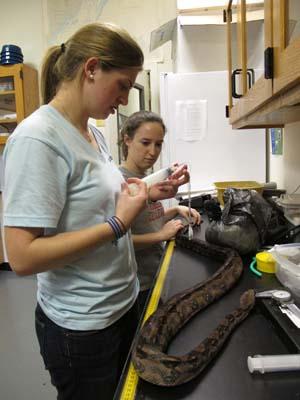 Allison Hall ’10 (left) says that she was initially a little squeamish about working with snakes. “It’s a normal thing to be a little afraid of snakes, but you really get into the project and come to love the animals.” Hall, Amanda Hayes ’10 (right) and Katelyn McCann ’11 (not pictured) are realizing the rewards of student-faculty research.

When we think about animals capable of complex brain functions, snakes may not come to mind. However, a student-faculty research team at Dickinson proved otherwise, and their findings are now gaining recognition in science communities worldwide.

Biology professors Scott Boback and Charles Zwemer, Assistant Professor of Mathematics Jeffrey Forrester and then-biology majors Allison Hall '10, Amanda Hayes '10 and Katelyn McCann '11 collaborated on a paper that was published this month in the Royal Society's Biology Letters, a prominent peer-reviewed journal for the British scientific community and scientists throughout the world.

The paper details their research on a boa constrictor’s ability to control constriction in response to its prey’s heartbeat.

“Many of us think of snakes as audacious killers, incapable of the complex functions we typically reserve for higher vertebrates,” says Boback. “We found otherwise and suggest that this remarkable sensitivity was a key advancement that forged the success of the entire snake group.”

While some snake species strike and kill with a venomous bite, a boa constrictor—as the name suggests—constricts by coiling around its victim and applying immense pressure. But just how does the boa know when to release its stranglehold and to begin consuming its meal? What cue tells the predator its prey has succumbed? To find the answer, researchers went to the heart of the matter.

They hypothesized that boas detect heartbeats and control constriction accordingly. To test this, the team simulated life in humanely euthanized lab rats. They created an artificial heart, implanted it in the rat’s chest and connected it to a pump, affectionately referred to as the HMH (Hall McCann Hayes), named after the student-research team.

Boback, who manages a research colony of 55 snakes on campus, then tasked his boas from Belize to test the theory.

“I will never forget the first time my students and I witnessed a boa constrictor responding to the beating of a simulated heartbeat in a rat.  I couldn't believe what I was seeing,” recalls Boback. “The snake visibly twisted and struggled as it felt the heartbeat in the rat. At that moment I knew we had just discovered something big. As the students shifted their gaze from the snake to me and back again, I told them I had never seen anything like this before.”

Hall says much is known about a boa’s ability to detect large-scale movement in its prey, but conclusive proof of the snake’s ability to associate a heartbeat with life and death did not previously exist.

Boback says the findings may lead to further investigation of snake capabilities and shed light on the evolution and adaptation of the slithering species.

“Our results help to more fully understand the complexity with which organisms interact with one another,” he says. “If snakes can sense movements as subtle as a heartbeat within their prey, they may be capable of much more.”

The student-research team of Hall, McCann and Hayes have bright feathers in their caps—they are published in a prominent scholarly journal. McCann says being published gives students pursuing graduate school or careers in research a leg up.

“I got to experience the true collaborative nature of research as well as the hours of independent work that go into the final product,” says McCann, a clinical-research coordinator at Children’s Hospital of Boston. “Now, working in research I feel like I truly understand the scientific method and what goes into any study.”

Boback agrees and adds that students have many opportunities to participate in meaningful research at Dickinson.

“Student-faculty research at Dickinson is an opportunity for students to experience science in action. It is the most fundamental level of learning in science as the student actively participates in the process of discovery,” he says.

Hall, who is a laboratory manager at Georgetown University and is currently interviewing with graduate schools, says students should take full advantage of opportunities to participate in research.

She advises students to be proactive and offers this to prospective students: “Talk to professors if you are interested in research at all. I started as a lab volunteer, and it evolved into this opportunity. It’s hard work but it’s also a lot of fun.”