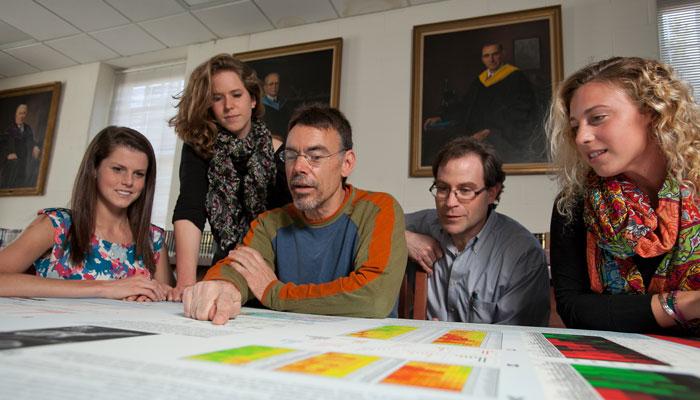 The team poses with the poster they used to present at the March 31 AACR conference in Chicago. “There are half-a-million experiments represented here,” Roberts says. From left: Catherine Campbell ’12, Natalie Stanley ’13, Michael Roberts, associate professor of biology, Jeffrey Forrester, assistant professor of mathematics, and Jamie Bugel ’13

In 1961, President John F. Kennedy announced to Congress that an American would walk on the moon by the decade’s end, and he was right. And when President Richard Nixon promised in a 1971 State of the Union address that America would soon find a cure for cancer, he had every reason to believe this was a goal of similar scope.

“Nobody thought, then, that curing cancer would be so much more complicated than sending a man to the moon, because nobody knew just how complex it is,” says Jeffrey Forrester, assistant professor of mathematics, explaining that there are more than 100 different types of the disease and that cancer is generated in many different ways. “Each [type of cancer] differentially exploits a set of very complex signaling systems. It’s a long road to discovering exactly how they work.”

A student-faculty research team led by Forrester and Associate Professor of Biology Michael Roberts has traveled that road as part of a bioinformatics research program, taking steps that may someday lead to a cure. Funded by a grant from the National Science Foundation, the program melds math and science techniques to explore new ways to approach a complex problem: how to reprogram leukemia genes. At the close of its third year, the program has generated new information—and unparalleled opportunities for student researchers.

After taking Roberts’ and Forrester’s courses in cancer biology and lab mathematics, the students began their research by introducing chemicals to human leukemia cells that would prevent the cells from dividing, inducing them to behave like noncancerous cells. They recorded the genes’ expression over time, capturing images of cellular activity at regular intervals within a 24-hour frame.

Because each cell contains more than 20,000 genes, the research generated huge data sets. Traditionally, biologists submit the data to mathematicians for analysis or plug it into a computer, but students in this program learned how to use the latest data-analysis software and how to analyze the data, old-school. “We want students to understand how they got an answer—and that there is more than one possible answer to a question,” Roberts says. By learning the language of another discipline, experts in a given area can improve communication with other members of a research team—and can approach a problem from new angles.

Using cluster analysis, the team detected patterns and classified genes according to the way they behaved under chemical inducement. Over three years, the researchers pinpointed 1,070 genes that they believe are key leukemia genes—an important step to discovering how to reprogram leukemia cells.

“We’re on the verge of real discovery,” says Roberts, who plans to apply for another grant to continue the program, possibly in conjunction with additional faculty in mathematics and computer science. “Our hope is that if these genes are key in leukemia, they may be key in other cancers, too.”

Program alumni already are applying what they’ve learned. Sarah Brnich ’11 garnered a Fulbright grant to conduct research in Argentina, where she collects data in rural areas and performs lab research. Abby Larson ’10, a research assistant at Johns Hopkins University, was recently accepted by several medical schools. Emily Swain ’10 teaches high-school science near Washington, D.C., through Teach for America, and regularly integrates mathematics into her biology lessons. While not an official member of the program—which kicked off when he was a senior—participant Josh Lichtman ’09 is pursuing a Ph.D. in computational biology at Stanford University. Phoebe Oldach ’13, who also took the coursework, recently received the Barry M. Goldwater Scholarship.

Meanwhile, the 2011-12 cohort of student researchers—Nicole Briceno ’12, Jamie Bugel ’13, Catherine Campbell ’12 and Natalie Stanley ’13—presented their findings on campus and at the annual meeting of the American Association for Cancer Research (AACR), which attracted approximately 18,000 cancer researchers from around the world. Roberts says that while bioinformatics programs are growing at the graduate level, it’s still uncommon for undergraduates to be cross-trained in this manner, let alone present at international conferences.

Stanley, a mathematics major, says she and her fellow researchers are grateful for those opportunities. “It’s really exciting to use mathematical tools and bioinformatics to understand [complex systems],” she says. “And it’s amazing to [perform research] that can have such an important effect.”