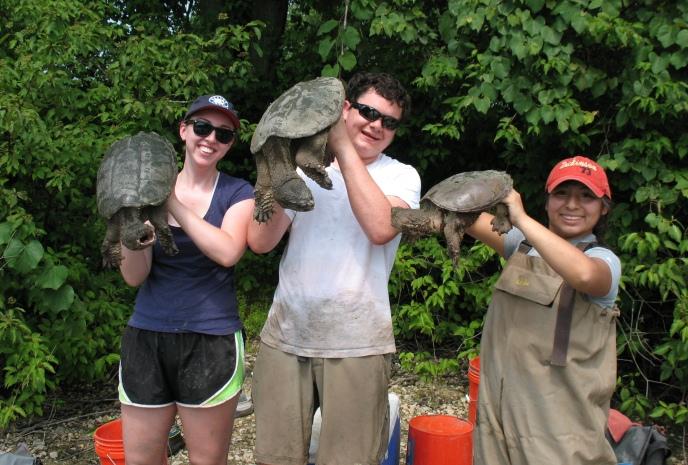 by Tony Moore  Dani Staunton ’13 hauls a net full of assorted turtles out of the murk of Huntsville Pond, and Andrew Veselka ’15 carefully reaches in and grabs a snapping turtle by its tail. As he begins to extract its prehistoric claw from the net with his other hand, the snapper hisses and its legs swim in the air. “They’re not too friendly,” Staunton says, steering clear of the turtle’s thrashing head.

Quickly identified by the students as a female, this turtle is just one of many to be pulled from the pond as a part of Assistant Professor of Biology Scott Boback’s summer research project. With grants from Dickinson Research & Development, the Center for Sustainability Education and the National Science Foundation, Boback was able to assemble his team with students eager to have an immersive research experience.

“With this project, the students get to see the nuances of nature because they’re out here every day,” Boback explains, sloshing out of the water to help with the snapper. “Subtle changes in water depth or temperature and how this might affect the organisms living there—only field biology can get you that perspective.”

“We could call this project ‘population ecology of painted and snapping turtles in central PA,’ ” Boback says, indicating that he and the four students are exploring both the daily habits and the lifecycle of the turtles in Huntsville Pond, located 10 miles southwest of the Dickinson campus. The summer project is an intense, monthlong study in habitat, animal behavior and data collection and recording that brings the students together to work as a unit.

“We’re monitoring the population of these turtles in the pond—capturing, marking and then taking measurements,” Boback continues. “Then we release them with the hopes of recapturing them and discovering various things: did they grow, are they healthy, have they reproduced?”

The study is designed to run for years, and this summer’s leg is only halfway complete, so much of the data the team is collecting haven’t been analyzed yet, but the health of the turtles is a factor that has some immediate transparency.

“We determine ‘condition’ or ‘health’ in a variety of ways: accumulation of scars, missing toes, holes in their shells, missing feet, clipped-off tail, etc.,” he says. “And fast growers are healthy, so our data reveal this pretty clearly.”

The water in which they all stand is part of an abandoned fish hatchery built in the 1930s by the state for recreation and to raise fingerlings to stock other ponds. To get to the site, they traverse a quarter-mile trail that appears to be an overgrown service road. Once they part the poison ivy that lines the trail, they climb down through the thick mud and into the water.

“The turtles come up to lie in the sun, so we use their behavior to our advantage,” he explains, pointing to one of the traps they’ve set, which looks like an overturned box floating in the water. “When they climb up to bask, they slip and fall [into a net].”

Once the students drag the net ashore, it’s time to either check the turtles’ marks or mark them for the first time. “We put so much effort into marking the turtles that almost every one we find out there is already marked,” Boback says, turning to the snapping turtle at hand. “This one though—this is the first time we’ve caught her, so she has to be marked.”

Five minutes later, Liz Brandt ’13 lowers the angry female snapping turtle back into the water, marked, weighed and measured. The creature looks back suspiciously and then eases slowly away, not knowing her role in research that involves every turtle in her pond.