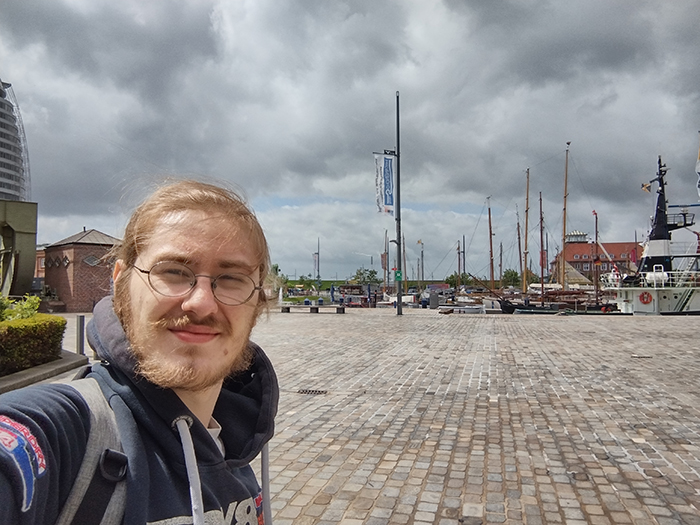 As a kid, Evan Bates ’23 dreamed of inventing villainous tech gadgets. As a Dickinsonian, he’s harnessing the powers of technology in a much more benevolent and meaningful way. After taking an introductory class in coding, Evan declared a computer-science major, and he enjoys the puzzle-like process of writing code that will create something useful. He’s also applying what he’s learning in German classes as a study-abroad student in Bremen, Germany.

Speaking to my computer science major, I like being able to create things in a way that works the same every time. It’s like a puzzle, and it can give me something at the end that I can apply and use. I like to say that it is an ultimate form of laziness; there’s a whole bunch of upfront work that allows you to never worry about that thing ever again (excluding bugs).

It’s hard to say, but I think the class that left the biggest impression on me was my First-Year Seminar, Speaking Truth to Power, with Professor of Educational Studies Noreen Lape and Assistant Professor of Philosophy Amy McKiernan. It was an excellent introduction to Dickinson, and I wrote one of my favorite papers of all time for that class.

… an inventor. Think mad scientist or supervillain kind of thing. I wanted to have the resources and tech to make interesting things and breathe life into them. Thank goodness for programming, right?

I am currently studying abroad in Bremen, Germany. It is wonderful, if stressful, to be able to put the language on which I have spent so much effort into practice. Universität Bremen is much larger than Dickinson. I am also loving the food and the public transport for sure. I will miss both dearly when I return to the U.S.

Take all the classes that sound interesting, if you can. I’ve loved my art classes, and I first discovered my deep love of code through the introductory course here.