Celebrating Excellence in Writing and Research 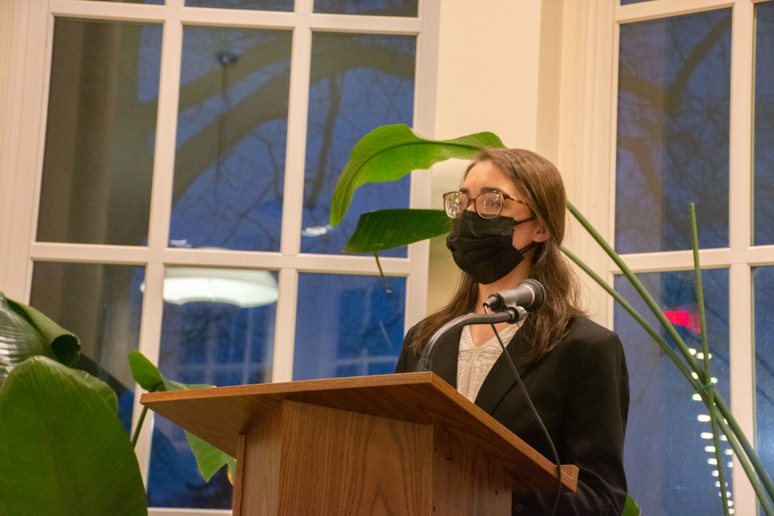 The first semester at Dickinson is a time of transition, as students adapt to more rigorous academic offerings and a new social sphere. The First-Year Seminar (FYS) helps them out on both counts by bringing them together with classmates who have similar interests and by shoring up their college-level writing and research skills. And the following spring, the entire campus community celebrates the best examples of what Dickinsonians can accomplish right out of the gate, and all throughout their college careers.

The FYS Excellence in Writing Awards are bestowed annually to the authors of the finest FYS final papers of the year. FYS essays of any length and in every genre are eligible. The winners are recognized during a special reception in the Waidner-Spahr Library. They also receive a certificate and a monetary award. This year’s writing-award honorees are Pranav Mishra '25 and Anna Wendel '25.

Dickinson also bestows awards recognizing excellence in research, including research by a first-year student. The most recent recipients of these awards are Jordan Schucker '25 and Trang Do '23.

Mishra had enrolled in A State of Denial: Understanding and Responding to Climate Change Denialism, a FYS taught by John Katunich, associate director of the writing program. His paper, “Bursting Filter Bubbles: Helping the Conversation on Polarizing Topics Such as Climate Change,” investigated connections between filter bubbles created by social-media algorithms and the perpetuation of climate denialism among social-media users.

Drawing from carefully vetted sources, Mishra skillfully led the reader step by step through a complex, multilayered argument, as the contest judges note, and argued that structured, in-person conversations may show the way forward to a brighter path. While he made it look easy, Mishra reveals that, like fine writers everywhere, he went through several revisions to achieve writing excellence. "When I learned that I had won the award, I felt that all my hard work was fruitful," Mishra says. "It was really heartwarming and a happy moment." 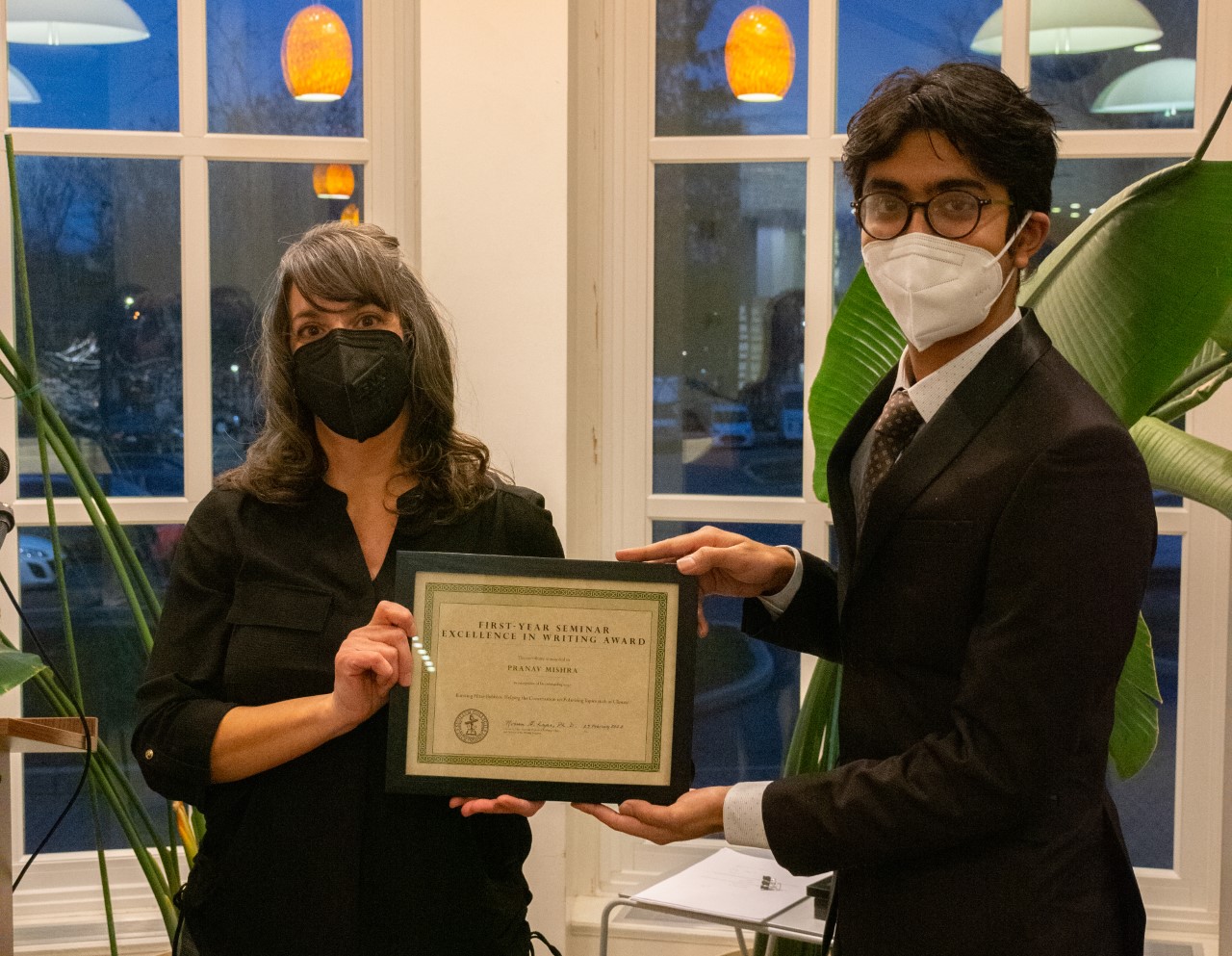 Wendel’s essay, “Mechanization of Men: Soldiers of the British War Machine,” closely examines disparate passages on war in Pat Barker’s novel The Eye in the Door and Siegfried Sassoon’s poem, “A Soldier’s Declaration.” As the contest judges note, she compared these passages “in such a way that they shed light on each other” and effectively demonstrated “how a writer and a poet with vastly different perspectives of war illustrate how soldiers become ‘pawns of war’ through ‘mob mentality.’ ”

Wendel wrote the essay as part of Professor of English Wendy Moffat’s 2021 First-Year Seminar, Riveters, Radicals and Suffragettes: Women in the First World War. The class of 2025 member is grateful to the staff of the Waidner-Spahr Library for hosting the reception in honor of herself and Mishra. Wendel also offers thanks to Moffat, both for encouraging her to enter the contest—and for imparting skills and knowledge she’ll use throughout her academic career and beyond.

"In high school, I think that a lot of students are, for all intents and purposes, sheltered from practicing essay writing that exists outside of the five-paragraph format, and don't internalize the power that writing holds when it isn't restricted in a performative way,” Wendel says. “Having a First-Year Seminar not only welcomed me into the real world of writing; it encouraged collaboration with peers, which is the reality of true academic communities. It taught me how to study, how to ask for help, and I loved the fact that it brought together students interested in so many disciplines under the umbrella of a common interest.”

Do, a double major in quantitative economics and mathematics, was recognized for an in-depth paper she wrote as a sophomore in a class taught by Associate Professor of Economics Anthony Underwood. “Ethnic Enclaves and Language Proficiency: Tracking Chinese Migrants in the United States" examines areas of the United States with high concentrations of people of the same ethnicity and explores the interactions, in Trang's words, "between ethnic enclaves and language proficiency, and how this multifaceted relationship impacts migrants’ labor market outcomes.” According to Underwood, it is master's-level, and likely publishable, work.

Schucker received the 2021-22 Waidner-Spahr Library Prize for Excellence in First-Year Research for an extensively researched project created while she was enrolled in Professor of History Matthew Pinsker's History 117 class. Using well-documented images, original video and links to secondary and primary sources, including a relatively unknown 1881 work by Frederick Douglass, she presented an accessible history of the 1880s-era United States that contextualizes the Jim Crow era.

"Although I was not expecting to receive an award from the library, I was very grateful and proud that my work was being recognized by the academic community at Dickinson," says Schucker. "This award has given me the confidence to know that I can be a good researcher and writer and to work hard. And it has made me want to perfect my writing skills as much as I can."

You can find out more about Schucker, Do and their research via the library's News and Events page.