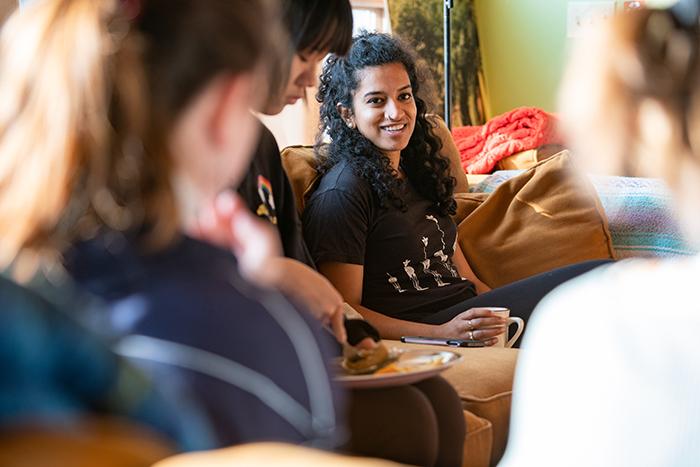 Varshini Prakash talks with students during a breakfast at the Center for Sustainable Living (Treehouse). Photo by Dan Loh.

In this episode, we tag along with Sunrise Movement co-founder Varshini Prakash during her three-day residency as part of The Sam Rose ’58 and Julie Walters Prize for Environmental Activism. We’ll hear how her grassroots organizing skills are inspiring others to combat climate change across the country.

Plus, Puzzlemaster and Associate Professor of Mathematics Jeff Forrester reveals the answer to last episode’s question and has a new puzzle about a game of chance. Know the answer? Email thegood@dickinson.edu for a chance to win Dickinson swag!

Inside The Rose-Walters Prize Residency with Varshini Prakash

Puzzler: “To Roll or Not to Roll?”

Prof. Jeff Forrester shares the new puzzler: “You are playing a game of chance with two friends. The first player chooses two consecutive numbers between 1 and 6, for example 3 and 4. Choosing 1 and 6 as consecutive numbers is also allowed. Then, one of the remaining two players rolls a (regular) six-sided die. If the roll lands on one of the numbers selected by the first player, the player who rolled the die loses. If not, one is added to the number rolled (with a six becoming a one) and if this value matches one of the selected numbers, the player who didn’t roll loses. If neither number matches, the player rolling the die rolls again and this process continues until someone loses. Now suppose you have the option of rolling the die or letting your friend roll it. Which option should you choose (or are they the same) and why?”

Listen to the new question at the 2:01 mark.

Email your answer to thegood@dickinson.edu for a chance to win some Dickinson swag!

Interim President Jones discusses the Campaign for Scholarships: Change a Life—Change the World and the college’s renaming of two facilities to better represent the institution’s past.

Subscribe to The Good on Apple Podcasts, Google Podcasts, Spotify and Stitcher. Find all of The Good's episodes on the podcast homepage.