Change a Life—Change the World 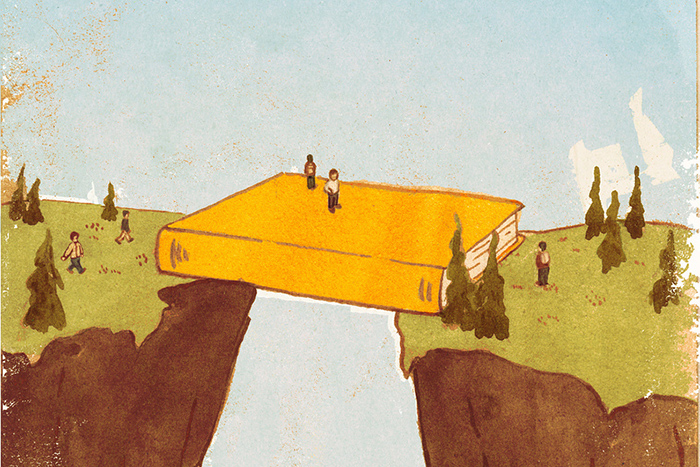 The Evolving Story of Scholarships at Dickinson

It’s an old story. It’s been told time and time again throughout Dickinson’s history. The oldest version goes something like this: A student goes home for summer break only to find out that a parent has lost a job, a family member has gotten sick, the family farm is doing poorly. The student returns to Carlisle in the fall, meets with a dean or the college president, says they don’t have the money to continue.

Or sometimes that story starts before the student’s first year. The student is ready to come to Dickinson. The talent is there, the drive is there, but the money is not. So what happens next?

As early as the 18th century, plenty of those stories end with that dean finding the student a job or taking up a collection from donors. They might not have yet used the word, but this, of course, is the story of scholarships, and it’s embedded in Dickinson’s very founding.

“Benjamin Rush founded Dickinson to prepare future leaders and engaged citizens to build a new democracy through the useful liberal arts and sciences,” explains interim President John E. Jones III ’77, P’11. “That means that this education could never be restricted to the very rich. From its founding, Dickinson was committed to inclusivity and affordability.”

The history of financial aid is much older than Dickinson. Using the word “scholarship” to refer to external funding to support a student’s tuition dates back to the 1590s, but the practice is even older. Fee-based higher education has its roots in ancient Greece, which means so does philanthropy aimed at paying for that education. Early higher-education donors included Alexander the Great, who paid tuition for hundreds of Aristotle’s students. Throughout the Middle Ages, “endowed chests” provided the first organized system of student loans and scholarships. Isaac Newton attended Cambridge as what was then called a “sizar,” one of the earliest forms of a work-study scholarship.

According to Dickinson’s Archives & Special Collections, the earliest mention of endowed scholarships dates back to the 1872-73 college catalog, in which trustees solicited donations of $1,000 to establish the first formal Dickinson scholarship funds. The mention shows how even in Dickinson’s first century, the need for scholarships had grown from isolated stories to a more predictable need. Between then and now, that need has become so widespread it’s baked right into the college’s budget.

Today, 68% of Dickinson students receive some form of need-based financial aid. The average institutional grant is $36,898, which amounts to $55.8 million annually. That’s not the kind of need that can be met by a dean finding a student a job or taking up an informal collection. In fact, 90% of that money comes directly from the college’s budget.

“This is why increasing donor support for scholarships is absolutely critical,” says Carlo Robustelli, vice president for college advancement. “Not only do scholarship gifts change individual lives, but they create a ripple effect. They enable those students to go on and change lives, and they strengthen the college and the experience of all students by increasing diversity in the classroom and enabling the college to invest more in the overall student experience.”

The way scholarships change lives is easy to see. Take a recent graduate like Jasmin Lopez ’19, who never thought Dickinson would be financially possible. Growing up in a single-parent home where money was tight, Lopez says, “my educational journey was a challenge because we didn’t know how to get to college.” Yet, thanks to an alumni-funded scholarship, Lopez attended Dickinson, where the close mentoring relationships with faculty and staff helped her not only become the first member of her family to graduate college but also forge a successful career.

“Without scholarship donors, I literally would not be where I am today,” says Lopez, now an associate account executive at Ethicon, a medical-device company specializing in surgical technologies and solutions. “You’ve made an impact on not just me but by sister, my family, all of my friends and the people that I’ll meet afterward. Because you contributed to my life, I’ll be able to go out and contribute to other people’s lives.”

Lopez is emblematic of how countless Dickinson graduates live out the ripple effect of scholarship giving. Of the 485 Dickinsonians who graduated this May, 330 would not have been able to walk down the Old West steps without donor-driven scholarship support. As those graduates become scientists finding cures for diseases or helping the world wrestle with climate change, leaders and artists inspiring others, or business leaders and entrepreneurs creating jobs and fueling the economy, the impact of that support reverberates around the world.

Perhaps no donor has given through Dickinson as much as Sam Rose ’58, whose endowed scholarship gifts and Dickinson Fund donations have provided more than $20 million toward scholarships and made Dickinson possible for more than 300 students. That kind of ripple can become a tsunami. Even just within the limestone walls of the college, Rose’s generosity has been transformational.

Driven by a desire to “level the playing field,” Rose’s gifts have battled socioeconomic realities that traditionally make college a bigger reach for students of color. He has helped Dickinson live up to its goals of diversity and inclusivity, increasing the percentage of students of color from 13% to 27% since 2012 and increasing the percentage of first-generation graduates from 8% to 20% during the same time.

From Isolated Stories to Common Need

Yet, as the growing financial aid numbers indicate, the need for scholarship gifts goes well beyond first-generation students. Over the last three decades, college tuition in America, adjusted for inflation, has increased at roughly 20 times the rate of the average family’s income. This means scholarship gifts increasingly make college possible for students from middle-income families. And that means that scholarship donors increasingly play a vital role for all Dickinson students.

"I received financial help to attend, and I want to pay it forward to others who will value and appreciate what this school has to offer,” says Mike Davi ’95, who along with his wife, Julie ’94, has consistently supported scholarships.

Steps to the Steps

For donors like the Davis, paying it forward doesn’t just mean enabling students to walk up the Old West steps and sign into the college. It also means supporting all the other steps along the way that help students walk down those Old West steps four years later ready for lives of impact. Because of its highly personalized educational experience, Dickinson has a four-year graduation rate that is more than twice the national average, and graduates launch successful careers more quickly and at a higher rate than most others. All of this means scholarship gifts don’t just fund tuition—they fund student success.

Accordingly, as the college prepares to launch its next major fundraising campaign this fall, Dickinson has launched a Scholarship Task Force to explore ways to expand the impact of scholarships. The 15-member task force made up of alumni and faculty has been meeting with staff to determine how the college can craft scholarships for many of the enhanced educational experiences it offers. This fall its members will present their recommendations to the board of trustees, which will then decide how to implement them in the campaign.

“We want to think more creatively and expansively as we consider the needs of our students,” says Jennifer Ward Reynolds ’77, the task force chair. “We have an opportunity to create a compelling case to underwrite or defray the expense of a Dickinson education through scholarships, internships, research opportunities or career exploration—all elements our students need to put them on the path to success.”

To understand this potential new scholarship model, consider internships. Over the last decade, internships have gone from a resume enhancer to a career-launching necessity, nearly as vital as attending college itself. Yet, the same way finances have played an unfair role in determining who can attend college, finances continue to limit who can take on an internship.

“Many internships are underpaid or even unpaid,” explains Damon Yarnell, associate provost and executive director of the Center for Advising, Internships & Lifelong Career Development. “As a result, students’ socioeconomic status can constrain their ability to pursue internships.”

This means that to deliver on its promise of preparing every student for the future, Dickinson needs to increase funding for internships. “To promote equity and to enable Dickinson students to build careers based on their talent and merit rather than their existing resources, the college needs to provide as much internship support as possible,” says Yarnell.

So as Dickinson looks to the future, the story of scholarships continues to evolve. Far from the isolated anecdote about helping an unfortunate student, scholarships today can support every aspect of what makes the Dickinson experience life-changing for every student. A scholarship supporting an internship will be just as important as a scholarship that enables a student to come to Dickinson. The same is true for scholarships for study-abroad experiences, student-faculty research, and other mentorship and leadership-development experiences.

And as these scholarships change the lives of students who become tomorrow’s leaders, scholarship donors also have the power to change the world for the better.

“At Dickinson, scholarship giving isn’t just giving someone financial aid,” says Jones. “It’s giving someone an opening to become a mentor, to complete an internship, to present at a conference, and this is exactly why our efforts in this area must be efforts of action— because we know that Dickinson gives remarkable people remarkable opportunities. To ensure our college is the egalitarian place we believe it to be, we must be able to provide for those who provide diverse views and who can and want to become the unifiers of our future."

Learn more about scholarship donors and the students benefiting from their support.