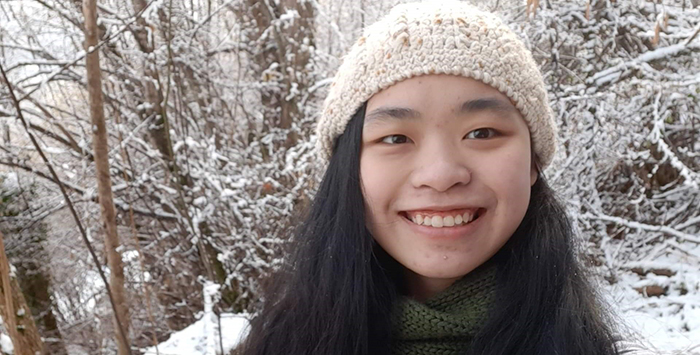 As a first-year international student, Anh “Kat” Pham ’21 didn't only have to adjust to life on campus, far from home; she also grappled with a different culture, language and educational system. Two years later, while studying abroad in France, she amped up the challenge by taking a French-language, graduate-level course at the Toulouse School of Economics. An additional hurdle arose when her study-abroad term was cut short by COVID-19, and she had to scramble to return back to the U.S. and secure housing so she could keep her hard-won summer internship—an internship she successfully completed. Now, she's preparing for the next big step. After graduation, Pham will return to Europe to enroll in the prestigious Erasmus Mundus master’s program and build an international career in STEM. Funded by the European Union, the Erasmus Mundus program accepts fewer than 50 students each year.

Below, Pham recalls these major milestones. Asked for advice for fellow students, she emphasizes the importance of knowing and believing in one's self—as she learned to do, by seeking out ways to continually learn and improve.

Sapiens, Homo Deus and 21 Lessons for the 21st Century by Yuval Noah Harari.

When I was in high school, I truly wanted to see the world outside of my familiar context. I wanted to go as far away as possible, to somewhere that would be totally different and so challenging that the adaptation to the life there alone would make me grow. So I did exactly that, flying across the globe from Vietnam to the U.S., and here I am still learning new things culturally, ideologically, politically and socially.

Dickinson was not the only school that I applied to, but it was the first school to reach out and welcome me to the international student community. Before coming to Dickinson, I was not quite sure of what liberal-arts education was about, but I liked the idea of being well-grounded in different subjects. If each of us lives a multifaceted life, why would we ever want to confine our knowledge and our study to only one field?

Tome. Math majors have a saying: “Tome is home.”

I have been in love with mathematics since elementary school, but throughout my K-12 years, I had a lot of doubts because of the stereotype that girls can’t “do” science and math. This makes my experience in the mathematics department at Dickinson more special for me because here, the professors, staff and my peers have been supportive, which helps me believe more firmly in myself and my pursuit of mathematics. For example, we have an initiative called Inclusivity in STEM, with activities like discussions of books about promoting diversity in the science departments, and as a woman of color, I feel empowered.

As a student in the quantitative economics major, which is fairly young as a major at Dickinson, I have the chance to experience the major as a student as well as a quantitative reasoning (QR) tutor, helping professors build their pedagogical strategies. Additionally, my major opens my eyes to different interesting aspects of the world that I had never noticed. For instance, my Natural Resources class has a final project for which my group decided to research mica (a mineral resource) and child labor heavily used in the mica industry, which consequentially leads to low literacy rate and cyclical poverty for families in the Jharkhand region of India. This truly opened my eyes, as I had always overlooked this minor ingredient in cosmetics products.

This is a hard question. I have a tendency to like a lot of things at the same time.

My learning journey at Dickinson has been very enjoyable, and I like my classes a lot. As of now, my favorite classes would be Abstract Algebra (where we learn about something so abstract but with such simplistic and realistic applications) and Life and Death in the Age of Samurai and Geisha (which I took to fulfill a general graduation requirement, but it was so captivating and fun to look back into history).

One special learning experience was the A Good Life Retreat. I dedicated a whole weekend on a trip with some professors and staff members to take a pause from campus life and question what our aspirations in life are and how we can live a “good life.” I had never given much thought to this topic. It was a unique experience, listening to others sharing their stories, thoughts and aspirations.

… Leonardo da Vinci, meaning a person who can excel at a lot of things. I had multiple dreams when I was a kid: ballerina, lawyer, teacher, librarian, painter, writer, mathematician and independent person (with a cat).

I studied abroad in Toulouse, France, and it opened my eyes. There are so many great memories about my semester abroad, but this experience was defined by these three things:

Last summer, during the full swing of the pandemic, I had a remote internship at Equitable Life Insurance Company, and it was my first professional exposure to the career path that I want to pursue. Although the mathematics department had a few courses that relate to actuarial science, this is still a completely different field that requires a lot of self-studying and adaptability. Before this internship, I had only a vague idea about the work of an actuary, but after the experience, I became more informed about the profession, as well as more interested in the work. I have also gained a significant amount of experience with SQL, a programming language used widely in the field, and became more aware of the support structure available to newly graduated actuarial students. It was a unique experience as well, since I did it remotely, so learning how to balance things out without getting screen fatigue was another lesson that I learned.

I can do it. Throughout my Dickinson experience, the word “it” has been replaced by so many things: learn a new language, pack everything within 24 hours (to return to campus from studying abroad, when COVID hit), apply to graduate school (and get admitted!), self-study for actuarial exams, learn multiple programming languages in different classes, or simply cope with uncertainty caused by not only COVID but also life in general. I used to overthink and doubt my ability to achieve what I want, and sometimes I still get scared about the journey ahead of me, as any normal graduating senior would be. However, now I think that I have found a new source of confidence in self-reliance, and even though there are a lot of things that I am still not sure about, I feel ready and prepared to face those challenges.

I’m going to graduate school! I got admitted to a master’s program in Europe called Erasmus Mundus—Models and Methods of Quantitative Economics (QEM)—along with a governmental scholarship. This is a selective program with fewer than 50 students in each class, hosted among five universities scattered all over Europe, so I will be in Venice, Italy, and Paris, France. This is a great opportunity for me to dive deeper into mathematics and quantitative economics, which I became interested in at Dickinson. I am really excited about this opportunity!

I think that college should be a time dedicated to defining oneself just as much as to learning about the outside world. I used to brush my own voice aside and tried to absorb as much knowledge about the world as possible, thinking that it would put me ahead of the game. While it is still true that being skillful in certain areas is a great advantage, I find it just as important to listen to myself, to know who I am and what I am capable of, and to balance between my own needs and my responsibilities to the world. It is good to know that if the world is a big forest, I don’t have to compete with others all the time but take it at my own pace, and one day I can grow tall too.

This is for my fellow seniors: For those who have post-graduation plans, congratulations. For those who are still looking, I may not know who you are, but I believe that you can achieve what you want. I just received my admissions offer recently, so a week ago, I was in your shoes, feeling uncertain about the future. But I think you are doing great. Keep walking, even if it feels like only small steps. I may not know you in person, but I believe in you.