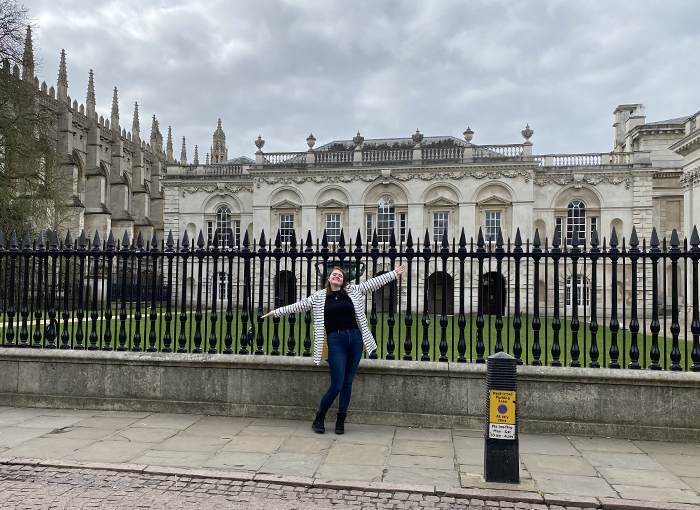 “The best thing [about Dickinson] is being able to explore so much outside of my majors,” says Nina Spoelker ’21. “I split most of my time between math, economics and doing technical theatre with the Department of Theatre & Dance and Mermaid Players.” Thanks to the interesting connections she's made, she's found friends across campus and has gotten involved in interesting work, including a series of video interviews that put her in touch with students, alumni and faculty from Dickinson's theatre & dance department. After graduation, she’ll work alongside fellow Dickinsonians at Enterprise Knowledge, a forward-thinking consulting firm founded by Zach Wahl ’98.

The Night Circus by Erin Morgenstern.

Intro to Number Theory. Associate Professor of Mathematics Jennifer Schaefer taught it last semester (when everyone was virtual), and she did a fantastic job tailoring the course to be taken entirely online. It was a small class, and we worked in different breakout rooms every time, so we all knew each other pretty well by the end of it. It was also a bit of a departure from the general curriculum of the math major, which was fun to explore. We ended up studying book ISBNs and cryptography, which was fascinating!

The Green Room, next to Mathers Theatre, in the HUB.

Assistant Professor of Theatre Design Kent Barrett. Even though I worked with him indirectly throughout my first year, my first big stage management experience was his project Paradiz’d, a reimagining of Paradise Lost, at the beginning of my sophomore year at Dickinson. Since then, I’ve stage managed thrice more under his supervision and taken Intro to Stage Technology with him and Professor of Theatre Sherry Harper-McCombs. Now I work for him directly as media assistant for the Department of Theatre & Dance. He’s helped me become a skilled theatre technician, a more confident stage manager and an all-around better leader.

Sriracha chicken and waffle fries (I miss them!).

I studied abroad in Norwich, England, during the spring semester of 2020 (which was, unfortunately, when the COVID-19 situation kicked into high gear). I’m grateful that I was able to almost completely finish the semester before being sent home, and I wouldn’t trade the friendships I made or the courses I took for anything. Being able to travel so easily around Europe, even for small excursions—and being able to connect where we were back to what we were learning—was exciting! And taking classes that weren’t offered at Dickinson, like Actuarial Science, was a great experience. But I’ll never forget walking almost two hours, there and back, to visit Grantchester with some friends, just to see the church where they filmed a television show we all watched.

… a novelist. But once I hit high school and started taking math classes with really great teachers, I completely flipped to the STEM side.

About my video series:

I work as the media assistant for the Department of Theatre & Dance, and my supervisor, Kent Barrett, and I created a livestreamed panel discussion series [for the Department of Theatre & Dance YouTube channel] called Trip-Tick-Tock. We interview a current student, a graduate and a member of the Department of Theatre & Dance faculty, and we have a different topic for each week, depending on the concentration of the faculty member—and we designed it to last 15 minutes or less (to cater to a wider audience). We’ve had great success with discussions about things like feminist theatre, devised dance and costume construction, among others. We try to cover a wide variety of theatrical topics and interests so we can bring in cool alumni and connect current students with professionals. It’s really interesting to hear how their viewpoints differ as they hone their craft and how perspectives change with experience!

I really like to crochet and embroider, so I’m all about textile crafts and amassing large quantities of yarn. But a slightly stranger hobby of mine is keeping up with entertainment news. I like to know exactly who is in any given television show or movie I’m watching, and then I kind of play the “six degrees of Kevin Bacon” game with myself to connect the actors and crew.

I think the best thing about attending Dickinson is being able to explore so much outside of my majors. I split most of my time between math, economics and doing technical theatre with the Department of Theatre & Dance and Mermaid Players; in doing so, I've forged connections with students and faculty, both academically and socially, and I'm able to experience and cultivate Dickinson’s amazing theatre community while meeting some of my closest friends.

So far, securing a job for after graduation! I’ll be working at Enterprise Knowledge, thanks in no small part to the numerous Dickinson grads who work there as well. It feels great to have a plan in place and not have to worry about the unknown (in this respect, at least).