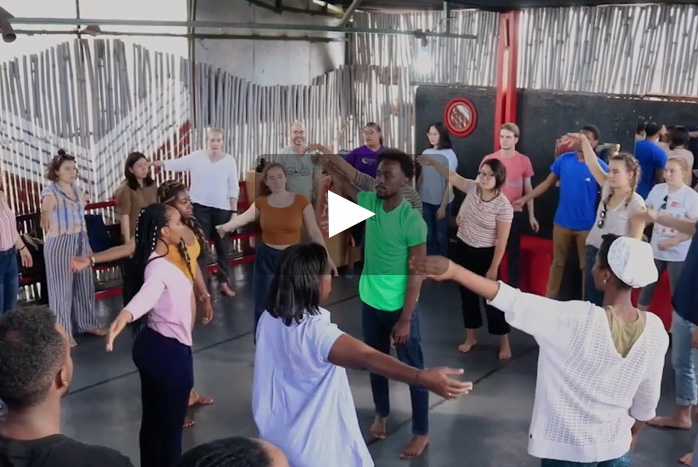 Dickinsonians recall speaking with survivors and perpetrators in Rwanda

It’s been half a year since nearly two dozen Dickinson students spent two weeks in Kigali, Rwanda, as part of the spring 2019 After Genocide and Apartheid Mosaic. As the students prepared an exhibition of photographs from the trip and an accompanying catalogue of writings, they and their professors paused to reflect on the extraordinary experience they shared.

The Rwanda Mosaic is one of a series of immersive semesterlong, multicourse programs at Dickinson that include classroom study and on-the-ground original study and research. Held during the 25th anniversary year of the Rwandan genocide, the spring 2019 Mosaic focused on understanding the historical and political context of the 1994 genocide and the decadeslong process of justice, reconciliation and reconstruction that has followed.

Fifteen students on the trip were enrolled in Associate Professor of History Jeremy Ball's and Visiting International Scholar in Philosophy Jean-Pierre Karegeye’s Peace, Justice and Reconciliation After Genocide and Apartheid class, and six were photography students from Visiting Lecturer in Art & Art History Andy Bale’s The Natural and Social Landscape course. During the first week of the trip, the students focused on the genocide, during which an estimated 1 milliion Tutsis were killed. During the second week, the students focused on reconstruction efforts and on Rwanda of today.

The trip included a visit to the site of a massacre, and a discussion with people who were on opposite sides of the conflict.

“Seeing them talking to each other—and they're having a whole conversation, laughing together, and have their own families mingle with each other—and then hearing the narrative of how they’ve healed, it was very moving for me,” says Ball. “We sat outside on the grass, and I think you could’ve heard a pin drop when they spoke, because it was so intense. I don’t think it’s an experience I’ll ever forget, and I think we all felt the same way.”