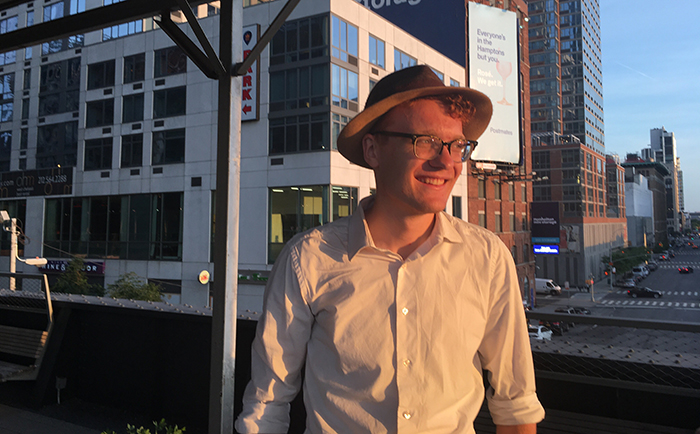 While studying abroad in Italy, Cormac Stevens '20 (English, Italian studies) conducted original research on the overlap between theatre and art in 18th-century Venice. Then he wrote his research paper entirely in Italian! The summer before Dickinson, he hiked the 273-mile Long Trail, running from Massachusetts to Canada.

For English: I took English 220 with Professor of English Wendy Moffat and immediately was hooked on theory and close reading. For Italian: It just happened that I took Italian with Lecturer in Italian Luca Trazzi as my language my first year, and I fell in love with the language and the culture.

The beef stew with the biscuits; it reminds me of the stew my mother makes.

Professor Wendy Moffat; I’ve taken three classes with her, and they have been both the hardest and the most rewarding courses that I’ve taken at Dickinson.

The summer after my senior year of high school, I hiked the Long Trail, which is a 273-mile trail that goes from Massachusetts to Canada through Vermont. It took 20 days.

I bake bread and desserts in my free time; I have an Instagram devoted to photos of things I’ve made.

My friend Noah Fusco, who graduated last year, has been a great influence in my academic and personal life; from him, I learned how to have confidence in my opinions and how to live my life in a more examined way.

I studied abroad in Bologna, Italy. One of the highlights was getting the opportunity to teach the other Italian studies students how to make pizza from scratch. It was incredible to be in a place with such a strong food culture, and to get familiar enough with it to be able to teach others.

On conducting research while abroad:

While I was in Italy, I did an independent study on the overlap between art and theatre in 18th-century Venice. Part of it was historical analysis, comparing artists like Tiepolo and Pietro Longhi to writers like Metastasio and Carlo Goldoni, and part of it was traveling to Venice to study original 18th-century editions of plays by Goldoni and analyze the engravings.

I decided to do this research because I took an art history class last semester and discovered a passion for it, and I thought I might be able to fold that into my interests in theatre and literature. It’s incredible to be doing research that I literally could not be doing anywhere else; it’s very difficult to find these particular editions of Goldoni’s plays outside of Italy.

During this process, I learned techniques to analyze historic editions of a text and to talk about art history and paintings. I also improved my Italian writing, as my final paper was in Italian.

In April of my sophomore year, I directed a play (Circle Mirror Transformation, by Annie Baker) as a lab show, which are student-run productions that the theatre department provides the spaces for every year.

… CO2 concentrations wouldn’t be rising at an alarming rate, and even if they were, our government would have the wherewithal to do something about them.

There are no details so small that they should go unnoticed; it’s always better to think too much about something than to skip over something important accidentally.