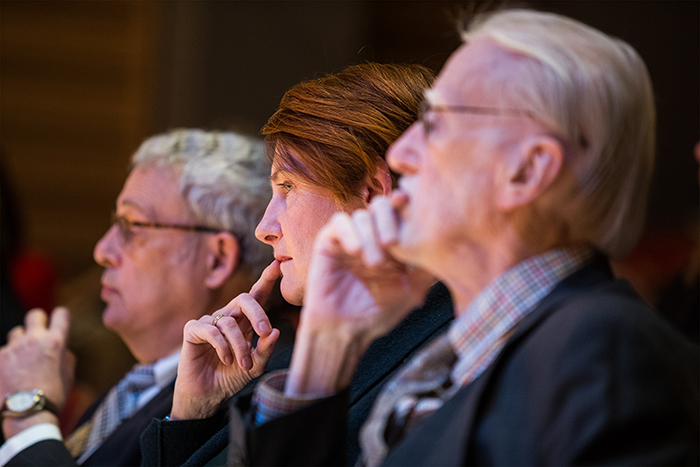 Actor Donald Moffat moved seamlessly between stage and screen, appearing in about 80 U.S. stage plays, 60 television productions and 70 Hollywood movies throughout his decadeslong career, perhaps most memorably, as the corrupt president in Clear and Present Danger (1994). The acclaimed character actor and two-time Tony nominee was rarely in one place for long, finding community in his family and with fellow traveling creatives who followed the work where it led. So it's somewhat curious that he discovered an affinity with Dickinson, a community rich with a sense of history and place.

More than 60 years after Moffat launched his career as a young classically trained character actor, his daughter, Professor of English Wendy Moffat and her husband, Donald Kaufman, established a Dickinson scholarship in her late father’s memory, enabling students with similar passions to achieve their own potentially transformative education. The newly established scholarship fund honors a life of exceptional accomplishment and a family connection to a vibrant academic community. 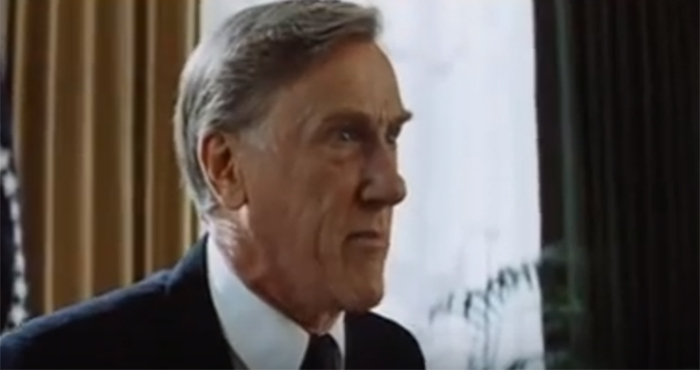 Donald Moffat as the president in the 1994 trailer for Clear and Present Danger.

Born in 1930 in Devon, England, Donald was the studious and imaginative only child of Kathleen and George Moffat, who owned a modest boarding house in their small, rural town. At about age 16, he took in his first theatrical production, Oklahoma!, during a Scout Association trip to London. As the curtain went up, and the American singer Howard Keel burst out in a full-throated rendition of “Oh, What a Beautiful Morning,” a vocation—and a lifelong appreciation for the optimistic American spirit—was born.

Moffat earned two scholarships and used them to enroll at the Royal Academy of Dramatic Arts (RADA), rather than the expected Oxford or Cambridge. “No one from his town had ever done that,” his daughter remembers. “Of course, as he told us, it helped that there was a ‘Royal’ in the name.”

RADA opened up a colorful new world to the young man, the first in his family to attend college and one of few in his town to venture outside of the region. In London, Donald married and performed with the venerable Old Vic theater company. When he and his new family moved across the Atlantic in 1956, he set his sights on Broadway.

In the U.S., he made his Broadway debut in Dylan Thomas’ Under Milk Wood (1956). He went on to appear in 18 additional shows, sharing the stage with Vivien Leigh in Duel of Angels and Jason Robards in The Iceman Cometh. In 1967, he was nominated for a best-actor Tony award for two different roles in one year, and in 1983, he earned an Obie. According to The New York Times, when he played Falstaff in a 1987 Central Park production of Henry IV, he was “the indisputable star.”

His first film credit was Rachel, Rachel (1968), starring and directed by Paul Newman. Other memorable silver-screen appearances, in addition to his role opposite Harrison Ford in Clear and Present Danger, are The Right Stuff, in which he portrayed Lyndon B. Johnson; Cookie's Fortune; and The Thing (he was the last person to die). On television, he appeared as Dr. Marcus Polk in One Life to Live, as Rem in Logan’s Run, as the lover of a transgender woman in Tales of the City. In his heyday, the ’70s and ’80s, he commonly did several plays, a half-dozen television appearances and one or two movies every year. 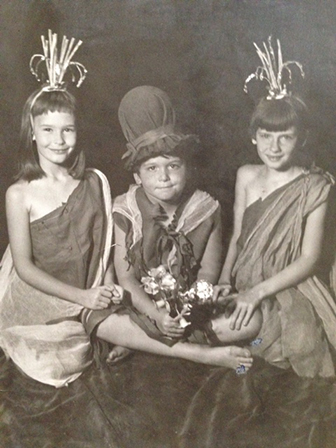 Wendy was born in England and moved with her family to America as a toddler. As a young girl, she eagerly soaked up the creative vibes, hanging out in the green room during theatrical runs. Listening to Shakespearean plays from backstage, she fostered a love of the written word. She also made memorable appearances, at about age 5, as the dead boy in Henry V and Mustardseed in Midsummer Night’s Dream.

After earning bachelor’s and master’s degrees in English at Yale University, Wendy came to Dickinson in 1984. She garnered her Ph.D. from Yale one year later.

Her interests include modernism, literature and sexuality, biography, and literary theory, and her biography A Great Unrecorded History: A New Life of E. M. Forster received the Biographer’s Club Prize in 2010 and was runner-up for the PEN Biography Prize in 2011. In 2015, Wendy was awarded an American Council of Learned Societies Fellowship to write Wounded Minds, a book on the American experience of PTSD in World War I.

Over the decades, Wendy has forged lasting relationships with colleagues and students. She was the recipient of Dickinson’s Ganoe Award for Inspirational Teaching, 1994-1995.

Deepening her work with the college, Wendy founded and administers the college’s yearlong program at Mansfield College, Oxford, and directed Dickinson’s UEA program in 1997-98. In 2017 Dickinson installed the professor of English as the second incumbent of the John J. Curley ’60 and Ann Conser Curley ’63 Faculty Chair in Global Education, recognizing her outstanding teaching, scholarship and service to the college. 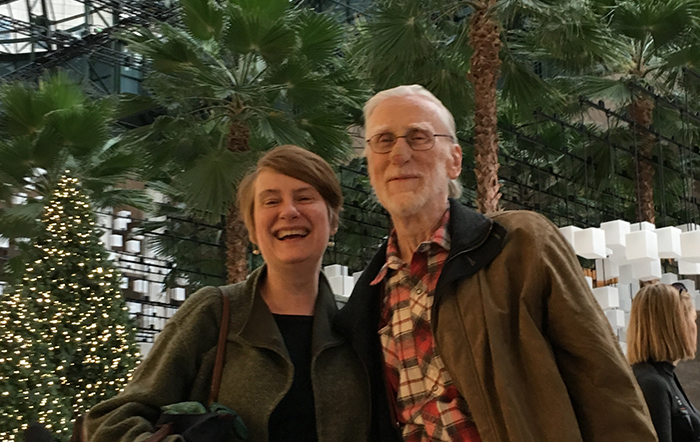 Throughout Wendy’s career, her father traveled to campus many times to take part in literary and arts events and ceremonies, most recently in 2017, to attend Wendy’s Curley Chair ceremony. When his granddaughter Sydney ’14 (Wendy's niece) was a theatre student on campus, he came to Carlisle to see her perform.

“He said, ‘You know, it’s an extraordinary thing to be a part of a community that is longstanding,’” Wendy recalls, “because his projects usually lasted only for the run, typically, at most, a few months.”

Last December the acclaimed actor died at home after a stroke, surrounded by children and grandchildren. When Wendy learned that he’d left his Actor’s Guild benefits to her, she decided to build on that modest sum to establish a Dickinson scholarship in his honor. 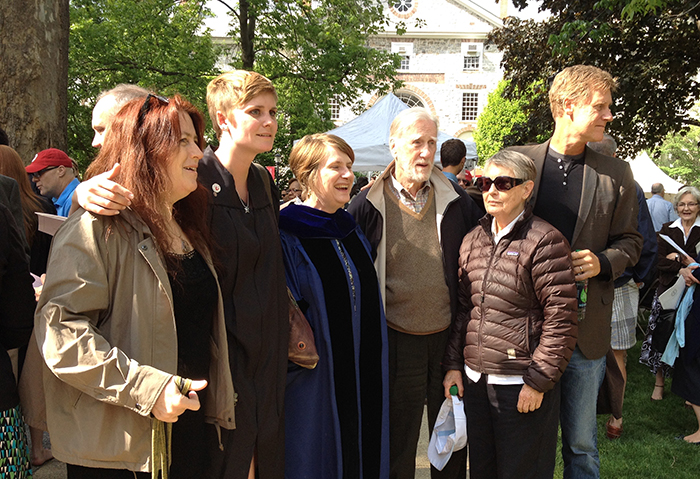 During one of his many visits to campus, Donald Moffat attended the graduation of granddaughter Sydney.

The Donald Moffat Scholarship Fund will benefit students with financial need who demonstrate an interest in the literary or dramatic arts, whether through coursework or on-campus activities, such as the Mermaid Players. An award will be made when gifts to the fund reach $50K.

“People care about this place for a lot of reasons, and he cared about Dickinson vicariously, through family, and he appreciated being able to be a part of it,” says Wendy. “He also never forgot that the pursuit of his dream was enabled by the generosity of others. So honoring him with a Dickinson scholarship feels right.”

Those who wish to contribute in memory of Donald may do so through Dickinson's Make Your Gift page (under "designation, select "other" and indicate "Donald Moffat Scholarship Fund." Questions may be directed to giving@dickinson.edu or 800-543-3809).