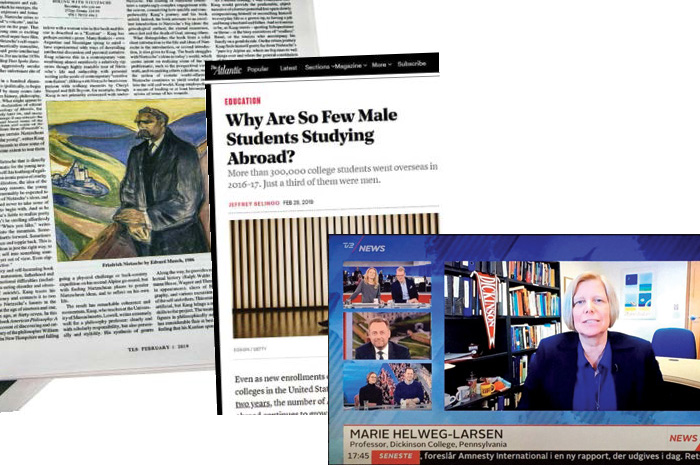 Dickinson faculty members and administrators continue to be go-to sources for major media outlets, from The New York Times and The Wall Street Journal to NBC News and NPR. This winter, their research made headlines in major journals, and their expertise was cited in a variety of trade publications.

Associate Professor of Psychology Suman Ambwani was the keynote speaker at the Center for Eating Disorders at Sheppard Pratt’s annual conference in Baltimore. In advance of that, the center published a Q&A with her titled “When Pseudoscience Becomes Trendy.”

Associate Professor of Music Lila Ellen Gray was interviewed about her book, Fado Resounding, on WARA radio in February.

Professor of Psychology Marie Helweg-Larsen’s latest opinion piece, “A Danish Word the World Needs to Combat Stress: Pyt,” was published in The Conversation. Pyt was voted the most popular word by Danes. Its closest English translation is “Don’t worry about it.”

Associate Professor of Physics & Astronomy David Jackson, Associate Professor of Physics & Astronomy Brett Pearson, Natalie Ferris ’18, Ruthie Strauss ’18 and Hongyi Li ’19 had a second paper, “Measurements of Slit-Width Effects in Young’s Double-Slit Experiment for a Partially-Coherent Source,” published in a new open-access journal called OSA Continuum. In addition, Jackson published “The Mysterious Spinning Cylinder—Rigid-Body Motion That Is Full of Surprises” with a different set of Dickinson students (Julia Huddy ’19, Adam Baldoni ’19 and William Boyes ’19), which was featured on the cover of the American Journal of Physics.

Research by Associate Professor of Psychology Sharon Kingston, in collaboration with the Columbia University School of Nursing and Mailman School of Public Health, was featured in key consumer and trade media, including Crain’s Health Pulse, Healthline and Medical Xpress. Their study on undiagnosed asthma in adolescents was published in the Journal of Urban Health.

Part-time Associate Professor of Religion Ted Merwin’s op-ed, “What Hanukkah’s Portrayal in Pop Culture Means to American Jews,” was published in The Conversation and carried by the Associated Press.

Assistant Professor of Political Science David O’Connell and his new research on Instagram use by members of Congress were referenced on the NPR Politics podcast. O’Connell’s research, “#Selfie: Instagram and the United States Congress,” was published in Social Media + Society.

The Chronicle of Higher Education published an essay by Professor of Creative Writing and Writer-in-Residence Susan Perabo. In it, she recalls the support she received from students—past and present—while promoting her latest novel. An excerpt was published in the spring issue of Dickinson Magazine, and you can read the complete essay here.

Professor of History Matthew Pinsker was quoted in the Illinois Times story “Lincoln: Boss or Compromiser?” He and several of his student researchers were interviewed by The Sentinel for the Dickinson and Slavery project. ABC27 also broadcast a story on the project.

Following the death of President George H.W. Bush, Professor of History Karl Qualls provided expert commentary on Bush’s handling of relations with the Soviet Union and his response to the fall of the Gorbachev regime for History.com.

Associate Professor of Philosophy Crispin Sartwell’s op-ed “What’s Worse Than Facebook?” was published in The Wall Street Journal. Sartwell also was quoted extensively in The Christian Science Monitor story “In #MeToo Age, Can We Love the Art but Deplore the Artist?” He also published “The Oscars and the Illusion of Perfect Representation” in The New York Times and “Bend Into the Mountain,” a piece about Friedrich Nietzsche, in The Times Literary Supplement.

Associate Professor of American Studies Cotten Seiler was quoted in a New York Times opinion piece on Green Books. The Pittsburgh Post-Gazette republished Seiler’s widely read op-ed, “ ‘Traveling While Black’ Guidebooks May Be Out of Print, but Still Resonate Today,” which was originally published in The Conversation. Seiler also was a live guest on WITF’s Smart Talk discussing the guidebooks in advance of the Oscars.

Samantha Brandauer ’95, associate provost and executive director of the Center for Global Study & Engagement, who has studied the gender gap in study-abroad participation, was
quoted in The Atlantic’s story “Why Aren’t More Men Studying Abroad?”

Vice President for Enrollment and Dean of Admissions Cathy McDonald Davenport ’87’s article “Transferring From One College to Another—Successfully” was published in Collegiate Parent magazine. Cathy also was interviewed by The Wall Street Journal for “Colleges Mine Data on Their Applicants,” a report on demonstrated interest in the admissions process.