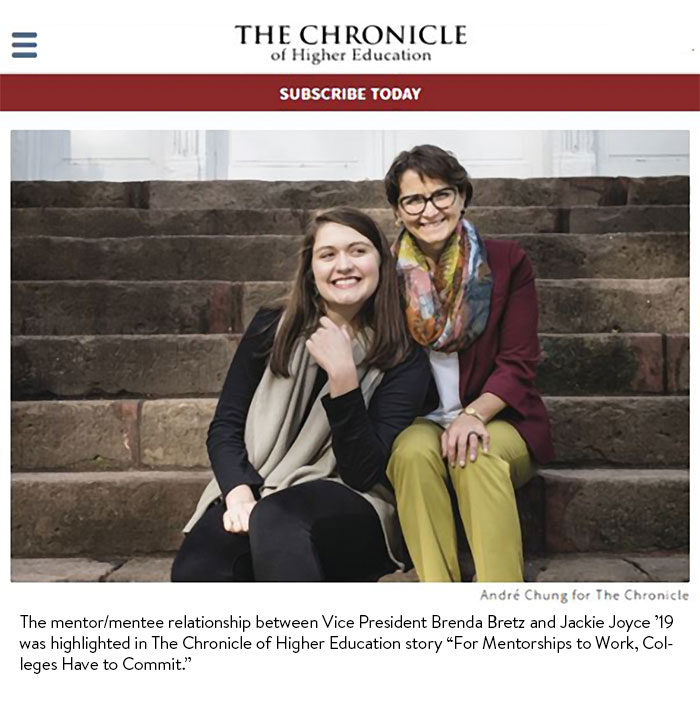 Dickinson made headlines throughout the fall, from our program to identify and support struggling students being highlighted in The Washington Post and Hechinger Report to our mentoring culture being featured by the Chronicle of Higher Education to our faculty commentary and coverage everywhere from The Economist and The New York Times to CNN and WHYY.

The Associated Press report “Saudi Arabia Uses Ancient Tourist Site to Alter Its History” quoted Professor of History David Commins and his interpretation of the teachings of Sheikh Mohammed Ibn Abdul-Wahhab. The report was published in Egypt Independent, Time of Egypt, Newsday, The Bismarck Tribune, Newser, The Charlotte Observer, Post Bulletin and more than 23 other outlets. In May, Commins was quoted in a story in Vanity Fair, “Meet Haifaa al-Mansour, the Saudi Woman Challenging Riyadh—and Hollywood—to Evolve.”

Assistant Professor of Political Science and Latin American Studies Santiago Anria commented on predicted tensions between President Trump and Bolivian President Evo Morales at a U.N. Security Council meeting for a story in The Washington Post.

Professor of History Marcelo Borges, whose scholarship on company towns has been referenced by numerous national and international media outlets, was quoted in the story “Are You More Like Facebookville or Googletown?” published in the Swiss newspaper Le Temps. He also was quoted by Clarin, the newspaper with the largest readership in Argentina, for the story “Controversial Proposal: Donald Trump Wants to Abolish Citizenship for the Children of Immigrants Born in the United States.”

Professor of Earth Science Ben Edwards was interviewed and quoted by Live Science for a story on the 1980 eruption of Mount St. Helens.

Professor of Mathematics Dick Forrester published “A Comparison of Algorithms for Finding an Efficient Theme Park Tour,” in the Journal of Applied Mathematics. This paper was coauthored with James Midkiff ’17, who worked on the project during a student-faculty summer research project in 2016, along with colleagues from Furman University, including Associate Professor of Mathematics Liz Bouzarth ’03.

Assistant Professor of Political Science Kathleen Marchetti was quoted in the CNN story “Will Thousand Oaks Be the Mass Shooting That Spurs Change? Maybe Not.” She also was the featured expert in a Q&A published in the Spanish newspaper Berria, the largest Basque-language newspaper, serving the Basque Country in northern Spain and southern France.

Director of the Milton B. Asbell Center for Jewish Life Ted Merwin’s opinion piece titled “Yom Kippur: A Time for Feasting as Well as Fasting” was published in The Conversation and Newsweek.

Professor of English and Environmental Studies Ashton Nichols discussed the history and impact of Mary Shelley’s Frankenstein as a live guest on WITF’s Smart Talk and ABC 27’s Good Day PA in recognition of the novel’s 200th anniversary.

Assistant Professor of Political Science Sarah Niebler was interviewed and quoted by FiveThirtyEight for a story on voter canvassing and by WHYY (NPR member station, Philadelphia) for a post-midterm election story looking ahead to the 2020 presidential election.

The 2018 Constitution Day address, featuring Professor of History Matt Pinsker as moderator, was broadcast on C-SPAN.

Roven Records released The Orbit of the Soul, a setting of Oscar Wilde’s texts by Professor of Music Robert Pound. The recording features contributing faculty in voice Jonathan Hays and a frequent guest of the department, pianist Craig Ketter. The work was originally commissioned by the Clarke Forum and was premiered on Nov. 1, 2000, by Professor of Music Jennifer Blyth with then-voice faculty member Lynn Helding. The recording was made in Rubendall Recital Hall in August 2016 and was the first official usage of the college’s new Steinway piano, thanks to coordination by Blyth and support from college piano technician Keith Bowman. The recording is available on iTunes and Amazon, as well as Naxos’s Music Database.