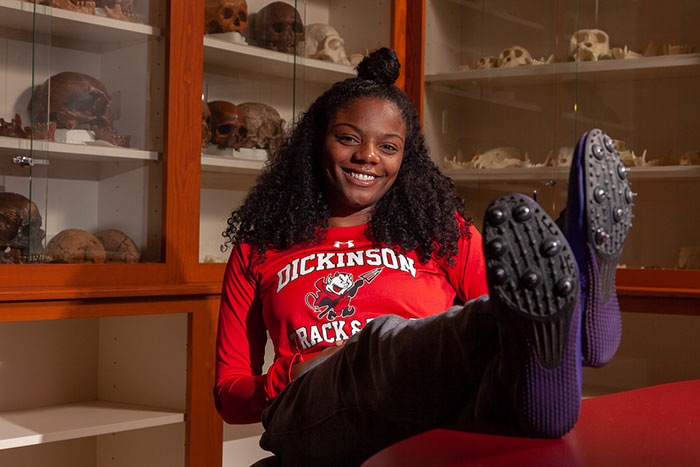 At first glance, Naji Thompson ’19 appears to be your average college senior. She likes to read, write, hang out with her friends and play sports. But there’s much more to this Africana studies and anthropology double major.

Hailing from Springfield, New Jersey, Thompson knew she wanted to continue the momentum she’d built in high school sprints and short-distance relays by joining college indoor and outdoor track and field teams. She also knew that whichever college she committed to, it had to be one with extensive global study offerings to satisfy her dreams of studying abroad. That, mixed with the energy she felt on campus, led her to Dickinson.

Thompson’s freshman year brought a new set of challenges, and learning to balance life as a student-athlete was a difficult task. “I felt tired, slow and like I could barely qualify,” she says.

But in her sophomore year, Thompson took first place in the 100-meter dash in the Centennial Conference meet and qualified for the NCAA All Academic award, which requires a minimum cumulative 3.0 GPA and completing the season among the top 50 individuals in the nation. Thompson is also a key component of the 4x100, 4x200 and 4x400 relay teams, as well as the 60-, 100- and 200-meter dash. She holds the school record in the 60-meter dash in addition to taking home countless CC medals. Perhaps the only thing that outshines her success on the track is the quality of her character.

"When observing Naji at practice, one is immediately aware of her outstanding work ethic,” says Head Coach Don Nichter. “She has always been willing to trust her coaches and commit to her practice routine with enthusiasm and attention to detail. She leads by example with her passion for the sport and a willingness to be challenged every day.”

Thompson stays as busy on campus as she does on the track. She is one of the founding members of the X House and a member of the Black Student Union. She also belongs to the 95th class of Wheel and Chain and is part of the Hera Society, an organization for collegiate women athletes in their senior year. She connects with prospective students as a student interviewer with the Office of Admissions and is a learning community coordinator. Most recently, Thompson  became a research intern at House Divided, where she works with a Dickinson faculty member researching how slaves impacted the history of the college and the campus we know today.

Following her study-abroad experiences in Tanzania and Cameroon, Thompson is considering pursuing a Fulbright in South Africa or a career in journalism, thanks to the research skills she’s honed. But most of all, what she wants is to leave behind a legacy. “I hope that people remember me,” Thompson says. “I’ve found value in connecting and creating bonds with lower-level students because of the relationships I formed early on at Dickinson.”